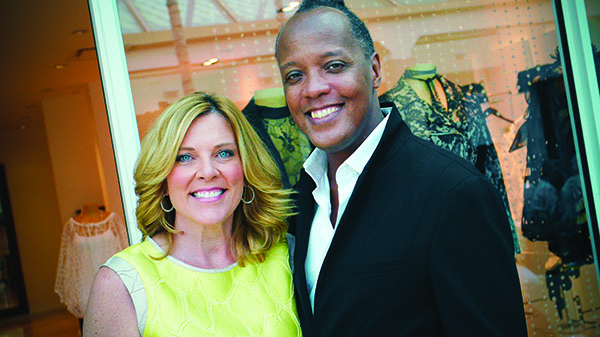 Hot. hot. hot. how else would you describe the Guadalupe Center’s Taste of Brasil in January under the white tent at Naples Botanical Garden? You had festive feathers, bright colors, alluring dancers moving to the beat. You had heated bidding that raised $600,000 for educational programs serving underprivileged kids. (And that included Eyk van Otterloo’s paying for clothes off the auctioneer’s own body—$15,000 for his tuxedo vest and another $2,000 for his suspenders.) Finally, in the midst of this Mardi Gras-in-Rio ambiance, you got to the heart of it all: young Ivan Giron-Cruz movingly describing his life of hunger, living with an alcoholic father in a trailer and his determination to be the first in his family to graduate from high school and attend college. Hail to the Guadalupe Center for its support of Ivan—and for putting on such a rousing evening under the tent.

Comedian and SATURDAY NIGHT LIVE alum Kevin Nealon put on a hilarious show in January at the Broadway Palm Theatre to raise money for HOPE Clubhouse. The organization helps people with mental illness find jobs and a place in society. And guess what? The owner of the theater, Will Prather, has hired two members of the clubhouse to work for him. Nice. Kevin’s parents, Emmett and Kathleen, who live on Captiva Island, were on hand for the laughs and good works. And Kevin got guffaws all around when he told the crowd he loves to come back to Southwest Florida “because you can always find a drugstore.” Happy to be healin’ with Nealon.

Talk about life of the party. This was a get-together at the home of Bill and Nancy Lascheid, founders of the Neighborhood Health Clinic. And the showstopper came when one of the couples there, longtime supporters of the clinic, got up and announced an anonymous gift of $10 million to the clinic’s William P. Lascheid, M.D., Endowment Fund. The guests responded with applause, hugs and tears throughout the evening. Said Nancy Lascheid, “Their financial support has saved many lives.” Anonymous is beautiful.

Check out the power lineup: Head Hooch (as she calls herself) Christin Collins, Heather Fitzenhagen, Sonya Sawyer, Gail Markham, Wendy Tooley, Diana Willis, Victoria Black, Cheryl Copham and Amy Sanford—for starters. They’re part of a new group of 250 women, called the “Impact Initiative,” working to raise money for the Golisano Children’s Hospital. They had their inaugural dinner at Christin’s home in January, and you get the idea they’re not people who take “no” for an answer. Be ready for their pitches, and remember the cause.

We’re accustomed to the spectacular from the Naples Winter Wine Festival. Amazing lots. Big-time bidding this past Januaryto raise $8.5 million for children in need. But there was a little something new and extra this year and it came at the conclusion of three of the Friday night dinners that took place in the Regent Condominiums. The hosts had arranged for 20 minutes of fireworks over the Gulf of Mexico 1,000 feet off shore. And what a grand finale for the night’s festivities, though some local residents, caught unaware,complained to authorities they thought they heard cannons and that the city was under attack. Must be a case of liking the original— the New Year’s Eve pyrotechnics— better than this sequel.

How about having a renowned designer as your personal shopper? That’s exactly what a dozen women got in January when they showed up at Saks Fifth Avenue in Naples to see Edward Wilkinson’s Lafayette 148 resort 2013 collection. First, there was the runway show and then Wilkinson provided each guest with personalized wardrobe advice. Bonus points to be sure for their fashion outing. Wilkinson told me he loves how the ladies dress here: “Lots of color, lots of style.” Guess he’s discovered our secrets.

Interior designer Thom Filicia, a star of TV show Queer Eye for the Straight Guy, was in Naples in January at the newly opened Robb & Stucky to promote his new book, American Beauty: Renovating and Decorating a Beloved Retreat. He caught us up on the latest as he sees it: Greens are really coming back with a vengeance, Tina Fey (whose home he just decorated) is “a lot of fun and cool and stylish,” and he’s out of patience with over-decorated, overproduced spaces with no personality. We like his eye, as ever.