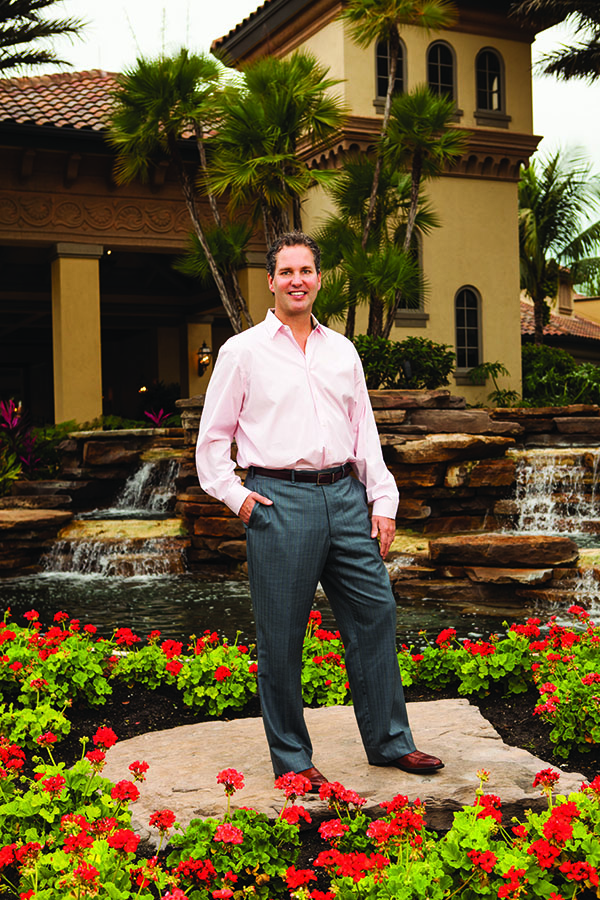 Ross Mcintosh has two mental lists, one good and one bad.

The first—the bad one—is the players most likely to collapse at the outset of the housing bubble collapse. The second—the good one—is the people best positioned to make money as Southwest Florida’s real estate market begins heating up again.

Here’s the funny thing: The same name is on the top of both.

“If you would have asked people in 2007 who is the most likely to be taken under by the housing market, everyone would have said Brian Stock,” says McIntosh, a private land development broker working in Naples. “Now, there isn’t a local company that’s playing in the same league as him. The only companies that can compete with him in the market are the national builders.”

So how is it that a 43-year-old Wisconsin native, whose only development experience had been in the boom years, went from being what many people considered overextended in one of the worst housing markets in America to being poised to make a Brinks truck load of money?

“You’ll have to ask Brian that,” McIntosh says.

Stock, the CEO and co-owner with his father of Stock Development, gives a very long answer to that question. See, Stock isn’t just a development company, and it’s not just a home builder. It has to be just about the most integrated real estate company in the region, with interests in everything from selling land and houses, lending and doing the title work to interior design, building pools and even running rental properties.

Short of milling the lumber and forming the concrete blocks, there are few portions of the home building and buying process Stock isn’t involved in, and that’s only because those are the businesses they used to run.

“We want to be as close to a one-stop shop for our customers as possible,” Stock says. “That’s sort of how we’ve always run our businesses.”

It would seem that having your hand in a bunch of companies that would all be losing money during a real estate apocalypse would be very, very bad for business. Make that doubly so when your exposure is in Lee, Collier and Charlotte counties.

“It actually helped us,” Stock says. “We weren’t locked into one thing; we had a lot of different ways we could operate.”

Stock development’s roots are in a family farm outside of Green Bay, Wisc. His grandfather started making extra money by pulling logs out of a river and milling them into lumber with another partner. Soon, his dad, KC Stock, was in the building business. At 19, KC was building houses where the home and the lot packages started at around $7,800. (As a point of reference, most of Stock’s homes start above $600,000 now.)

In 1980, KC Stock built a big lumber yard near Green Bay. At the time, some people thought it was a mistake. It was out along a highway where there wasn’t much traffic. But it turned out to be a shrewd move, and it propelled the company forward. By the mid-’90s, when Stock sold out to a larger company for what at least one person speculated was in the neighborhood of $500 million, the company was involved in just about every part of the building supply business, from manufacturing trusses to windows to cabinet assembly and building doors.

Brian, who by that time had been working in the family business for half a decade, stayed on with the new company for a few years. He was given the opportunity to move to Europe to manage a large division of the company. But he decided he missed working for family.

So in late 2001, he moved to Naples to start a development company with his dad. KC Stock had already been busy as a financial backer for several builders. He was the bank for Olde Cypress and Grandeeza. By the time Brian came to town, he was tired of standing on the sidelines.

“Dad couldn’t sit still; he was always looking for something to do,” Brian Stock says. That proves true today. Even though KC Stock has left the day-to-day operations of Stock Development to his son, he’s still involved as a sounding board for many big decisions. And he owns other companies, including a boat business in Green Bay, where he plays a larger role.

Driving his white Land Rover through the gates of Olde Cypress, off Immokalee Road, Brian Stock remembers how far the company has come since he started. He was buying used office furniture and working out of his apartment. Now he has a suite of offices on the campus of Hodges University. Stock Development’s first project was to build four homes in Lely Resort. Now, they’ve built or developed thousands of units and have about 2,000 more in the pipeline.

Looking back, it’s a bit easier for him to gloss over how tough the recession was for his company. He sort of shakes his head and says things about working hard to be in a position to succeed now. KC Stock has, perhaps, the benefit of looking at it from a slightly different angle. His skin is in the development game, but he’s not making the calls.

“There were times when it was tough,” KC says of the recession’s effects on his son. “But Brian was doing what he loves. When I would see him get down, I would say, ‘Do you want to go back to Green Bay and run the boat company?’

In talking about his business, Brian Stock often says things such as “sales velocity determines market price” and will break into extended conversations about lot premiums and takedown strategies.

But if you are with him for any period of time, you’ll realize he’s not really selling homes at all. Stock Development and all its subsidiary companies are in the business of one thing: marketing a lifestyle. From their sales brochures to the carefully decorated model homes, every detail is oriented to selling the lifestyle Stock and his team believe his customers aspire to.

Even the names of the communities inside the communities are carefully vetted before being submitted to county officials for approval. Before settling on Lantana, a 122-home development that will complete the Olde Cypress project, the team went through a raft of other names that they’d rather not share. You never know when one will be used again.

Perhaps it’s most telling that the first order of business to restore the sales potential of Quail West, the troubled 1,180-acre community off Bonita Beach Road where Stock just purchased the remaining 234 home sites, was to update the entrance.

“It’s the first impression when someone comes into a development,” Stock says. “We needed to create an updated look, a freshening up.”

Also on his sprucing up list was the community’s mammoth clubhouse and fitness facilities, spending about $20 million in the process. But if things go as planned, and he sells those 200-plus units off in the next three or four years, it’s money well spent.

Whether Stock can do that is the big question. Part of his gamble on Quail West, plus his position in Treviso Bay, is based on the idea that he’s going to control a good portion of the high-end luxury planned community market. There isn’t much space left in Grey Oaks, and what is left isn’t as prime as what is already developed. Once that’s gone, people who want to live in new construction in that quality of development are going to have to come to him.

McIntosh, for his part, isn’t completely convinced it’s an apples- to-apples comparison. Especially because it seems there is always another property coming online, not to mention the homes already built.

“It wouldn’t surprise me if he’s got (all the finished luxury lots available),” McIntosh says. “But that doesn’t mean he has no competition. He’s always competing with existing inventory.”

The walls of stock’s office off Immokalee Road are lined with memorabilia from his other passions—autographed Green Bay Packers gear and 50-inch trophy pike. Both football and fishing have offered another release for the hypercompetitive gene KC Stock says is strong in his youngest son.

“In high school, he had to be the best,” the elder Stock says. “And he was the MVP in three sports—baseball, basketball and football.”

Stock actually played college football at the University of Wisconsin before knee surgeries curtailed his career. After that, he transferred to the smaller Saint Norbert College to get his business degree, knowing that an education was the smarter play.

The same competitive nature might lead him to think about branching out to other markets, where Stock could grow the company. After all, there are only so many homes to build and sell in Southwest Florida. But so far, despite a little prodding from his dad, who suggested some work out in Montana, Stock is content to stay busy in his new home.

Maybe it’s the settling down process. After years of bachelorhood, he’s getting married. He’s got roots in Naples unlike any he’s had since he moved from Wisconsin. And he’s reached a pretty crucial understanding of happiness at work.

“Size doesn’t necessarily mean success,” he says. “For me, it’s fun to come to work every day. I’ve got a good, dedicated group of employees. And we’re really looking forward to what we can do.”