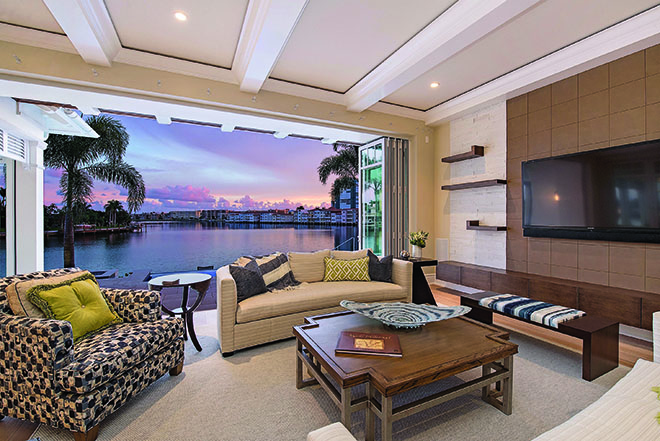 Former Chicago area residents Jim and Nancy Heinz had visited Naples sporadically through the years, first while spending time at a Marco Island condominium they owned and then, as their family grew to include five children, at area resorts.

Once they became empty nesters, the Chicago winters drove the couple to seek refuge, first in a Port Royal rental and then in a beach house perched on the dunes around 13th Avenue South. Every Sunday meant visiting open houses as they looked for a place to buy in the Old Naples area. Rarely did they venture north.

Their plan changed, though, as Jim took a Venetian Bay cocktail cruise after a golf tournament. From the water, he saw the sign that led them to purchase a Park Shore dwelling.

“I’m a view guy,” says Jim, who is the managing partner in a Chicago proprietary trading firm. “We just tried to catch the views as best we could.”

The existing home needed a few tweaks to get the most of its vistas, though, so they hired John Cooney, of Stofft-Cooney Architects, as they considered an addition and alterations.

“The house didn’t take advantage of the views at all,” says Cooney, who eventually suggested it be razed and replaced. “This was a teardown due to the design,” he adds.

The couple quickly put together the team with whom they would work, also meeting with Scott Weidle, of BCB Builders, after they’d viewed several BCB homes under construction. They moved into the completed house on Valentine’s Day in 2013. “It’s just what we wanted,” Jim says.

second. Cooney designed a luxurious floor plan of about 5,000 square feet with a large family room that opens

to Venetian Bay. A well-equipped outdoor living space incorporates a lap pool with infinity edging. A jacuzzi and fireplace pit were neatly tucked into the landscape, too.

“This lot deserved a nice home,” says Jim, looking out over the bay. “It’s such a significant view.”

The homeowners’ favorite spot in the evening is a small patio near the water where they enjoy watching manatees and other sea life play below. Jim has incorporated two LED waterproof lights that draw fish to the area.

“I love Park Shore,” he proclaims, talking of the area’s convenient location to their golf club in North Naples, to Mercato and to downtown. Nancy agrees, adding that the house is nicely positioned so that their visiting children can walk or bicycle to the beach, nearby restaurants and such.

Even the neighbors seem to agree that the Heinz home is perfect for the place where it sits. The Park Shore Association honored it with its 2013 Beautification Award for Best New Home.