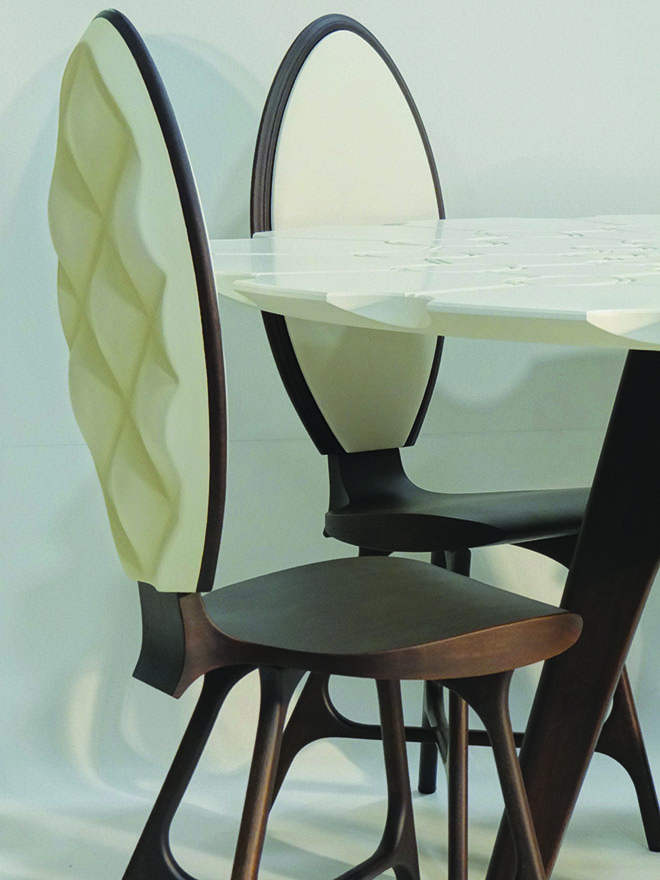 Matt Riley and Chad Jensen planned on making furniture for a long time. But for 10 years, road blocks kept popping up.

At first, the Thomas Riley Artisans Guild, of which Matt Riley’s father is the founder, wasn’t quite big enough to branch out. So Jensen, a Michigan native with an art and design degree, started as a woodworker.

Then, the economy tanked and the upscale clients, to whom the Artisans Guild provides ultra-high-end custom woodworking, suddenly weren’t looking to do major remodeling.

“We had to focus on keeping the company going,” Matt Riley says.

To read the entire article, pick up Gulfshore Life at select newsstands or purchase a copy of the digital edition. A full version of the story will be available on May 1. Or subscribe now to Southwest Florida's leading magazine.

Now, with the economy back in black, especially for those in the market for high-end custom pieces, Riley and Jensen have decided to launch Thomas Riley Studio. But instead of just being a home base for their furniture line, which they plan on unveiling in New York next month, the Naples Design District space doubles as a place for them to introduce their clients and the region to a host of other artists and artisans they admire.

Jensen has long sought to blur the line between the functionality of craft and the glory of art. Glance through his portfolio and you’ll see pieces that, while usable in a home setting, seem sometimes too ethereal to touch. When he exhibits his own work, he prefers it on a pedestal like a classical sculpture.

“I want to change the way people look at these objects,” he says.

He flips through the pages of his portfolio and stops on a desk he recently made for a local client by request. It’s stark white, glossy veneer with a glass top, but entirely made in heart shapes. It’s at once thoroughly modern and sophisticated and yet with a childlike quality that conjures an image of its user smiling every time she uses it.

There’s a similar sense of wonderment in the work of Ysabel LeMay, one of the artists Thomas Riley Studio represents. For years, LeMay has photographed flora and fauna around Naples. She then takes these digital images, cuts out the pieces in Photoshop and reassembles them into digital collages of breathless abandon and incredible precision.

Or take the work of wood turner Bud Latven, who showed at the gallery in March. His wood sculptures appear architecturally impossible and speak simultaneously of modernity and decay.

“Our clients are often designers or homeowners doing major renovations,” Jensen says. “So we thought it would be great to show them other artists we thought really fit in with what we are doing, with our aesthetic.”