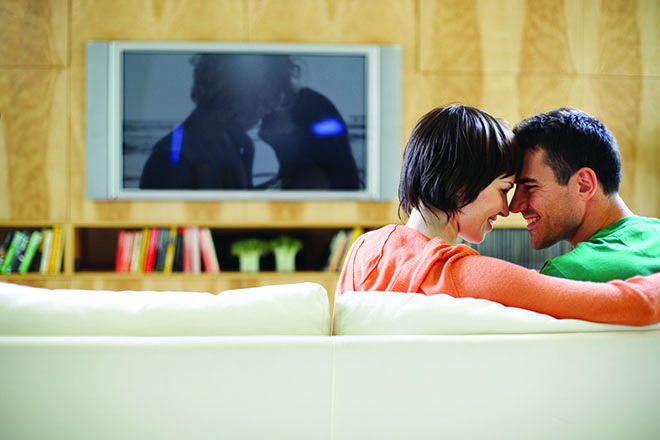 THE MOVIES THAT SAVE MARRIAGES

Well, this is great news for Nicholas Sparks. A recent study by the University of Rochester found that discussing a relationship movie can be as beneficial as couples counseling. That’s right, watching and talking about The Notebook or A Walk to Remember is as helpful as paying a professional to tell you what’s wrong with you. The study followed 174 couples over the course of three years and found that those who received marriage counseling or participated in movie intervention were half as likely to divorce or separate as couples who received no intervention. Researchers believe the movies are a nonthreatening way to create a dialogue. Check out couples-research.com for more information or to participate in new studies.

To read the entire article, pick up Gulfshore Life at select newsstands or purchase a copy of the digital edition. A full version of the story will be available on May 1. Or subscribe now to Southwest Florida's leading magazine.

EAT MORE YOGURT A study by the University of Cambridge suggests eating yogurt at least four times a week may help prevent Type 2 diabetes. Subjects who did had a 28 percent decreased risk of the disease.

Walkmans. iPods. Neptunes. What are Neptunes, you ask? Well, just as we’ve grown accustomed to wearing our iPods or other MP3 devices while jogging or working out, Neptune is designed to allow us to take our favorite tunes into the water. That’s right—music while you swim. Finis’s Neptune is a waterproof MP3 player that provides the highest possible sound quality underwater using bone conduction audio transmission to send sound through your cheekbone directly to your inner ear. For $159, it features 4 GB of storage, giving you the space for everything from audio books to the soundtrack of The Little Mermaid. Being alone with your thoughts in the pool is now all wet. finisinc.com/neptune

Since the dawn of time, vending machines have offered items that are about as nutritious as anti-freeze. Slide in a dollar bill and get artery-clogging goodies. But if you’ve spotted the new Well Vending vending machines that have popped up throughout Southwest Florida, you know that there is finally a vending company that has your best interest at heart. Eric Cioffi started the company in an effort to bring healthier choices to those of us who don’t tend to have the foresight to bring a snack from home. Everything from Annie’s Homegrown organic snacks to Clif bars to Kirkland Signature nuts to Blue Sky natural teas and sodas will satisfy your cravings and yet keep you from feeling guilty the minute you reach into the trap door. The company’s goal is to provide high-quality, healthier alternatives to traditional snacks and drinks. They’re currently in select gyms and hospitals, but are adding locations weekly. wellvending.com

HERBAL MEDICINE It seems that if you suffer from irritable bowel syndrome (IBS) you might want to consider taking peppermint oil as an elixir. Researchers at McMaster University say it is nearly as effective as over-the-counter medications.

Heads up! If that phrase recalls horrific and painful moments at the schoolyard, we may have bad news for you. It seems that in the late 1980s and early ’90s researchers began measuring the reaction time of 5,134 adults ages 20 to 59 by having them press a button as quickly as possible when a light flashed on a computer. After 15 years, they went back and checked to see who was alive. After factoring out variables such as smoking, heavy drinking and sex, the study found that those with slower reaction times were 25 percent more likely to die of any cause and 36 percent more likely to die of cardiovascular disease. Think fast.

GOOD AND GOOD FOR YOU

Have you finally decided to take control of your diet and eat healthy? We mean really healthy? We’re talking foods that are gluten-, sugar-, dairy-, grain-free? They’re next to impossible to find. And when you do find them, they taste like cardboard, or worse. Well, we’ve got great news: Some local entrepreneurs have taken it upon themselves to give us choices that don’t require us to go shopping for amaranth root and guar gum. For example, Epiphany Gluten Free Bakery of Naples offers a host of top-quality baked goods that are not only good for you, they taste terrific—to the point that you can eat their brownies and breads and not realize you’re eating healthy. They’ve got everything from paleo sandwich bread to cookies and even pancake mix. That’s right, we might actually be able to survive eating healthy. epiphanyglutenfree.com

SHIVER YOUR WAY TO THINNESS

The blistering cold suffered by much of the United States this past winter may have had a serious upside: fat burning. You might think that’s because people were shoveling or skiing more, but the truth is they were just shivering. A recent study showed that 15 minutes of shivering in the cold is the metabolic equivalent of one hour of exercise. Last year, scientists at the U.S. National Institutes of Health followed 10 healthy adults as they exercised in a 65-degree laboratory. Those same subjects were later told to lie on a bed in a room at 53 degrees. In both situations, the adults experienced muscle contraction, which produced a hormone called irisin that boosts body heat and creates brown fat cells (the good fat cells), which burn calories when stimulated. Too bad we live in Florida.

ART IN MOTION If you want exercise equipment but hate the look of it, check out Lunar-Europe’s new Vela cycle trainer. You could actually leave it in your living room. lunar-europe.com