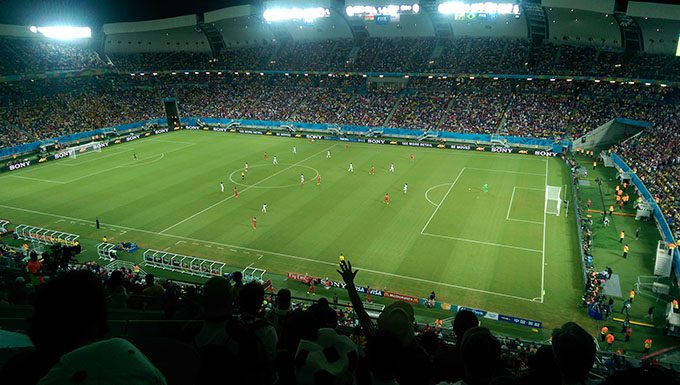 Soccer just may be on the rise in the U.S.

The Los Angeles Times reported Sunday that more World Cup tickets were sold in the U.S. than in any other country except (host country) Brazil. And we’re seeing that fan fervor close to home, through the local branch of unofficial men’s national team support group the American Outlaws (AO).

The nonprofit, which grew from three diehard fans in Lincoln, Nebraska, exists solely to support the United States’ national soccer teams, showing “unified and dedicated” support through promotion, watch parties and game attendance. As the AO website states, “In a sea of American football, baseball and NASCAR fans, we felt we were ‘outlaws’ of the sports world; supporting a sport that most people didn’t know much about or cared little about. We decided to take the moniker of the ‘outlaw’ and be proud of it.”

As of early June, the group was 20,000 members and 137 chapters strong. Florida alone has nine chapters: Pensacola, Miami, Fort Lauderdale, Tampa, Orlando, Tallahassee, Jacksonville, Panama City—and Fort Myers, which was created in 2012. AO Fort Myers boasts more than 100 members, a number its president, Boost Creative Web developer Stephen Cook, says is quickly growing after new signups from attendees of the USA/Ghana watch party this past Monday at their home bar, Fort Myers’ Titled Kilt. (For those of you living under a rock, the USA bested Ghana—who knocked us out of the past two World Cup competitions—by 2-1 in a real nail-biter on Monday). Cook says the chapter had to turn fans away because the location was so packed—and more than 400 attendees made it indoors before that point.

Through the AO travel package, Cook and his girlfriend, Chico’s textile designer Emily Epler, joined more than 600 American fans on two chartered 767 planes to Brazil. The group will be based in Natal for two weeks, traveling next to Manaus by plane for the Sunday match against Portugal and then busing to Recife for the Germany game. “We are crossing our fingers we advance, so that there will be more games for us to watch at the Tilted Kilt with our chapter members when we return,” Cook says. From Brazil on Wednesday, Cook updated Gulfshore Life via email on the festivities:

"Everywhere we have visited in Natal we see Americans walking around, as our fans have truly inundated the city. We've been told over 20,000 Americans were in Natal for the game, which does not surprise me after looking around the city, or in the stadium on Monday. Many of those fans were indeed AO members, though not all are in the AO trip with us. We've met Americans from all over the nation, who we've instantly become friends with due to our mutual love for the sport.

"At the game, I would estimate half of the fans were American, a quarter Ghanaian and a quarter Brazilian. The tickets we received through the ticket lottery were in the upper deck, but we could easily hear primarily American cheers wrapping their way around the stadium, making their way to the upper levels where even more fans joined in, strengthening the chants. The only time the cheers died down was after the equalizer by Ghana, when the Ghanaian fan's horns and drums were revitalized and were able to break through our cheers. This part of the game was especially nerve-wracking for us, as the game was tied and we began to realize the stadium was missing one key feature, a scoreboard. We've seen unfinished construction throughout the city and the stadium, and we are assuming the scoreboard to be another casualty of time running short. Without the scoreboard, there was no game clock, meaning we were unable to ascertain if our team had 20 minutes or 30 seconds to find the goal and put us back on top. Luckily, our nerves did not last long courtesy of a John Anthony Brooks header, which erupted the crowd into a frenzy. The stadium was at the loudest in this moment, with every American fan screaming at the top of their lungs, hugging each other and giving high fives to each other, and the handful of Japanese, Mexican and Brazilian fans that also dotted our section. Once our fervor was allowed to subside, we quickly remembered the absent scoreboard, and we began pleading for the ref to blow the whistle. Once stoppage time came, we knew our victory was imminent, and luckily the score line held."

Southwest Floridians can catch the next match, against Portugal, with the American Outlaws at the Tilted Kilt on Sunday at 6 p.m. Upstairs, the hot new music and comedy club Belushi’s will also be open to accommodate more fans.