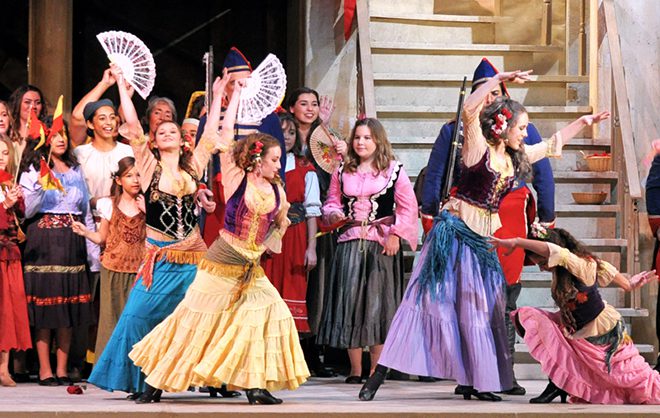 Just about any conversation I’ve had recently with local arts leaders has eventually come around to the Steffanie Pearce-Opera Naples situation. People have been speculating on the causes of her firing as the company’s artistic director, the revelation that she had trademarked the Opera Naples name herself rather than for the organization and her founding of a new Opera company.

Now the Opera Naples board of directors is speaking out. In a letter to supporters sent on Thursday, signed by CEO Carol Shaw and Board Chairman John Hushon, the company laid out its side of things.

Pearce rebutted each of these points in an email to Gulfshore Life this afternoon. Her full response is printed below the Opera Naples email.

Here’s the portion of the text dealing with Pearce in an email to supporters, which first discussed the upcoming season, finishing the season in the black for the first time,  and the hiring of a new artistic management team:

"Furthermore, we would like to clarify Opera Naples' position on the severance of Steffanie Pearce:

Several months ago, the Board of Opera Naples struggled with its decision to separate from its former Artistic Director, Steffanie Pearce. There were difficult issues which occurred over an extended period of time and after three years of discussion with Ms. Pearce, attempts to accommodate her demands were no longer possible. Finally, it was decided that we would offer a departure package, conditioned only upon her agreement not to disparage Opera Naples or to try to dissuade employees and valued friends from their continued support of our company. The Board and Management agreed not to discuss or elaborate on any details concerning this separation.

However, in the intervening two months, it became apparent that Ms. Pearce is exploiting our proposed separation arrangement for her own benefit and has distorted the facts in various releases and communications. With some reluctance, we decided we needed to set the record straight for our friends, many of whom have already indicated their understanding and support.

Various members of the Opera Naples "family" have met with her and reviewed her performance regarding the changing needs of our regional opera company for several years. We now know that more than three years ago, Ms. Pearce registered our trademark, in her own name, with the US Trademark Office and began planning the creation of her own Opera Company. She had also been threatening resignation and other unspecified actions throughout this period. The Board had been concerned about her resignation for some time, particularly that it would occur in the midst of the current production season.

The board finally determined that this separation was necessary, and although we offered not to specify the causes, there were indeed causes for this action: ongoing conflict and disagreement with the Board's strategy for the future of Opera Naples, the increasing need for budgetary discipline and transparency, the need for advance production planning (to secure top talent and productions), failure to cooperate with other team members, and verbal disagreement with and disparagement of other Opera Naples team members and Artists.

Some of you know that we have had to resort to litigation concerning our name, which we started using in 2005. Only in 2011, without notice to anyone at ON, (and while a full-time paid employee of the company), Ms. Pearce filed the trademark application for "Opera Naples" in her own name-stating in her application ( in a sworn affidavit) that she did "not know of any use of the name by any other party." The trademark was granted to her in 2012 without informing the Board of Opera Naples of her actions.

Ms. Pearce has now announced that she has created another opera company using many of the assets that were developed by our company over the last decade and a website which claims that the entire history of Opera Naples is solely her accomplishment. In late May, Ms. Pearce employed counsel to threaten Opera Naples with legal action if we continued to use our own name. We did file a lawsuit, not to deprive Ms. Pearce of "her property", but only to protect our name and continued existence.

We would have obviously preferred to avoid litigation. However, now it seems that an agreement is on the horizon which will guarantee us the ownership of our own name.”

“Yes I just saw it and am flabbergasted! It is so full of fabrication that I really don't know where to begin.

As I'm sure you have noticed, it is not my wish to instigate further discord in the artist community so I have not commented publicly until now. But, in light of the continued attacks, it seems appropriate to make a few comments.

The proposed separation agreement was; 6 months pay to immediately "Retire" from the opera business, or move away from my home to continue working in my chosen field of expertise. It was refused outright within 3 business days.

I never had a performance review except for former Exec Director, Tom Smith, telling me (in my annual review) that I need to use my spell check more often.

There was one written notice from incoming chairman Hushon delivered two months before my termination. My written retort to the three points of conflict stated in his letter was never discussed.

The only "team member" that I openly disagreed with was the new CEO, a complete outsider to the industry that I have working in for over 30 years.

As for my ability to collaborate well with other colleagues, you can easily check the facts.

It is true that I registered the trademark in 2011. It was a particularly tumultuous period in which I spoke out against questionable business practices and was, in turn, lectured on the REAL Golden Rule "He who has the gold makes the rules.”

The decision to register the name was made in an attempt to help preserve the core values of the company that my husband and I incorporated. Likewise, I never signed an employment agreement or a no-compete clause so that, in the event that my fervent attempts to keep the company together would fail, I could re-start. I do not recall threatening to quit. I did remind certain key individuals that I posses the wherewithal to re-start if we can not work out our differences-

There is no claim on my website that the entire history of Opera Naples is solely my accomplishment  (www.gulfshoreopera.org), it simply states the fact that the operas were produced under my artistic direction.”

Pearce also attached a letter in the email that she sent to Opera Naples patrons after her dismissal.

Here it is reprinted in its entirety:

“Thank you for your part in making Opera Naples one of the cultural icons of our community. I am writing to give you an update on some major changes at Opera Naples. Actions of the Board, taken completely without my consent or consultation, have led to a separation between myself and the structure of the opera company I founded.

There has been a conflict in management philosophies since the appointment of the current Chairman of the Board, Gerald Goldberg. I believe it is essential to our success that a healthy balance between the artistic and the business sides of the operation be achieved. As of this year, the Board has abandoned the transparent, collaborative style of management usually associated with performing arts organizations in favor of a top down corporate silo structure.

The only Opera Naples employee now permitted to exchange information with the Board is an absolute newcomer to the opera industry. Carol Shaw, the new Executive Director and CEO, was hired nine months ago and signed a three-year contract with the Executive Committee. I was not privy to any part of the hiring process and learned of her appointment through a press release.

The ensuing environment (in my opinion) has been non-conducive to the creative process and largely dysfunctional. Under Ms. Shaw’s leadership, my Artistic Administrator of the last 6 years was dismissed without notice to me or her two days before the first production of the season. I was repeatedly denied access to the production budget even while in mid-production. At board meetings, the treasurer reported on production budgets that I knew were incorrect, yet I had no power to prove the errors.

I was told that it is no longer my place to call donors and thank them for their contributions and my name was removed from the donor recognition letters. Still, I held on, hoping that newly elected board members could see the dysfunction and turn things around.

On May 2 Opera Naples produced Verdi’s Nabucco as part of the Arts Naples World Festival. I was in charge of the production budget estimate, casting, production design and stage direction. Of the six principle singers, four had major international credits. The performance was sold out and I came in $9,000 under budget. One week later Executive Director and CEO, Carol Shaw terminated my employment without cause and without discussion. Her action was backed by the board under Mr. Goldberg’s leadership, at his final board meeting after 8 years on the board. At no time during this year did any board member question any staff person about the working conditions under Ms. Shaw’s leadership. I believe that many of the members, especially those new to the board, were insufficiently informed to make such a monumental decision.

Since the board’s decision was final and a new Artistic Director has already been appointed, I now look towards my future opportunities. My legal counsel has notified them that I fully intend to exercise my right to continue to operate a professional opera company here in our community, under the Opera Naples service mark which is registered to me.

I did my best to keep the organization whole and while I regret that this re-organization will cause some hardship and confusion, it was the actions of others that brought us to this point. As we enter our tenth anniversary season, I hope that all those who have enjoyed the productions and programs initiated under my leadership, will continue to support Opera Naples, under my leadership.

I welcome the opportunity to meet with you individually to hear your thoughts regarding moving forward with the re-organization of Opera Naples.

For more information and to keep in touch with the future plans of Opera Naples NOW please visit  www.operanaplesnow.org or email me at [email protected].”

So it seems the battle for the operatic soul of Southwest Florida continues, likely to the detriment of local arts lovers.