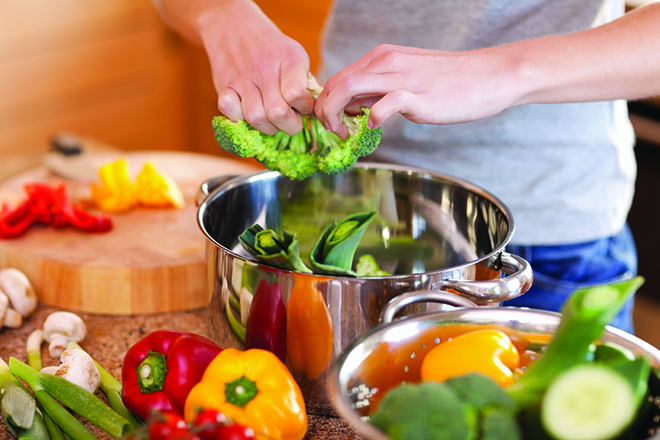 You’ve probably heard this before: Restrict your caloric intake, and you’ll be healthier and live longer. But now there is actual evidence that, if handled properly, a lower-calorie diet can both prevent some diseases and prolong life. A study that began in 1989 at the Wisconsin National Primate Research Center tracked the health of 76 rhesus monkeys. When they hit adulthood, half were allowed to eat whatever they wanted, while the other half were put on a strict and nutritious diet of 30 percent fewer calories. The results found that the unrestricted monkeys were three times more likely to develop chronic disease and die at any age. Researchers believe these results will translate to humans. So put down the cruller and pick up a carrot.

THE PROMISE OF YOUNG BLOOD

If ever there were a concept that was both gross and encouraging at the same time, this is it. It seems scientists have discovered that blood from young mice reverses aging in old mice, restoring muscle tone and rejuvenating brains. In two separate studies (likely funded by the Transylvania Medical Association), researchers found the old mice healed about as quickly as the young mice and were able to grow new liver cells at the same rate as young mice. It seems there are compounds in the blood of young mice that awaken the old stem cells, helping repair tissue and build neurons in the brain. It is the first step to possibly turning back our body clock.

BACK IN THE SWING

In this region, few things create more frowns and restless days than golfer’s or tennis elbow. The ailments negate a major reason most of us moved here. But there is a new minimally invasive procedure in Southwest Florida provided by Drs. James Guerra and Keith Spain at Collier Sports Medicine & Orthopaedic Center in Naples that will get you back in the swing of things in no time. The Tenex procedure allows physicians to safely and effectively remove the pain-generating diseased tissue while also stimulating a healing response. The procedure takes just 20 minutes under local anesthetic and requires no post-procedure physical therapy. In fact, most patients return to normal activity within two to six weeks with a success rate of more than 80 percent. colliersportsmedicine.com

WALK THIS WAY: A recent study from Stanford University found that walking at an easy, self-selected pace significantly increases a person’s creativity. Indoors or out, it makes no difference in creativity levels. Just walk.

Either the green tea growers association has the best lobbyists ever or this stuff really is a super-food. We already know it slows Alzheimer’s disease, helps with weight loss, eases anxiety and even helps prevent cancer, but now a new study shows that it sharpens memory almost immediately. Swiss researchers gave a group of men a beverage containing 27.5 grams of green tea extract or a placebo drink. They were then given a series of tasks designed to test their memory, while scientists examined their brain activity via MRI. The green tea group performed better. It turns out it helps the parietal lobe and frontal lobe better communicate (likely thanks to the amino acid theanine). So better start brewing.

LICENSE TO EAT?: A 12-year study found that people on statins to control their cholesterol gradually increased their consumption of calories and fat over that period. It seems users feel free to indulge knowing it won’t impact their cholesterol levels. It does, however, impact your weight.

THE POWER OF CRICKET FLOUR

This is something that kind of just jumped out as us. Cricket flour. It turns out that the lowly cricket has twice the protein of beef, more iron than spinach, all essential amino acids and more calcium than milk. And, of course, it’s delicious. But if the thought of lying in wait in your front yard for a little snack seems disconcerting, several companies are bringing us insect goodness in the forms of flour and energy bars. Bitty Foods roasts and mills crickets into baking flour, which you can purchase online. It’s perfect for protein-rich cookies, pancakes, muffins and whatever else people make with flour. (We don’t know where the kitchen is.) bittyfoods.com

It’s well documented that fiber helps reduce the risk of cardiovascular disease. But a recent study published in BMJ says that it also helps decrease that risk after you’ve had a cardiac event. It seems that patients who upped their fiber intake the most after their first heart attack had a 31 percent lower risk of dying from any cause and a 35 percent lower risk of cardiovascular death than those who upped it the least. The study linked only cereal fiber to the lower risk, not fiber from fruits or vegetables, so load up on the Shredded Wheat.