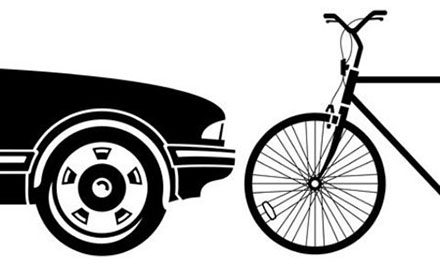 We had a little bit of a shock here at Gulfshore Life yesterday when we learned that one of our photography contributors, Erik Kellar, had been struck by a car while riding his bicycle. Thankfully, the situation chronicled here and here, was far less serious than it could have been. (As Kellar said on his Facebook page later in the day, he’ll be back on his bike before we know it.)

But the accident led me to have several conversations about road safety as it pertains to cars and bikes living in harmony. I own a bike, but the only two places I feel safe riding it are on sidewalks (which then causes issues for pedestrians) or in the few areas (Gordon Drive, through the Vineyards) where the bike lanes are exceptionally wide. You couldn’t pay me enough to ride it down Livingston, which is where Kellar was riding when he got hit after stopping to help another cyclist.

I’m a casual biker, but Kellar is hardcore. He’s the kind of guy who will shave his legs to get a few more seconds per mile faster. And for those guys, riding on the road is part of the game.

There are rules: Cars need to keep at least three feet of distance between them and cyclists before passing. Bikers can only ride in rows of two across. Bikers need to avoid erratic behavior and use hand signals. Cars need to respect the right of way rules just as if the biker was in any other vehicle.

More to the point, both sides need to respect each other. Yes, it’s frustrating to be going somewhere in your car and get stuck behind a pack of riders going, at best, half your desired speed. But the speed your vehicle can travel doesn’t give you any special privileges. And bikers, don’t think we don’t notice you not stopping at lights because you don’t want to lose speed.  Don’t think we don’t see you riding three or four across in some places.

Also, don’t think that just because we are in a car, we aren’t terrified of hitting you. We are. You are making a conscious choice to do something that is a little bit dangerous, even if everyone is following all the rules.

No one has special rights to the road. Not bikers. Not drivers. We are all in this together.