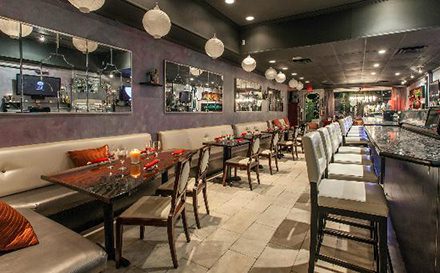 If you were in downtown Naples this weekend, you probably noticed a big sign on the door of Osetra—the upscale caviar and champagne bar nestled between Avenue Wine Café and Café Luna in along Fifth Avenue South. It notified patrons that the bar was under new ownership and would be reopening soon.

This change at Osetra is likely to be the first of many that happen along this stretch of Fifth Avenue South between Fifth and Fourth streets. With older building stock, and the renewed real estate boom, the possibilities for the land on which those buildings rest is much greater than their current uses.

Phil McCabe owns the building that houses Avenue, Osetra and Bella Maria Café, among others. It’s pretty well known among the owners of those businesses and folks who follow downtown construction that he plans to raze the building and put up something bigger and more profitable. The businesses are getting a slight reprieve as it seems McCabe will move first to develop land behind his current hotel property along Fourth Avenue South. (This spot has been rumored to be the home of the reconstructed McCabe’s Irish Pub.)

But once McCabe starts rebuilding his part of the block, other building owners on that part of the street are going to have to keep up if they want to compete. That’s probably why the folks at Café Luna were quick to grab an open space from McCabe on the East Trail for a second outpost of their popular restaurant. If you own a business along that stretch of Naples’ main drag and you don’t own the building, you need to be prepared for big changes.