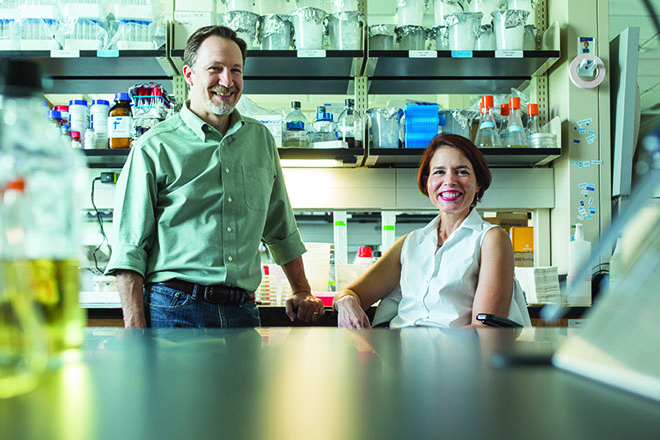 We don’t mean to sound like alarmists, but there’s something you should know about this place we call paradise, something kind of icky. Dengue fever is coming back. In fact, it may already be here. And unfortunately, it’s not the only mosquito-borne virus Floridians need to be concerned about.

Since 2004, husband-and-wife FGCU professors Sharon Isern and Scott Michael have been studying mosquito-borne diseases in Southwest Florida and around the globe. In the past few years, the two virologists have really focused in on dengue fever, which, according to the CDC, one-third of the world’s population is at risk for developing. Currently there is neither a vaccine nor a treatment for dengue. But Michael and Isern are hoping to change that.

“Dengue hasn’t been in Florida for the past 75 years,” Michael says. “We got rid of it in the early 20th century. It was one of the things that kept Florida from being developed for so long—along with malaria and yellow fever. Now these things are coming back.”

Michael and Isern say dengue is on the rise in the Sunshine State for a few reasons. First, the mosquitoes that carry dengue, the Aedes aegypti and the Aedes albopictus, have become endemic (essentially native) in Florida. Second, increased air travel to dengue-infected areas is providing more opportunities for the disease to hitchhike back on unsuspecting tourists. If an Aedes aegypti mosquito (which tends to hang out in urban areas, not in the swamp) bites an infected person and then another non-infected person, the disease spreads. Finally, climate change is projected to turn Florida into a paradise for disease-carrying mosquitoes.

“If it’s warm and it’s rainy and it doesn’t get as cold over the winter, the mosquito vector is going to do better,” Isern says.

But they’re here to help. Michael—who originally started as an HIV researcher—and Isern are devoting vast amounts of their research time to working on mosquito-borne diseases, especially dengue. They’re working closely with mosquito control districts around the state to test and track outbreaks. And, perhaps most importantly, they’re raising a new generation of curious researchers through their teaching work at FGCU.

Love in the Time of Dengue

The two scientists met when Isern was a senior and Michael was a third-year graduate student at Johns Hopkins University. It’s tempting to say they caught the love bug or that their love was infectious, or any of other virology-related puns. However, the thing that stands out the most about Isern and Michael’s relationship is the mutual respect and genuine admiration the two seem to have for each other. Each truly values the other’s thoughts and ideas—something that’s crucial when you work side by side in a lab.

Both have their own strengths, too—something that the other partner is happy to point out. Michael can hardly contain his pride as he brags that Isern was the mastermind behind securing a $1.7 million grant from the National Institutes of Health. “She’s excellent at getting funding,” he says, without even a hint of jealousy or competition. The grant is the first of its kind for the school and will allow the couple to conduct research and tests on the vaccine for the next several years.

Working in FGCU’s biology department has been a wonderful fit for the two researchers, mainly because they’ve been able to work together. Traditionally, dual-career academic couples struggle to find jobs at the same universities. For years, Isern and Michael were no exception. Prior to joining FGCU, it felt like one spouse was always making some sort of job concession whenever the other found a dream gig. Now, however, they’re both able to pursue the work they love.

While it’s obvious Isern and Michael have a warm and supportive marriage, don’t assume they’re facsimiles of one another. Isern is tan and athletic, looking every part the runner she is. Michael’s been getting into running, too, but mostly because Isern’s into it. Isern is slightly less reserved than Michael, although he’s more likely to jump in on the conversation with a zingy one-liner. Both are completely enamored (like any parent) with their 15-year-old son.

The pair say they try not to let work creep into their home life, but it’s kind of inevitable. Someone will have a breakthrough while washing dishes or fixing dinner and they can’t help but discuss it. And their son is totally used to being surrounded by super-nerds—in fact, the pair often bring him along to conferences.

“Not all the conferences are really family-friendly,” Isern says, adding that he’s sat in on workshops on all manner of terrifying illnesses. “But most of these are on university campuses, so he’s gotten a good feel for dorm life,” she adds.

Unlike many research universities, FGCU places a strong emphasis on teaching, and both Michael and Isern teach several classes a semester. It’s something both have come to enjoy. While FGCU doesn’t have a virology major, Isern has introduced a virus discovery course that’s become very popular. Early on in the course, Isern asks her students to go out and find a virus within a soil sample. Each student brings back a different virus and the class votes on which they want to study for the semester. There’s no textbook for the class, just the virus and the process of figuring out what it is and how it works.

“They want me to know the answers with the virus, but I don’t. We have to study it; that’s how life works,” Isern says. “I’m able to fit a lot of my research in with my teaching, and that’s gratifying.”

However, what the two clearly love most is creating solutions that make people’s lives better. Michael refers to dengue as a “poor brown person’s disease,” meaning it mostly affects people who couldn’t pay for the vaccine even if there was one available. While this work maybe isn’t as lucrative as developing the next little blue pill, it’s certainly important.

The Trouble with Dengue

Travelers and researchers refer to dengue fever as the disease that probably won’t kill you but will make you wish you were dead. Generally, dengue presents with flu-like symptoms accompanied by terrible body aches and a high fever. Most people with healthy immune systems will, miserably, soldier through a dengue episode.

But if you’ve already had dengue once, things get dicier.

“You get enhanced disease, so you get worse symptoms. You can get dengue hemorrhagic fever, shock syndrome or death, so it actually amplifies the severity as opposed to giving you protection,” Isern says. “The antibodies from the old one that you had cross-react with the new one, but they don’t neutralize them,” Michael adds. “It helps it get into other cells, immune system cells and cells that wouldn’t otherwise be affected.”

This is why making a vaccine for dengue fever is so hard. If you gave someone protection to dengue 1, it could be harmful if they contracted dengue 2, 3 or 4.

“There have been a number of high-profile dengue vaccine trials going on, and they’re failing because of this issue,” Michael says.

Isern adds: “They’re failing because they protect against three (strains), but the response seems to wane against the fourth type—so there’s that potential; what if that’s the unlucky one the person gets?”

“But we have a way around that,” Michael says.

Michael and Isern are solving the multiple-strain problem not by trying to inject people with every strain, but instead by looking at what antibodies the body naturally produces to fight a dengue infection. These antibodies appear to be the ticket to blocking the dengue virus from entering human cells.

“We found panels of antibodies that behaved in a particular way and targeted a particular area of the virus,” Isern says, adding, “and we found out where on the virus they were binding, which was important. We were sort of figuring out where is the virus most vulnerable.”

There’s still some more testing to do, and after that there will be animal trials to conduct. The process of getting a vaccine approved and onto the market is arduous and slow, but still, Isern and Michael are excited—and so, too, are Florida health workers.

Florida, Dengue and You

There have been two outbreaks of dengue in Florida recently.

“Usually,” Isern says, “the way it works is that an infected person comes here after a trip somewhere else and a mosquito bites that person, then it bites another person and transmits the disease. Mosquitoes are also known to transmit it vertically, to their eggs, so even if the mosquitoes go away in the dry season, when the eggs hatch back out in the rainy season the virus might be around.”

Both counties had dengue 1, which made everyone nervous that perhaps these two outbreaks were related. Such a finding would make it hard to deny that dengue wasn’t well on its way to becoming endemic.

“Monroe County Mosquito Control sent us samples of the mosquitoes and we ground them up to look at the genome; it’s the only way to know where the virus came from,” Isern says.

“People thought it would be from the Caribbean, because it’s so close, but it was actually from Central America,” Michael adds. “From a sleepy surfing village on the Pacific coast of Nicaragua.”

When dengue showed up in Martin County, Michael and Isern asked the mosquito control officials there for samples. “Unfortunately, they were so busy dealing with the outbreak they couldn’t get them to us,” Isern says, “but there was a physician there that we work closely with who sent up a human blood sample.”

The researchers tested the sample, worrying that the virus would be from the same Nicaraguan surfing town. Instead, it came back as being from the Caribbean. Everyone in both mosquito control and health care breathed a sigh of relief. The two outbreaks were unrelated—but that likely won’t always be the case.

The real danger, Michael says, is that we’ll get a major outbreak of dengue 1, and after a year or two everyone will have immunity to that strain, so we’ll forget about it. Then, when a traveler returns to Florida carrying dengue 2, 3 or 4, things will get really bad.

Michael and Isern hope it doesn’t come to this—or that by the time this scenario happens their vaccine is approved and ready for public use. Local health officials do, too. Having a safe and effective dengue vaccine in place could be just the literal shot-in-the-arm that Florida and many places around the globe will need to fight this very pervasive disease.