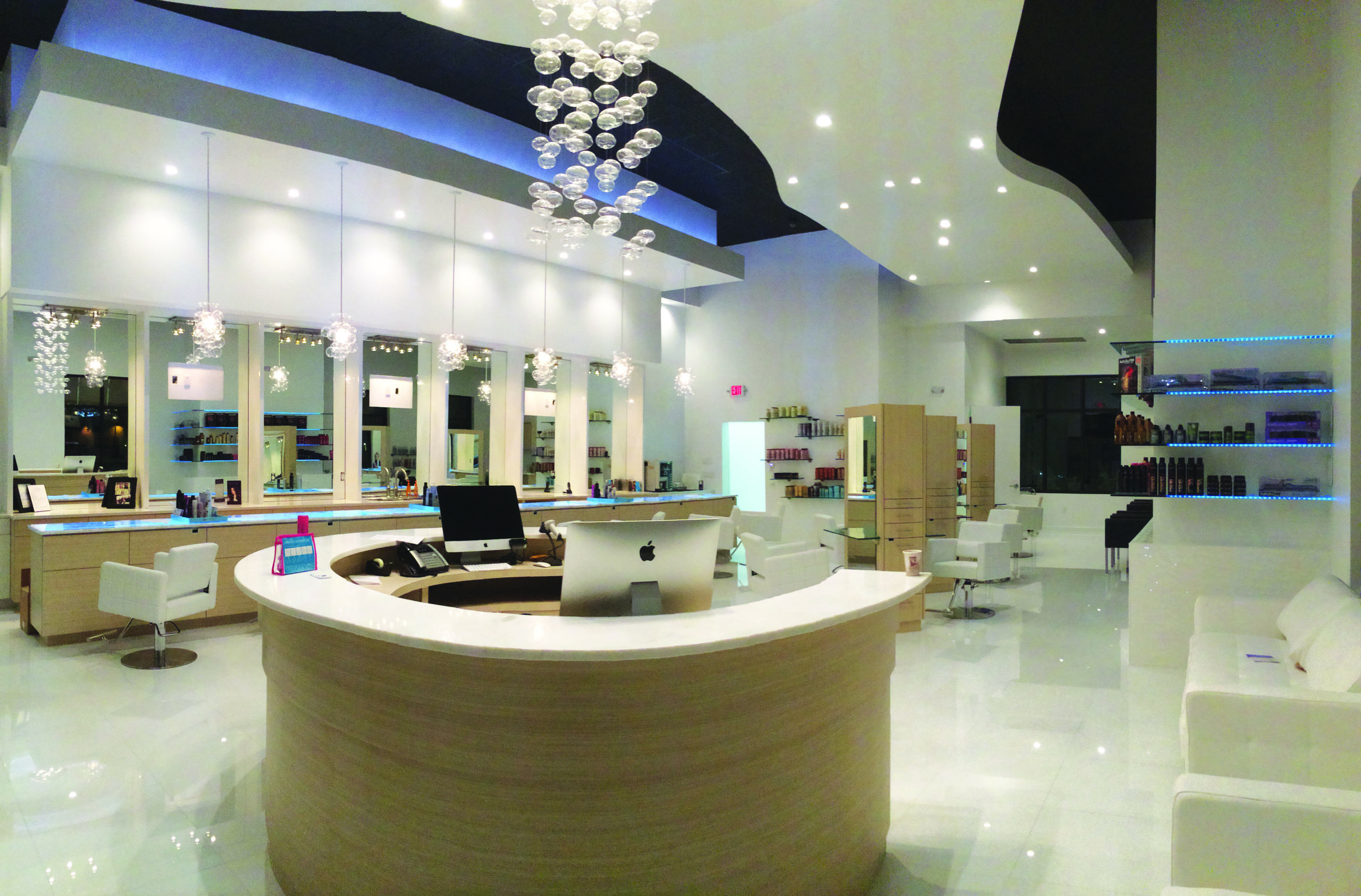 If you are like us and suffer from Post Haircut Non-Recreation, that is to say your hair never looks like it did at the salon, you might consider partaking in a new trend sweeping the nation: the blowout bar. You just walk in, often without an appointment, and a stylist gives you a glass of wine or some other beverage and a quick blow dry and fluff and sends you on your way, looking glamorous and fabulous. And finally Naples has one of its own. The Air Bar, located at 8050 Trail Blvd. N. in North Naples, specializes in blowouts, extensions and keratin treatments. Heather Jackoboice and her husband, Timothy, partnered with stylist Kitrina Madaffer to create a luxurious setting where all of Southwest Florida can come to re-fluff and reenergize without feeling as if we’re cheating on our main stylists. myairbar.com

JUST WAVE The results are in: Handshakes are dangerous. British researchers tested the amount of bacteria spread via traditional handshakes versus other forms of personal greetings: fist bumps and high fives. The handshakes consistently caused the most transfer, with fist bumps causing the least. Is winking unprofessional?

WORK OUT ON A BODY BOARD

We’re dumbfounded that people can still come up with new ways to work out. And some of them are so simple you want to kick yourself for not thinking of it sooner. Case in point: the DaVinci Body Board. Imagine lying on a board. Now imagine standing on a board. Now imagine both of those things but with resistance bands! There’s more to it, certainly, but working out on the DaVinci Body Board is 20 minutes you won’t soon forget because you’re dealing with resistance bands from each of the board’s four corners. It’s a fascinating routine that works muscle groups that were heretofore unknown. It’s a little Pilates, a little yoga and a whole lotta burn. You can buy the boards online starting at $298, but if you’d prefer to work out with company, R3 Body Method at 843 Myrtle Terrace in Naples offers a range of classes featuring the board. r3bodymethod.com, davincibodyboard.com

ADDING FUN TO YOUR EXERCISE

Do you find your time at the fitness center to be mind-numbingly dull? Is the elliptical machine the bane of your existence? Well, the co-founder of Guitar Hero has created a gaming app that features game controllers and a tracker that clips to your person and puts you into various games in an effort to distract you from the awful truth that you’re working out. The Goji Play attaches to the handgrips of whatever treadmill, stationary bike or elliptical machine you’re using at the gym (or at home). It links to your iPad, iPhone or iPod via Bluetooth and puts you into a competitive game such as Riptide GT, a personal watercraft racing game, or Into the Dead, which encourages you to sprint away from zombies. (That probably would make you run faster.) You can compete against others and Goji tracks your progress. $99.99. bluegoji.com

COMPETITIVE STREAKING Minimalism is always the best option. It seems that the American Association for Nude Recreation has proposed that a circuit of nude 5K races be started in Florida (joining such series in Texas and Oklahoma). Florida already has the Caliente Bare Dare 5K held in Land O’Lakes in May. This year’s race attracted 312 runners from 25 states.

If Peyton Manning loves something, we’re in. Local trainer Jay Weitzner is the only certified specialist in Muscle Activation Techniques (MAT) in Southwest Florida. “When our bodies are unable to tolerate stresses or forces, muscles disengage, or shut off,” Weitzner says. “What follows are all the symptoms everyone experiences—from tight muscles to pulled and strained muscles to chronic joint pain and range of motion limitations. When these symptoms are addressed, instead of the cause of the symptoms, more symptoms arise. … MAT is so amazing because it never misleads the specialist by chasing the symptoms. Rather, it systematically finds and fixes the causes of people’s physical problems.” Manning was quoted in Sports Illustrated as crediting MAT with resurrecting his career and helping him perform at the highest level. Weitzner has a master’s degree in exercise physiology and helps clients who range from professional athletes to post-surgery patients looking to regain pain-free range of motion. nofadsallfitness.com

NOW YOU CAN FLOAT ANYWHERE

If you’ve ever had the opportunity to spend some time in an isolation tank, you know that it’s just about the best thing you can do in a dark, liquid- filled container. You’re just floating weightless, in pitch-black solitude. The problem tends to be that isolation tanks are inconvenient: They take up  a large space, require hundreds of pounds of Epsom salts and cost many thousands of dollars. But Float is a new product from Iceland that gives you the same floating sensation but in a tidy travel package, allowing you to use it anywhere knee-deep water can be found: the beach, your swimming pool, the koi pond at Miromar Outlets, etc. Made of neoprene, Lycra and polyethylene foam, the cap and leg supports can be bought individually ($85 and $55, respectively) or as a set for $135. It’s a phenomenal stress reliever and an affordable option for all those times you wish the world would go away. floatis.bigcartel.com

GLUTEN-FREE MAY NOT BE ENOUGH

Have you gone gluten-free? A lot of people have. Unfortunately, it might not be doing anything for you. Researchers who were at the forefront of gluten analysis have taken a more precise look at the data and performed another study that suggests that people who do not have celiac disease but are otherwise suffering similar symptoms might be suffering from a sensitivity to FODMAPs, a class of carbohydrates found in a variety of foods including, but not limited to, the usual gluten suspects. We’re talking about everything from broccoli and legumes to avocados and apples. So if you’ve gone gluten-free but still aren’t up to snuff, you might want to look into a FODMAP diet.

FIND SOME STRING  If there is one activity that could be considered an elixir for what ails you, it might be the act of flossing. The bacteria that cause gum disease are linked to inflammation throughout the body, which leads to heart disease and cancer. The book The RealAge Makeover suggests regular flossing could add 6.4 years to your life.