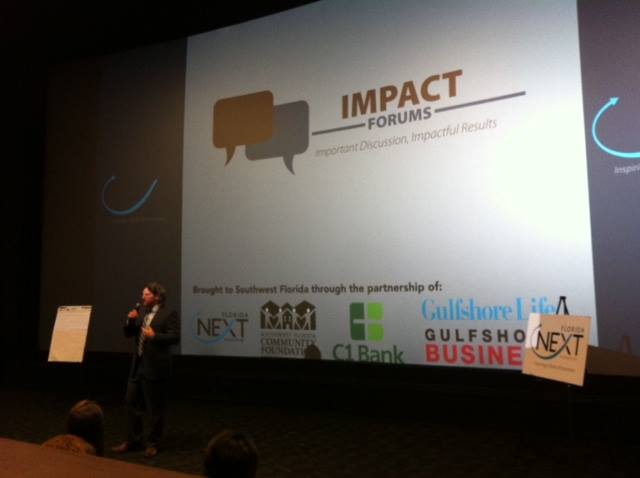 This was show time at Naples’ Silverspot Cinema one night last week … only it was live, not on film. The place was abuzz with ideas and there was serious purpose in the air. It was a young crowd and they were lured there (by Florida Next and the Community Foundation of Southwest Florida) with the prospect of getting funding for socially focused business proposals. (Gulfshore Life, Gulfshore Business and C1 Bank were also sponsors.)
Seventeen people had signed up to make their pitches—you get all of 90 seconds do so—and engaging host Ned Pope announced that everyone present in the theater could then vote for their three favorites. The trio of winners would receive the funding assistance. And, he said, if any people in the audience were inspired to make pitches—even if they hadn’t signed up—they, too, would get their 90 seconds to bid for support.
Well, darned if this wasn’t one creative evening. As the moving spirit behind Florida Next, former gubernatorial candidate Alex Sink, looked on, out poured the ideas. There were proposals to provide transportation for students to advanced classes at local universities, to build an urban garden to serve the community, to encourage free-ance people from all over the country to settle in Southwest Florida.
And as dramatic testimony to the spontaneity of ideas in play, the top vote-getter was Kinfay Moroti, who was there to photograph the proceedings. But after taking in all the ideas for bettering the community, he couldn’t resist the chance to say what was on his mind and in his heart. He proposed getting funding for businesses to bring youngsters from low-income areas to their offices, so these less-privileged kids could learn about a world and opportunities that could make a difference in their lives. When I celebrated him for his appealing eloquence since he hadn’t intended to speak at all, he replied, “Maybe I hadn’t planned it, but I’ve been thinking of this idea for a very long time.”
The other winners were Matt Johnson, who suggested a FabLab at the Imaginarium in Fort Myers for entrepreneurs, inventors and students to use the latest in computer-controlled machines to generate business ideas (“I loved all the people who came up afterward wanting to get involved,” he told me), and Angela Melvin, who wants to establish Valerie’s House, a place to support youngsters grieving from the loss of a parent or sibling. “I was one of those kids many years ago,” she said after her moving presentation.
Alex Sink seemed all smiles at the end of the evening, taking in the energy in the place, the sight of younger generation Floridians engaged and incentivized to bring better days for many in the community. She was not alone.