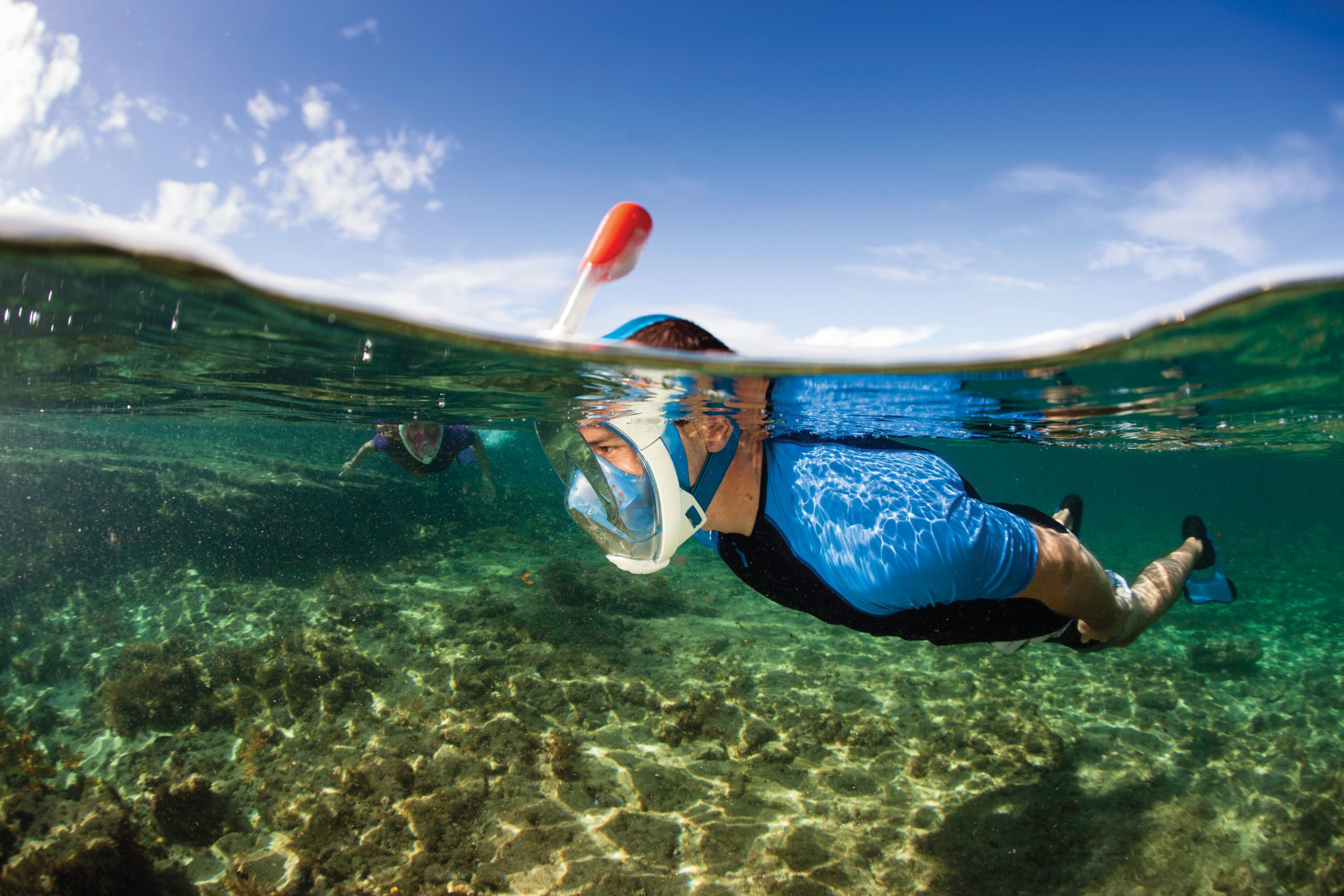 Now that season is upon us, many of us would like to make our way back to the open water and take advantage of this beautiful weather. And snorkeling is one of the coolest things to do in Southwest Florida. But if you’re new to the sport, it takes some serious getting used to breathing through your mouth and not fogging up the goggles. The  new Easybreath Surface Mask from Tribord solves those problems by fitting your entire face inside the mask, which is fitted with a very stylish breathing tube coming over the top of your head. They come in different sizes and colors and will let you start exploring the beauty under the waves in no time. (They retail for just $55 but currently must be shipped from Europe.) C’est la vie. tribord.com

CALORIE COUNTER: Ever wonder how many calories you burn doing various activities? Choosemyplate.gov has a list that’s pretty interesting. Did you know if you stretched for an hour you’d burn 180 calories? (You’d also be able to fold yourself into a dresser drawer.)

CYCLING SHORTS AND JERSEYS THAT PROTECT YOU

If you’ve ever spent time on a bicycle, chances are good you’ve spent time lying on the ground next to your bicycle. It happens: you’re a little aggressive on the brakes, an armadillo runs in front of you, a man in a Bentley is texting his girlfriend. The next thing you know you’re lying on the pavement fondly recalling the skin that used to be on your knees and elbows. But Scott Sports has just released cycling shorts and jerseys that make use of a new type of fabric made from carbon fiber and ceramic panels. The line is called RC ProTec. In lab tests, the fabric saw virtually no damage after being held against a power sander for more than a minute. The icing on the cake? Not only will the clothes last longer, the carbon has a natural antibacterial property, meaning you won’t smell bad after a day of sliding across the roadway. scott-sports.com

SKIP DINNER: Studies now suggest that intermittent fasting—skipping a meal or two on certain days of the week—may have the same benefits as a calorie-restricted diet. Of course, who needs breakfast when you get up at noon?

We’re about to bring the mood down—way down. Six feet under down. However, this can  also be thought of as a happy ending—especially if you or someone you love is environmentally friendly. Bio Urns are quickly becoming the latest craze in mortuary accoutrements (for the deceased who has everything). The funeral urn is made from biodegradable materials and includes, get this, a seed (your choice) so that in the semi-near future you become a tree—perhaps a nice oak that the kids can climb. A great way to remember Uncle Earl, but a wonderful gesture, too, for people who, in life, had trouble setting roots. Also, the Bio Urn can be stored on the mantle for years without a decrease in functionality. urnabios.com

We didn’t see this one coming.  Some plastic surgeons are now offering saline injections that simulate breast enhancement surgery. Patients debating whether they want to go under the knife, or who are unsure about what the newbies (or Cs or Ds) will look and feel like, are asking surgeons to inject them with saline solution. According to the American Society for Aesthetic Plastic Surgery, 313,327 breast augmentations and 137,233 breast lifts were performed in 2013, so obviously there’s a lot of curiosity out there. It lasts for only 24 hours before the saline is absorbed into the body naturally, so plan accordingly. (A romantic dinner should probably start with dessert.) You might want to warn new friends that things are temporary. After all, false fronts can be such a letdown.

HELP ON THE WAY TO FIGHT PEANUT ALLERGY?

Researchers from the University of Chicago recently found that changing the bacteria residing in the guts of mice effectively relieved their allergies to peanuts. Reduced bacteria in the gut can happen for a variety of reasons, from a diet full of fatty, over-processed foods to the use (and overuse) of antibiotics. So when the researchers added the proper mix of bacteria to the mice, the new bacteria seemed to protect the mice from their peanut sensitivity. The bacteria works by blocking the peanut allergens from entering the blood—so the immune system is completely unfazed by the introduction of the nuts. While they’re not ready to say they’ve found the magic bullet to allergens, researchers suggest avoiding excessive antibiotic use, eating more plant-based foods, upping your fiber intake and adding more fermented foods to your diet. Looks like the right time to consider a probiotic.

POWER OF THE RIGHT DARK CHOCOLATE

Scientists have finally heard our prayers and agreed that chocolate is good for us. Well, dark chocolate, anyway. An Australian study found it might even protect us from heart attack and stroke. However, not all dark chocolate is good for us. So here’s the skinny on what to look for. You want a chocolate that lists “cocoa solids” first, not sugar. That means you’ll likely be in the 70 percent cocoa solids. And you want to avoid chocolates that have added milk fat or hydrogenated vegetable oils, which are saturated fats. Doctors say that if you keep that chocolate consumption under 100 calories a day, you can actually feel good about this guilty pleasure.