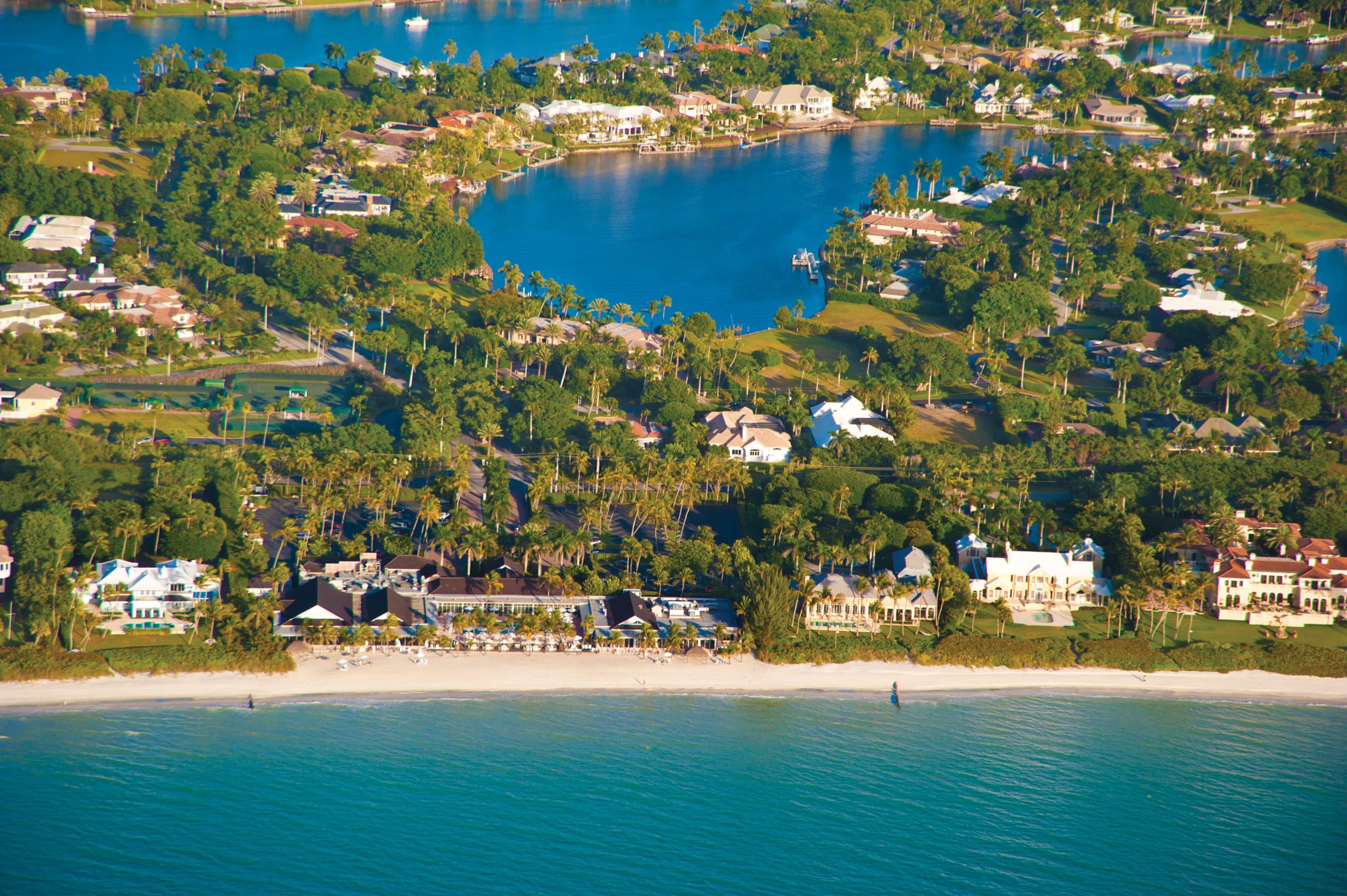 On an overcast Tuesday morning in January, a family of tourists walks down the middle of Gordon Drive. Likely pushed to the street by a rising tide, they’re gawking and chatting about the world-class wealth in the opulent estates around them.

Disney’s castle never had it so good.

This is where we live. Port Royal and the rest of the beach corridor south of downtown is a place where it seems Disney’s fantasy palace has come alive, and, for some, the princess life is in full swing. (At least, recent news reports of reality television shows being filmed in the area might have you believe that.)

Some local residents call this the sensational part of the story. Instead, they see Port Royal as a neighborhood filled with hardworking souls who have built mega companies—and a lot of wealth—who generously spread their good fortune throughout Southwest Florida and beyond.

“Nobody really understands that this is one of the wealthiest places in the world, bar none,” says local real estate agent and attorney Thomas Campbell, who lived in Port Royal for 34 years.

Forget what you’ve heard through the years: myths that maybe Stephen Spielberg or Tom Cruise has a home here. (We can’t confirm either of these urban tales, although some property transactions include trusts that camouflage the identity of the homeowners.)

Dig deep, though, and the success stories of many who live here are frequently more fascinating than Walt Disney could have ever imagined.

Most residents in the Port Royal area fly under the radar. “Naples is one of the premier garden spots in the United States, and it’s targeted by the captains of industry,” says real estate agent and Port Royal resident Bill Earls. “They try to stay very low-key. They value their privacy.”

Before we talk about the captains of industry, though, here’s a lesson in Port Royal 101.

Residents of the historically quaint Port Royal area may have water access, but the majority of houses are east of Gordon Drive. (Slightly more than a dozen are on Gordon Drive and have immediate beach access.) This is the part of town where Chicago and New York advertising icon John Glen Sample—who developed the first radio soap opera—built the neighborhood, starting in the 1950s.

“He wasn’t just trying to sell land. He leaned toward captains of industry,” said Sample’s son, Joe. “My father was the admissions committee. He simply took people he liked.”

“It’s old-world shabby chic,” Earls explains. “You walk in and you can almost smell the mustiness.”

However, even homeowners just down Gordon Drive don’t have admittance to the club—only deeded property in Port Royal allows you in. Still, beachfront property is scarce and these estates, too, continue to gain value rapidly.

For more than three decades, Campbell lived on Cutlass Cove—which was the first phase of Port Royal—watching Naples grow from a quaint, one-stoplight town to a cultural mecca that attracts business magnates from around the world.

“Most people aren’t aware of the rich history here,” he says.

Campbell is referring to the natural history in Southwest Florida, an exotic land inhabited first by Native Americans who left mounds of shells and later by an affluent group of seasonal visitors who appreciated its mangrove forests, organic marshes and all the wild creatures that come with them.

Buried beneath this history, though, is a human story that involves the titans of industry whose lives’ works have given them, and in some cases their offspring, the privilege of living in these sprawling estates. Residents include technology magnates, transportation innovators, health care icons and real estate tycoons. Several rank on Forbes’ list of billionaires.

This is an entrepreneur’s enclave, where regular gatherings among members of the Port Royal Club reveal rich histories of some of America’s best-known companies. There’s Johnsonville sausage king Ralph Stayer and his wife, Shelly, and Abbey Carpet founder Phillip Gutierrez. Then there are the founders of CarMax, Paychex, Arthrex and many less-recognized brands (whose names don’t involve an X). Some of those include Cablevision Industries, Alta Resources Corp., MITO Corp. and more.

Mix these über-successful entrepreneurs with former CEOs of Westinghouse, AT&T, Bank of America and others who have retired to the neighborhood and the result: an undeniable brain trust. “That’s what makes the dialogue at this club so interesting,” says one Port Royal Club insider.

The creative class is represented in this part of town, too. Homeowners include the writer Janet Evanovich and her husband, Peter, who’ve built a fascinating business plan for success as an author. There are also a few high-profile local doctors
and plenty of industrialists.

Don’t think that these residents merely lounge by the pool; many homeowners along these streets still quietly run companies all over the world. And, whether they’re working or retired, when they’re not bicycling, jogging, playing tennis or boating, residents here participate in the community.

In fact, some Port Royal homeowners are extremely philanthropic. Paychex founder Thomas Golisano, for example, has contributed more than $60 million to children’s hospitals in Fort Myers and New York state, among his many other philanthropic endeavors.

Not only do residents here engage in local philanthropy, they also heavily support the Naples tax base. Golisano, alone, paid an annual $106,290 tax bill last November, according to records on the Collier County Property Appraiser’s website. A tax bill of $441,657.30 was paid in December for property at 3100 Gordon Drive, owned by the Randal D. Bellestri Living Trust. (Last fall, Bellestri—a Michigan industrialist—was sentenced to prison after being found guilty of failing to report income derived from a scrap metal business.)

The Port Royal area is, indeed, a pricey place to buy these days. In addition to skyrocketing real estate prices and lofty property tax bills, think homeowners insurance that can amount to $250,000 a year, and maintenance on estates with homes that range to 18,000 square feet and more.

About those recent soaring prices, consider the law of economies. Few waterfront estates are being built in Collier County, compared to the growing number of people—including those in their 40s and 50s—who can afford them. Port Royal and the beach corridor are attractive because of the history they hold, their beachfront and waterfront footage—and the aforementioned opportunity to join a community of other super-achievers.

“People seem to be drawn to the quaintness of Old Naples,” says Sotheby’s real estate agent Philip Collins. “World-class restaurants, shopping … you can’t reproduce the waterfront.” It’s the climate and the culture, he suggests. It’s close proximity to the Everglades.

Back in the 1950s-’70s, Sample established 600 Port Royal properties. In 2014, there were 62 sales in the Port Royal area, Collins says. Those properties totaled $453 million. By early February of this year, 79 homes and vacant lots were listed.

Collins’ grandparents had a home at the tip of what is now Port Royal—property currently owned by John F. Donahue, a Pittsburgh financier and major Republican donor. The local real estate agent recalls his childhood when his parents drove him past the sales office for the new development named “Port Royal.” He has watched, with interest, as one of the country’s wealthiest enclaves took root.

Campbell, too, recalls being a boy in 1953, when his grandfather purchased 400 feet of beach frontage for $35,000, just north of the not-yet-existent Port Royal Club. Later, his grandfather told him that one day land would go for $1,000 a foot of beach frontage. One of Campbell’s recent sales topped off at $151,000 a frontage foot, he says, grinning.

But, as with any homes built 50 years ago, Port Royal seems to be experiencing its own post-recession renovation. At the tip of Nelson’s Walk, alone, this winter there were three new homes going up where older models have come down. Nearby, three other houses were for sale. Gordon Drive and the other streets were also dotted with considerable in-season construction.

Teardowns are aplenty in this part of town, Campbell explains, because valuable waterfront lots call for houses that match their settings. Homeowners want more space and updates. Certainly, area residents have the business savvy to recognize that a good return on investment will require building a home with all the modern accoutrements.

To demonstrate the value of waterfront lots, real estate observers still buzz about the 2013 land grab at 2658 Gordon Drive by Best Buy founder Richard Schulze, who paid $30 million for beach-front footage. A small home on the lot, once the residence of voiceover legend Peter Thomas, was immediately demolished to make space for roomier digs.

Sales of some high-end properties take time. “Some deals take six months from the time we’ve engaged until we’ve really reached a deal,” says Earls, who lists many of the most expensive homes in the neighborhood. “These are world-class properties,” Earls says.

Curiosity seekers, beware, though. “You will be vetted,” Earls says. Before they schedule a showing, real estate agents research interested parties just to be sure they’re qualified to buy.

If someone is interested in a $20 million home, they most likely will have at least 10 times that amount in the bank, Earls explains. Many of their buyers pay cash and many decide to self-insure, given the rising costs of homeowners insurance.

“People who buy these homes are very astute,” Earls says. “If you are a billionaire, you’ve gotten there because you are astute.”