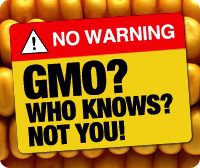 You know your foods are organically grown if they have that now-familiar USDA symbol. But what about genetically modified foods?

Consumers are increasingly concerned about the altering of crops such as soy, sugar beets and corn, but to date there hasn’t been an official government seal verifying that the plants’ genetics haven’t been spliced and diced.

But it appears that’s changing. The U.S. Department of Agriculture recently announced that it has developed a “USDA Process Verified” seal certifying that the ingredients used are non-GMO. It’s the same procedure used to verify labels for hormone- or antibiotic-free livestock and poultry.

The non-GMO certification would be voluntary, and companies would have to pay for the label. This is the first government certification; right now, a private organization, the Non-GMO Project, certifies foods.

There’s a lot of debate about whether genetically modified foods pose any risk. The Center for Science in the Public Interest released a statement about the USDA program, saying “there is no safety reason for consumers to avoid products with ingredients from biotech crops.”

At his new gym in the Naples Design Destrict, personal trainer Kyler Achenbach prioritizes cardio-centric workouts, incorporating TRX and machines.
CONTACT US TERMS OF USE