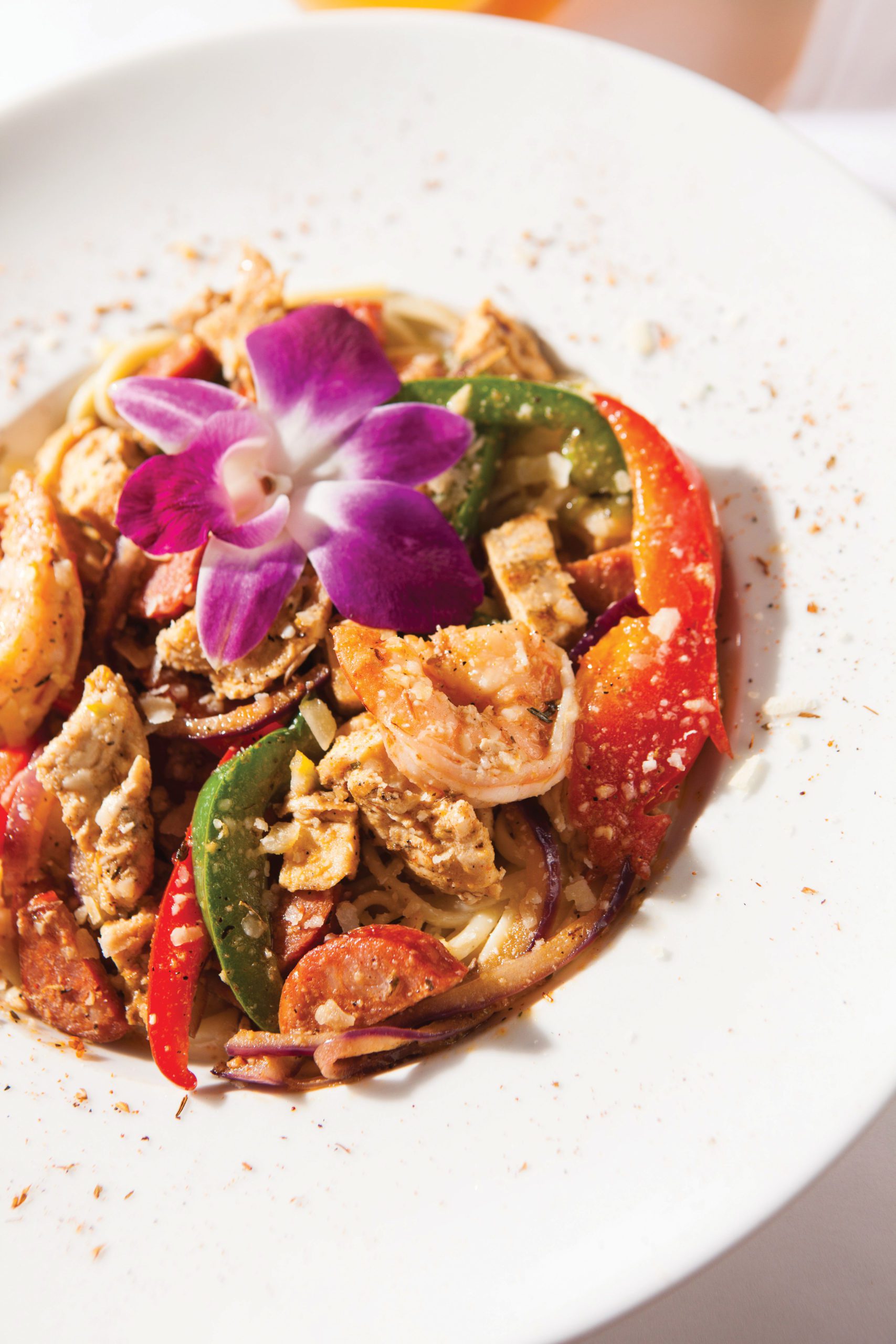 Cape Coral has long been the overlooked stepchild in the Southwest Florida culinary community. Picked on, ignored, often forgotten, the Cape has quietly created its own revolutionary restaurant scene. In the last few years a handful of niche eateries have opened, offering thoughtful menu items in accessible settings. Slate’s, a New Orleans-themed restaurant off Cape Coral Parkway, exactly fits this definition.

Opened in late 2013, Slate’s offers the kind of Big Easy staples you’d expect like gumbo and red beans and rice, as well as more inventive dishes like the coffee-rubbed filet mignon and the New Orleans Alfredo. The restaurant’s atmosphere is upscale-casual with exposed-brick walls, wrought-iron wall hangings and tables set with candles in miniature hurricane lamps. The décor has a scattering of Mardi Gras masks and the obligatory party beads, but the vibe is more Garden District than Bourbon Street. Although the cocktail menu features such New Orleans favorites as the Hurricane, the wine list is comprehensive and international. I chose the featured wine by the glass, a California blend of Syrah and Grenache from the Fess Parker winery ($13). My dining companion opted for the Mardi Gras Bock from the Louisiana-based Abita brewery ($3.75), which has a cult following inside and outside the state.

The drinks paired well with our appetizers, a plate of corn and crab beignets plus a quartet of shrimp skewered with andouille sausage ($14 each). The beignets featured a corn-sweetened interior with generous chunks of lump crab meat, offset by a crisp exterior. The shrimp skewers, pinned in a slice of fresh pineapple, offered serious spice. The accompanying pineapple-onion-cilantro salsa also had a nice bite. The flavors of both dishes featured strong Caribbean influences, a nod to the husband-and-wife chef-owners’ former restaurant in Saint Croix.

For my main course, I ordered the evening’s special—shrimp gnocchi in a tomato Creole sauce ($22)—while my companion selected the New Orleans classic crawfish étouffée ($15).

My friend looked at me then gave an uncertain nod.

Our dishes arrived, each with its own surprises. I thought the gnocchi and Creole sauce might make for an unlikely pairing, but the Cajun seasonings balanced the simple potato dumplings. The shrimp tasted fresh, and the dish offered just the right amount of heat. As I worked through the plate, I noticed my friend slipping out of her sweater.

I leaned across the table and reached for a bite of her étouffée. She wasn’t kidding. The sauce—a blend of fresh tomatoes, onions and green bell peppers—had a sting so strong that even the Abita beer couldn’t cut it. In fairness, though, we had been warned.

By the time I finished my gnocchi and my friend had sweated through her étouffée, we were ready to tackle dessert. I’d been ogling the chalkboard menu all throughout dinner, trying to decide between an all-around pleaser, like crème brûlée, or a more New Orleans-inspired croissant bread pudding. We chose the bread pudding as well as a chocolate-
pecan torte. The bread pudding blended a thick custard with buttery pieces of croissant topped with a rich chocolate sauce. The torte—a heavy confection of chocolate, coconut and pecans—arrived with a scoop of butter pecan ice cream. Each was delicious, though sumptuous; we would have been better off splitting one. Still, if there’s any place for gastronomic extravagance, it’s New Orleans—and, by extension, Slate’s.

One of the oft-repeated complaints about Cape Coral is that it’s too far, too much of a hassle to go over the bridge all the way out there. But Slate’s took no more than 10 minutes from College and Winkler. Similarly, from Naples, the trek to the Cape is comparable to a visit to the River District or any nice restaurant off McGregor. Either way, it’s worth it. Cross the river and you’ll discover all the tastes this overlooked part of Lee County has been hiding.