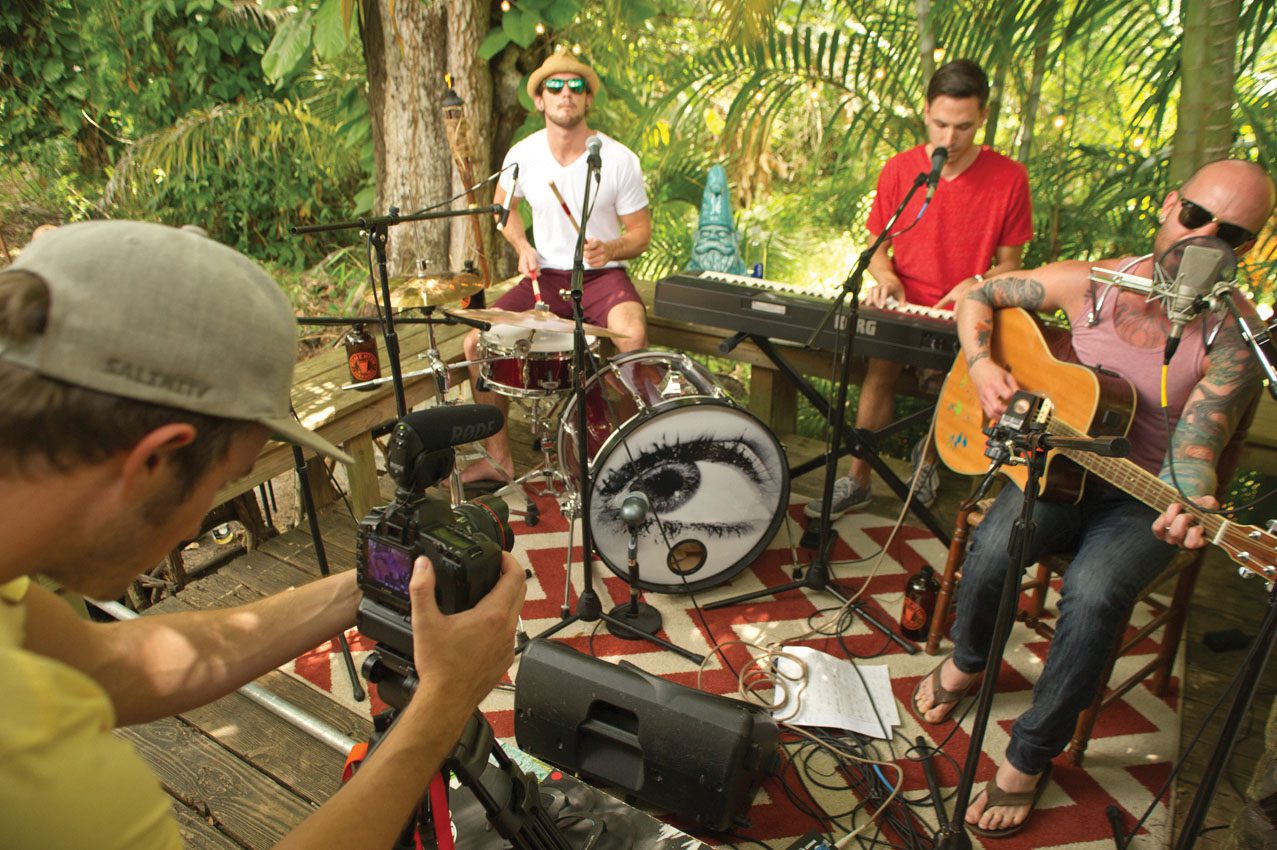 Old Bonita’s got a new vibe!

Yes, I know, I should have given up exclamation marks in about sixth grade. But after a recent afternoon in an Old Bonita “neighborhood in transition,” I felt so exuberant about what was going on that the Punctuation Maturity Squad would just have to look the other way.

I have to credit Nick DiMasi at Revolution Cable Park for telling me about the Sugarshack Sessions. Because he mentioned it, I Googled it and was impressed with the social media savvy of Alex Casement, Arian Antonucci, Eddie Kopp, Justin Kaczmarek and Spencer Paterson, not to mention the videos they were shooting and the live music sessions they were streaming—all from the sweet back porch of a humble cottage framed in wild greenery that leads to a kayak-able waterway, which could take you to the Imperial River.

Or not. I found out when I visited that the acoustic music and the collaboration of talent taking place on dry land is even more beautiful and organic.

This is additive-free performance. Musicians, instruments and audience. Remember that?

As I milled around watching the preparation for a session and single- handedly skewed the average age
up by a decade or more, Eddie Kopp explained that of the five Sugarshack principals, three met while working at Ruth’s Chris Steakhouse, a few graduated from FGCU, and really how they all got together was by mutual interests and networking. But as for the Sugarshack name, they’re not telling.

Their skills cover photography, videography, audio, Web design and graphics, and each has his own, separate business pursuing his skill for income. But for the Sugarshack Sessions, monetary matters are left out of the equation. “People are a lot more relaxed when no money changes hands,” Kopp said.

And that’s the intention. The Sugarshack crew likes to do the techie things they do. Bands should consider this a mini-vacation, they say. If anyone needs any encouragement, local craft breweries act as sponsors and provide beer for the porchside cooler.

Kopp and his girlfriend rent the house and share it with a rabbit named Weezy. Most of the equipment used at the cottage belongs to the Sugarshack crew—which seems to loosely include a core group of friends and girlfriends, two of whom are teachers who can’t imagine doing anything else. Girlfriends and other invited spectators during sessions are the designated clappers and makers of appreciative sounds when a song ends. Between recordings, they speak vegetarian and talk weddings, work and trips out of town. Kevin Bires takes terrific photos. Sessions aren’t open to the public, but the products of them are on the Sessions website and YouTube channel, and there’s always an audience online for the live stream.

Two members of a local band recording that day are teachers as well. Brothers Ian and Madison Sharp both teach high school biology for Collier County schools. Along with Eric Mazurkewitz, they constitute the Americana/folk trio Edith Diamond. The Sharps frequently harmonize, and the sound is exquisite. It’s because they’re brothers, Kopp explained. Nature or nurture, he’s not sure why, but he knows it to be true. He also knows how hard it is to play guitar and harmonica at the same time, the way Ian Sharp does as the band plays two of its original songs—Holding On or The Pacer.

A North Carolina band rolled up in a giant van to play that afternoon, too. Sun Dried Vibes had a gig in Melbourne the night before and dipped down to Bonita Springs for a Sugarshack Session. Reggae saturated the neighborhood, which in the history of the Sessions has not been a problem, apparently. Fairly often they hear a “One more song!” wafting across the scraggy waterway behind the cottage.

Reggae bands are frequently, and of necessity, better networkers, Kopp said. They’re often independent and not attached to a label, so they communicate—and end up on the Sugarshack porch more often than players of other genres.

All of this independent talent seemed at once retro and progressive and so devoid of corporate intrusion that I was thinking in exclamation points again. These savvy artists in their late 20s are their own bosses. They’re carving a greed-free path, while at once being worldly, fresh and innocent.

It took my 19-year-old daughter to point out that the Sun Dried Vibes CD I brought home includes the song All I Want for Christmas: “is a pound of weed.”

With a name like Ariel, it had to happen eventually. The mermaid connection.

Ariel Brown bought her first tail on a lark, then found it suits her. And it brought her another tribe—in addition to the one including her “human,” Justin Kaczmarek, and his collaborators in the Sugarshack Sessions—and also a job on the side.

For the past three years, Brown has appeared at parties, trade shows and other events as the Mermaid Allora. “I’m basically an ornament,” she says. That is, unless you’re between 2 and 5 years old. “They think I’m a real mermaid. Little girls run up and hug me.”

Brown is booked through Blue Mermaid Designs, and she makes anywhere from $75 to $200 an hour. Calls for mermaids don’t exactly flood in—“It’s a novelty act,” she knows—so she has a job on land, too, as a veterinary technician.

But there are meetups with other mermaids and mermen to attend and photos to be taken and added to her portfolio. And it’s pretty fun to zip through the water in a mermaid tail, Brown says.

Walking is out, though. So how does a mermaid get around? “It’s usually not too hard to find someone to carry you when you’re wearing a mermaid tail.”