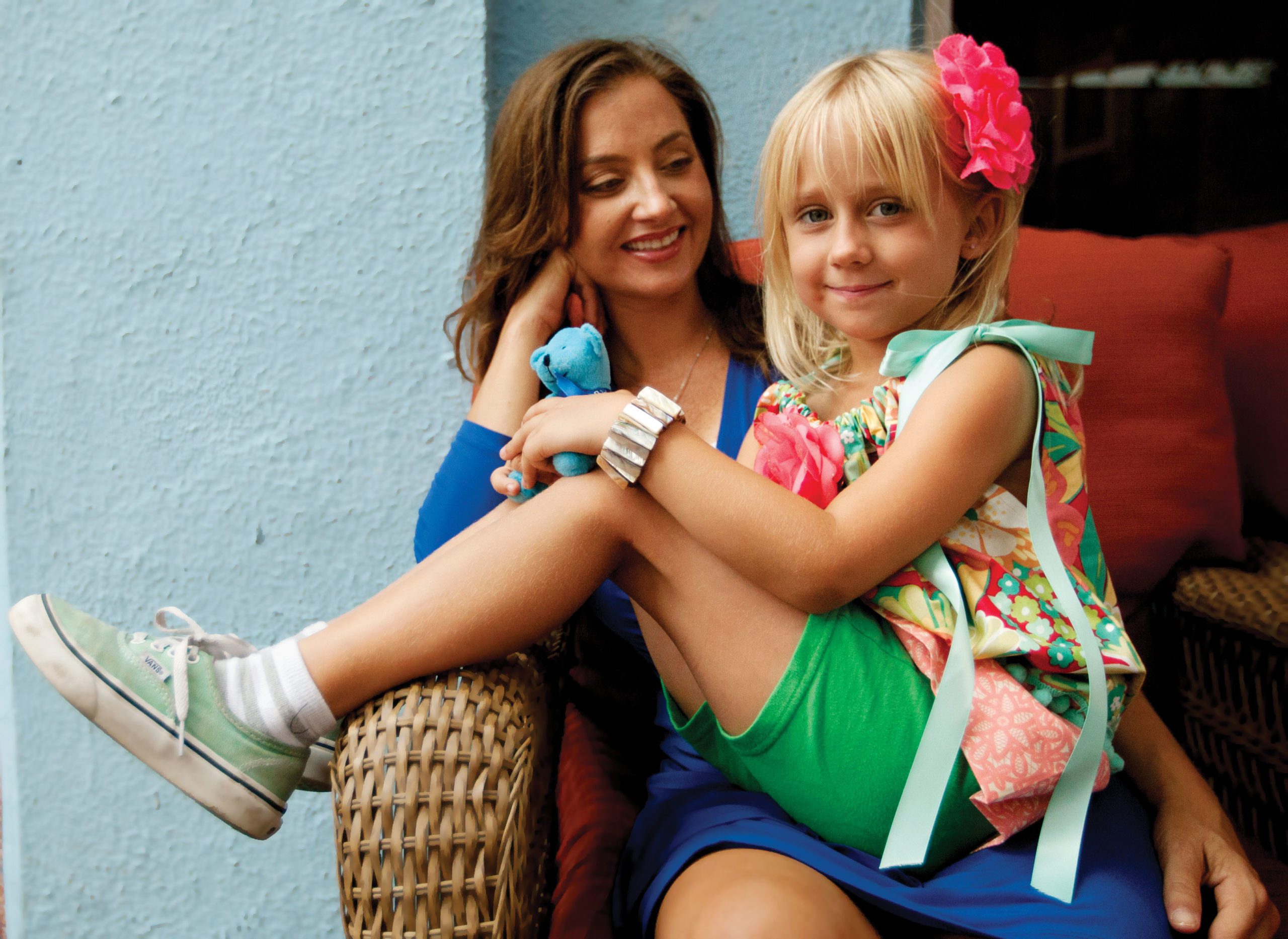 She had not planned to speak that day, but when Angela Melvin arrived at Silverspot Cinema in Naples last fall to observe a nonprofit pitch fest, the mission that had been percolating inside her for years demanded release.

Minutes before the event started, she approached an organizer and asked to be added to the speakers’ list. She was last, No. 24.

Then she took the microphone and started her story.

She was 10 years old, she began, waiting with her little sister at summer camp for their mother to arrive.

She never did. Valerie Melvin was killed in a crash on her way to get her girls.

“Just like that. Gone,” Melvin says, retelling the story to Gulfshore Life later.

Her father, Keith, lovingly held his girls together while grieving the loss of his high school sweetheart. “I do feel blessed my father is the strong man he is, and my sister and I turned out OK.” But there were no counseling or support programs in the area, no other children who could relate to a parent’s death, and few conversations at home where her father strived to create a new normal. “In our family, it was, ‘We’re gonna be strong, we’re gonna move on, and there’s no reason to feel sorry for us, and you’re gonna achieve everything that you would have if your mom had still been here.’”

And she did, graduating from the University of Florida, entering a career as a television reporter, working for a congressman, shifting into nonprofit leadership. Living through loss, she believes, contributed to her drive and gifted her with empathy and compassion that she would use throughout her professional and personal lives.

Through it all, Melvin sought opportunities to help other children who’d lost parents. That’s how she stumbled upon Hearts and Hope, a support program for grieving children located in a cozy house in West Palm Beach. Families gathered over shared meals and then counselors divided children into age groups and led them through therapies masqueraded as artwork, games or sports. Parents, meanwhile, discussed how they could help their children—and each other.

“I remember walking into that house for the first time and crying,” Melvin says. It was exactly what would have helped her process her grief and introduced her to other children who understood what she was going through. A seed was planted—even if the timing wasn’t right to nurture it. Her career was surging; she was about to start a job with Congressman Allen West.

The timing wasn’t exactly ideal at the pitch fest, either. Just a few months previously, she had taken over as executive director of the Uncommon Friends Foundation in Fort Myers, and she had big goals for that organization, which offers character education and business ethics programs and manages the historic Burroughs Home.

But something felt right that evening, as she poured out her story of her mother’s death and her vision for Valerie’s House, modeled after Hearts and Hope and similar research-based programs. It astounded her that in the 25 years since Valerie’s death, no long-term support programs had emerged.

At the conclusion, audience members were asked to select their favorite ideas. The top three vote-getters would receive the support of the Southwest Florida Community Foundation and Florida Next Foundation in setting up a crowd-funding appeal and connecting with potential investors.

Melvin was one of the winners.

“I remember going up to (Community Foundation CEO) Sarah Owen after that. She looked at me and said, ‘Are you ready for this?’”

A child’s grief expresses itself in different ways, explains Andy McNiel, CEO of the National Alliance for Grieving Children. The young ones might play one minute and cry the next; the older ones might hold their sadness inside. Some get angry and act out. Many will feel guilty—as if they somehow caused their parent’s death—or they’ll fear that their surviving parent will die, too.

Children hate to be different, and that’s what Melvin felt so acutely. She recalls the whispers of other children, their inability to grasp what had happened. Teachers didn’t know what to say. Valerie had died the summer before Angela’s sixth-grade year, the start of middle school and a difficult year, for girls especially. “Just to even have known someone—just to have another little girl to talk to about how much we missed our moms would have been really instrumental in my process of healing,” she says.

Melvin’s father remarried “a wonderful woman” who adopted the girls and offered the female role model so acutely missing. Melvin threw herself into her schoolwork, her friends, her goals.

“That’s how you do it as a kid. … Sometimes, I just didn’t even mention my mom had died,” she says.

But in her freshman year at the University of Florida, she roomed with a young woman who spoke to her mother nightly.

“And all of a sudden, it just hit,” Melvin says. “I realized I am different. There is something very different, and I have to face it.”

Facebook chief operating Officer Sheryl Sandberg, whose husband died abruptly last spring, called widowhood “the club no one wants to join.” But the community of grief is just that—a community. And that shared experience can help people heal, Melvin discovered one summer while volunteering at a camp for bereaved children in Tennessee.

Eventually, her career would land her in the path of Camryn Williams, a tow-headed little girl attending the Rainbow Trails Bereavement Camp, an annual weekend offered by Hope Healthcare Services in Fort Myers. Camryn’s mother, Trisha, had died suddenly in 2013 at age 37. Melvin at the time was a Hope volunteer and the director of the local Big Brothers Big Sisters affiliate. She offered to be a “Big” to Camryn, who is now 7.

“She has this obvious need for female companionship in her life. She really thrives on it and is somewhat desperate to have that,” says Williams, who also has a 10-year-old son.

He likes that Camryn is learning that she isn’t the only child to have suffered a tremendous loss.

“It really helps to hear other people’s stories and to see someone like Angela, who is now grown up and able to handle the situation and do well in her life,” Williams says. “They’re learning that there is a light at the end of the tunnel and life isn’t over.”

“One of the most important things I want with our relationship is that she can talk freely about her mother,” Melvin says. “We were at Bell Tower mall a couple of weeks back and we walked by Victoria’s Secret and she said, ‘My mommy loved that store.’ It was a flashback.”

She pauses, and adds, “I don’t think I would have been comfortable even saying that because I didn’t want to hurt my dad.”

Such conversations help children hold on to happy memories, Melvin says. She and Camryn recently made a memory box to store mementos of the child’s mother. They decorated it with the butterflies—Trisha’s favorite.

These are the kinds of things Melvin wants to do at Valerie’s House.

Our culture doesn’t know how to cope with death, says McNiel of the National Alliance for Grieving Children. And pop culture doesn’t help. Every Disney princess, every superhero is a bereaved child. The movies celebrate their grit and suggest that, in the end, the children have moved on.

A loss that deep never goes away, McNiel says. Children’s resiliency is not automatic.

Danielle Visone lost her father to thyroid cancer when she was 10. Unlike the Fort Myers of the 1980s, her West Palm Beach community had lots of support programs, including Hearts and Hope. She remembers her first visit where she was shown a “teddy bear library” and invited to pick out a stuffed friend to accompany her on her grief journey. She still has it.

“The best part, to me, was we were doing activities. It wasn’t just sitting around in a circle and feeling sad,” says Visone, who is now studying social work at Florida Gulf Coast University and helping Melvin establish Valerie’s House. The activities prompted her to talk about her dad in a way that was fun and familiar and helped her to understand her spectrum of emotions.

“I am a big believer in places like this because without that, I don’t think I would have been able to overcome my grief,” she says.

Starting Valerie’s House won’t be easy. Melvin estimates she’ll need some $300,000 a year to rent a home, purchase materials, hire professional counselors and serve about 100 children. But everywhere she goes, it seems, Melvin encounters people who need it—and people who want to help make it a reality.

“I think with Angela, you’ve got the right mix of a sharp professional and a burning passion … and that’s what creates change-makers,” says Owen, the Community Foundation CEO.

A band of volunteers has rallied around Melvin’s cause.

“You can’t replace a parent ever,” says Caryn Smith of Fort Myers, a friend of Melvin’s and a communications professional who helped create the social media and marketing materials for Valerie’s House. “That strikes a chord with me. It’s that significant loss that if not processed correctly can have huge ramifications for your whole life.”

Melvin hopes to raise $85,000 and welcome the first group of children in January. She’s juggling Valerie’s House with her duties as the Uncommon Friends executive—and credits her board of directors for supporting her endeavors.

Melvin’s favorite memories include the one-on-one time her mother spent with her. “She had big dreams for me,” Melvin remembers. They’d talk about all the things the little girl could be when she grew up.

“She would tell me you can do anything,” she says. “That has to be the reason why I’ve always gone after things other people were afraid to do. It has to be that voice from her.”