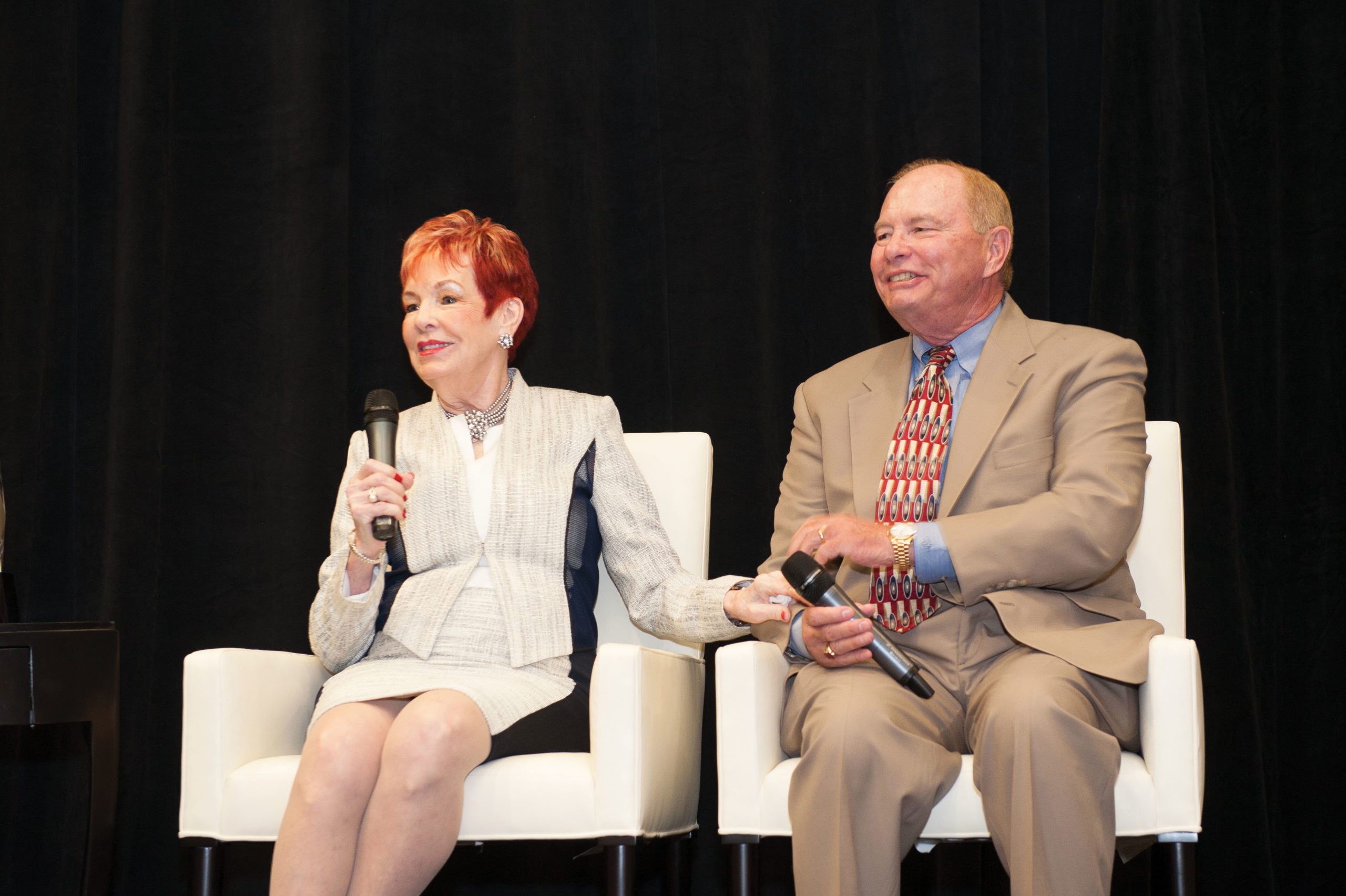 FOR SUCCESS IN MARRIAGE

I was the family CEO, and every morning we had a meeting around the dinner table. My husband and I were equals, but my vote counted 51 percent.

While being honored in April by Gulfshore Business magazine with a Lifetime Achievement Award—along with car dealer Sam Galloway Jr.—Wilma delivered this tongue-in-cheek advice on success in marriage. She spent more than five decades with her beloved husband Bill, who passed away two years ago. Elegant Wilma and crusty, tell-it-like-is Sam had never met before but had great chemistry in their banter on stage. “Those two could take their act on the road,” said one impressed guest at the Hilton Naples Hotel event.

Little did photographer/foodie/physician Ivan Seligman know that romance was in the air back in April when he was snapping off some photos in downtown Naples before dinner at Sea Salt. But suddenly he realized he had captured a young man spontaneously down on one knee proposing to his girlfriend a block away from the Gulf of Mexico. “I’m getting married,” he heard her exclaim, and Ivan shouted “Congratulations” as he rushed off to his dinner appointment. Later, knowing he had an image they would treasure forever, he posted it on Facebook and NBC2 shared the picture on its Facebook page, too. Within an hour, the couple—Lauren Ferrara and Joey Schaefer—and Ivan connected and they met later that day. The bride-to-be was thrilled, and Ivan was so moved by their love story he offered to take pictures at their wedding. Facebook gets a credit for this happy ending—with more romantic images ahead … Rose Rundle, abruptly fired as Harborside Event Center director back in June 2013, is now talking about her high-profile departure after 12 years in the job. Her lawsuit was settled in February, and Rose says she was the victim of reverse discrimination and is happy with the $275,000 settlement from the city … Guests at the Canterbury School Extravaganza on April 25 got the blues in a most joyous way. The event raised more than $200,000 for scholarships and pulled in $65,000 to buy teachers gift cards as a thank you for their exceptional services. But people won’t be forgetting about the signature drink. In a nod to the Canterbury school color, the vodka luge had Blue Curaçao. By the end of the evening, those who had a drink or two also had blue mouths, teeth and tongues. Talk about school spirits … Good things keep happening for Regine Francois, who spoke so eloquently at the Guadalupe Center Gala in January about how the center helped lift her life from the consequences of poverty. She was featured in the May issue of People magazine and has been accepted at 11 colleges, including Brown, Columbia and Cornell. Heading north to school in all likelihood, she says she’s excited but needs to do some shopping. “I’ve never seen a winter coat in Florida,” Regine says. “I’ll have to get one.” …

GEM OF A SURPRISE

What a sweet surprise it was for Cape Coral mom Yaite Palomino when renowned jeweler Mark Loren knocked on her door and presented her with a custom-designed bracelet for Mother’s Day. With her 200-word essay and sketch of a jewelry piece she designed, Yaite’s daughter Ashley had won a “My Mother Rocks” contest for the holiday. “She inspires me to keep my dream going,” said Ashley of her mom, whom she said works late into the night but is always up early to make breakfast for her kids and take them to school.

… There were plenty of tears, laughs and clapping hands as more than 100 people gathered at Broadway Palm Dinner Theatre to honor the passing of Betty Bireley, Fort Myers real estate broker, philanthropist and visionary. Friends told of her love for classical music, her children and vodka. Cliff Smith, United Way president for four local counties, recalled sitting next to Betty at a fundraiser and hearing her first words: “Get this piece of red flesh off my plate” (she was a vegetarian). Cliff told me he had to bust her out of the hospital shortly before she died because she needed a drink and a cigarette. This was a lady who did it her way—and it was all good … Software mogul Arthur Allen, whose ASG company has had its troubles, managed to sell his Port Royal home for $45.6 million, putting it up there with some of the most expensive properties ever sold in Southwest Florida … Congratulations to Gary Mart, owner of Global Tech LED, for winning the Distinguished Entrepreneur of the Year Award in May at a dinner at the Hyatt Coconut Point Resort & Spa. Keynote speaker Michael Wynn, chairman of the Wynn Family Board of Directors and Sunshine Ace Hardware stores, brought extra dimension to the proceedings. He told how the family had come to Naples in 1938, buying an inn and a store near Tin City, then expanding across Collier County and subsequently around the globe. And he related a touching story about the kindness of Gary’s grandmother. She had been deeply affected when she lost her mother to an aneurysm while she was sitting on her lap. Her difficult childhood, Michael believes, gave her special feelings for the suffering of others and informed the way she treated them.

A sampling of money raised for local charities