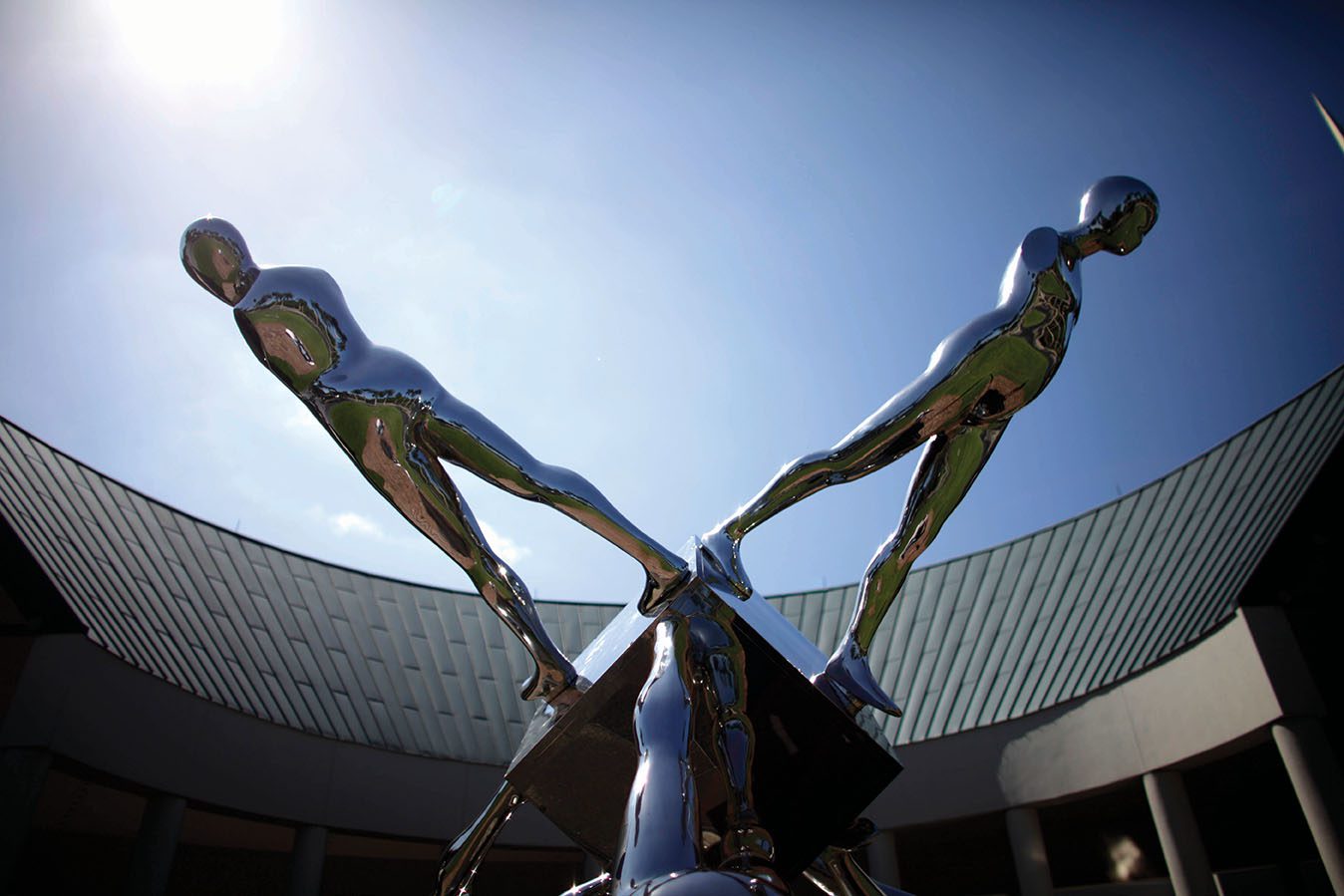 Naples and Fort Myers have more in common than beaches, eateries and shopping. Both cities have fine contemporary sculptures to be enjoyed freely out of doors. Naples has a subsidy program to encourage public art, but Fort Myers’ outside art is ahead of its Collier County counterpart because of a strong nine-year push. All of the works mentioned here can be seen in unguided walks in both cities.

Perhaps Naples’ most progressive sculpture is Cambier’s Quilt, located on a corner of the parking garage at Sixth Avenue South and Eighth Street South, near Cambier Park. Resembling a standing multiple-crossword puzzle, the white grid by sculptor Robert Fuller features squares of bi-coated glass that flash with surrounding colors in natural light.

Also in downtown Naples, at Ninth Street South (Tamiami Trail) and Third Avenue South, is Virtue, an abstract hammered-metal sculpture suggesting upward-curling palm fronds. It is the work of late Naples sculptor Katherine Spalding, known for her bronze birds and animals. Unfortunately, the work, on a concrete base cube, is somewhat obscured by recent plantings nearby.

One of Spalding’s fine realistic elephants sits on the front plaza of the Naples Art Association, Park Street. And there on a nearby wall is her grand heraldic crest of the donating von Liebig family.

At Artis—Naples, on Pelican Bay Boulevard, North Naples, the arts center’s Hayes Hall and Baker Museum are backdrops for several modern outdoor sculptures made in past decades. They include late American artist Ernest Trova’s steel FM/6’ Walking Jackman, 1985, which has brought visual excitement to the front lawn of the Naples art complex for many years. Six humanoid figures join as a giant toy jack. While this gleaming work is an example of pop art, it also suggests Space Age sleekness can lead to human depersonalization. In a way, this happened to Trova: His career dropped after he left a top New York gallery for a hometown one in St. Louis.

In an interview with Trova at his home there in 1970, I learned he had made the armless Falling Man his most dynamic image. He crafted many variations, including Falling Man as a gleaming bronze racing car and having his armless figures’ upper bodies open into Flower Men. Trova said he wanted Falling Man to be as popular as Walt Disney’s Mickey Mouse. After Trova gathered a huge collection of old toys, including his own favorite Mickeys and Minnies, he gave them to his city’s toy museum.

Near the music hall’s front door is Gateway to the Arts, 1987, nine stainless steel arches set inside each other, resembling a geometric fountain. It is the creation of Israeli artist Yaacov Agam, 85, known for his geometric paintings. We were guests together at a party in Pittsburgh.

Impressed by a young matron’s beauty, Agam withdrew a small Japanese brush resembling a fountain pen. He said to the woman, “I want to draw you!” He meant he wanted to draw on her, sketching a black line around her eye and down her cheek. She exclaimed to startled onlookers, “I will never wash my face again!” Later at a lunch, Agam thrust colored pens between his fingers on one hand and drew my portrait on a menu.

The Baker Museum’s magnificent exterior gate is the abstract creation of metals master Albert Paley, of Rochester, New York, whose sculptures are found across the United States. He also made the polished bronze ribbons forming Hayes Hall’s front door handles, which seem to welcome one with a “Ta-dah!”

In Fort Myers, Barbara Hill, former executive director of the Naples Art Association, is just stepping down as the city’s public art consultant. She has assisted in a burst of civic contemporary sculptures acquired over the last nine years, bringing visual excitement to downtown sites. Hill compiled a list of the sculptures and shared it with me on a walking tour.

Perhaps the most unusual sculpture is Marks & Brands by San Diego-area sculptor Peter Mitten, who has created a two-part work of art. Part one, Stacked Brands, 2013, a randomly built vertical steel assembly made up of old-time Fort Myers area cattle brands. This piece, 8.5 feet tall, is mounted on a base inside a new travertine marble reflecting pool in the plaza in front of the new Fort Myers Regional Public Library, 2450 First St.

The sculptor, creating a less obvious homage to Fort Myers’ history in a second installment, has embedded four bronze plaques, each 1 foot wide and 2 feet long, along the sidewalk curb on First Street. They simulate the hoof marks cattle used to make in the then unpaved street en route to Cuba and other markets. Both works are a fine aesthetic tribute to an almost forgotten past.

By 2012, David Black, of Columbus, Ohio, had created more than 25 monumental abstract sculptures in this country and abroad. Black, inspired by a woman performer he saw doing a fire dance in Fort Myers’ Centennial Park near the Caloosahatchee River, erected there a 25-foot-tall, 22-foot-wide steel sculpture entitled Fire Dance. The work suggests in its tall red-painted form what its title implies: a giant abstractly whirling performer. It was the City of Fort Myers Public Art Committee’s first art commission.

Anyone who has visited the Sidney & Berne Davis Art Center, 2301 First St., Fort Myers, has probably seen Lux, Caloosahatchee Manuscripts, 2001, near the center’s front steps. They are Florida Power & Light Company’s gift to the city. These two bronze cylinders are lit from inside and pinpoint American and Latin texts cut through the metal. At night, they emit oddly lettered shadow images on the art center’s steps and columns. They are the work of Jim Sanborn, a Maryland sculptor who is best known for Kryptos, his fittingly encrypted sculpture at the Central Intelligence Agency, Langley, Virginia.

Among new sculptures coming soon to Fort Myers is What Dreams May Come and How They Fly, 2015, by Cheryl Foster, of Maryland. Made of steel and glass mosaic, the work will stand 5 feet tall and 10 feet wide along Martin Luther King Boulevard at Clemente Park.