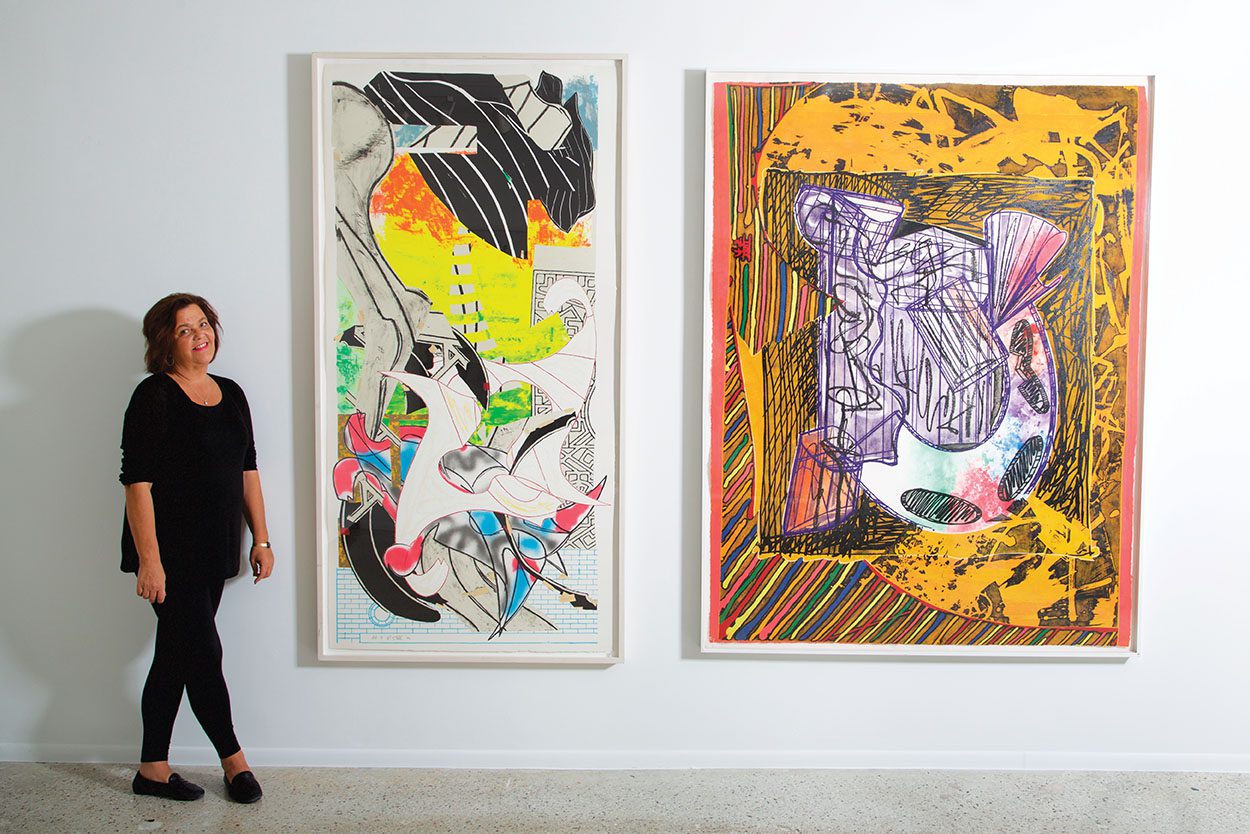 I experienced a Wizard of Oz moment upon entering Naples’ HW Gallery. I was meeting Frank Stella, one of America’s most lauded abstract masters, whose paintings and sculptures burst with dynamic forms and bright swirling color.

HW Gallery had taken out its front window to fit in Stella’s sculpture, Hacilar Level III, an aluminum sand casting painted in a rainbow of enamels and almost 8 feet tall by 11 feet wide. This rambling panel was 16 inches deep and weighed 800 pounds. Philip Johnson, the late noted architect, had told me in an interview at Glass House, his famed Connecticut retreat, how he gleaned creative strength from a Stella he owned, a large abstract Medusa head exploding on its stand. So I expected to see a powerfully built sculptor like Julian Schnabel or Alexander Calder. Instead, Stella was small and full of nervous energy.

It was March 2001. Despite Naples’ warmth, Stella refused to remove his furry vest. He had flown in from New York and a large cold studio. He explained how smoke rings had inspired his powerful sculpture. The couple who purchased this work later donated it to the Fort Lauderdale Museum of Art, says HW Gallery owner Lauren Greenough.

She recalls how surprised and delighted Stella, now 79, was with the sun-drenched colors he saw here, but he has not returned. He is probably too busy. His third retrospective exhibition opened in October at the new Whitney Museum in New York City—after earlier ones at the Museum of Modern Art. For fun he owns racehorses.

Another shocker on our local scene was meeting Marcus Jansen (whose When History Repeats is at right), whom I regard as Southwest Florida’s most original artist, in his Fort Myers studio some years ago. The space was raw, like the dusty warehouse it was before he moved in. It is now a large, clean, white rectangle where Jansen exhibits his large and powerful dreamscapes when they are not touring galleries and museums around the world. Ms. Greenough had to remove her front window again to accommodate one of Jansen’s large paintings.

I was also surprised at Jansen’s last exhibition at the Sidney & Berne Davis Art Center in Fort Myers. A microphone was thrust at me before a motion picture camera with music pounding in the background. I was asked to give an instant critique. I had only seen the pieces moments before, but such are moments in the art world.

Basically, there are two forms of fine art here: that which challenges the mind and probably has a hefty price tag because of its creator’s fame, and that which pleases because it captures a special, probably realistic, moment for someone who knows what he or she likes. It is very well to select art on personal taste because it can remain personally important. But it is unwise not to consider how an art work could increase in value, a factor in most art auctions and on the minds of most collectors.

Collectors will find considerable difference in the attitude and appearance of private and public art galleries in Naples and Fort Myers. Although less than an hour apart, the art-filled cities are startlingly unalike.

Naples’ private galleries are quietly elegant, like many in New York City. Similar spaces in Fort Myers are much more casual, possibly influenced by the city’s annual outdoor arts festival and popular Art Walk. Most Naples galleries are conservative, offering mostly realist or representational art but not ignoring abstract or other contemporary styles.

The Meeks represent 45 American artists whose work, both contemporary and of the 20th century, range through many established masters. They also represent late artists’ estates and arrange museum exhibitions for such distinguished artists as late egg tempera master Robert Vickrey and New York’s Will Barnet, who had a long and successful history here.

Bill Meek’s role in Naples is unique. He was the catalyst for art collections donated to The Baker Museum at Artis—Naples, the Golisano Children’s Museum and the Naples Art Association’s Legacy Collection. The galleries also co-sponsor the annual Naples Visionaries in the Arts Awards honoring activists. Among the highlights of the gallery is Still on My Mind, 2010, a geometric painting by American abstractionist Eugene Johnson. It fits the contemporary style of Harmon-Meek|modern. The light blue color in this window-like abstract suggests the artist’s old memories of Southwest Florida’s balmy days. Johnson has lived in Sarasota and Brazil and currently paints in Mexico. Also, there’s Water’s Edge, 2012, (at left) in autumnal colors, a 23-by-19-inch oil painting on wood by Southwest artist Kirk Tatom. Not conventional like other realistic landscapists, Tatom brings a sense of intense meditation to his quiet and unusual subjects. He specializes in pastoral scenes and likes to paint black-faced sheep.

Driving north on I-75, many know Fort Myers for the museums of the Edison & Ford Winter Estates. But the city has no art museum. Instead, a strong arts environment, including galleries with wine bars and other specialties, thrive here.

One of Lee County’s pluses is the outward-reaching, civic-boosting Alliance for the Arts, 10091 McGregor Blvd. Located in a modern building, it offers besides art classes the Union Artists Studios, a gallery arrangement of local artists’ work, including handmade objects, for sale.

Six professional artists are located nearby in The Art Loft, a cluster of studios in the historic Edwards Building, with its Old Florida roof, mezzanine and lantern cupola at 10051 McGregor Blvd. Both buildings occupy a 10-acre site, which allows Alliance for the Arts to sponsor Greenmarket, where farmers and others sell locally grown or handmade products every Saturday.

Downtown, in the River District, Arts for ACT Gallery and Boutique, 2266 First St., 337-5050, is committed to helping women and abused children. Operating also as a gallery, it exhibits paintings and sculpture year-round in a charming reclaimed vintage store, with two-week shows in season and monthly ones the rest of the year. It coordinates its “Artful Evening” artist receptions with the downtown Fort Myers Art Walk.

Arts for ACT (which stands for Abuse Counseling and Treatment Inc.) annually sponsors a gala art auction to which many area artists donate work. Modern artist and art adviser Veron Ennis has a studio in The Art Loft (her Glacier Express is pictured below) and holds art-related meetings there. “I wouldn’t think of not giving my work to the Arts for ACT auction. It is that important,” she says. Ennis is also a member at HW Gallery, Naples. She mixes her own paints to create nonobjective patterns on primed wood surfaces and also constructs wood cubes with color elements. The blue color and natural elegance of a glacier on the South Island of New Zealand inspired her Glacial Drift.

A very popular Fort Myers site is the Sidney & Berne Davis Art Center, 2301 First St. The former post office opened as an arts hub in 2009, with a large open floor, walls for art exhibitions, musical evenings, a music school and weddings. A first night there can be a time to remember.

I won’t forget Jansen’s opening there some seasons ago. I was impressed with the native New Yorker’s post-industrial depiction of urban mean streets. He works without preliminary study, beginning a new composition spontaneously on freshly painted surfaces.

Jansen currently opens his now redone studio and gallery called Unit A, 1922 Evans Ave., about 10 blocks east of First Street, to the public during Art Walk evenings. (At other times, call 293-430-1053 for an appointment.) A veteran of Desert Storm, Jansen now exhibits his unique landscapes and portraits in galleries and museums around the world.

For the young, or young at heart, though not necessarily my taste, is HOWL Gallery/Tattoo, 4160 Cleveland Ave. A fine gallery and tattoo shop, it offers macabre comic book art and illustration—plus a craft beer and wine bar—and the opportunity to have an artwork pricked (or pierced) into your epidermis. Andy Howl, gallery co-owner with his wife, Alainna Zwiernik, has a BFA in comic book illustration from Savannah College of Art and Design.

Howl was a co-founder of Fort Myers’ Art Walk and Music Walk. Gulfshore Business honored Howl with a 40-under-40 Award in 2011.