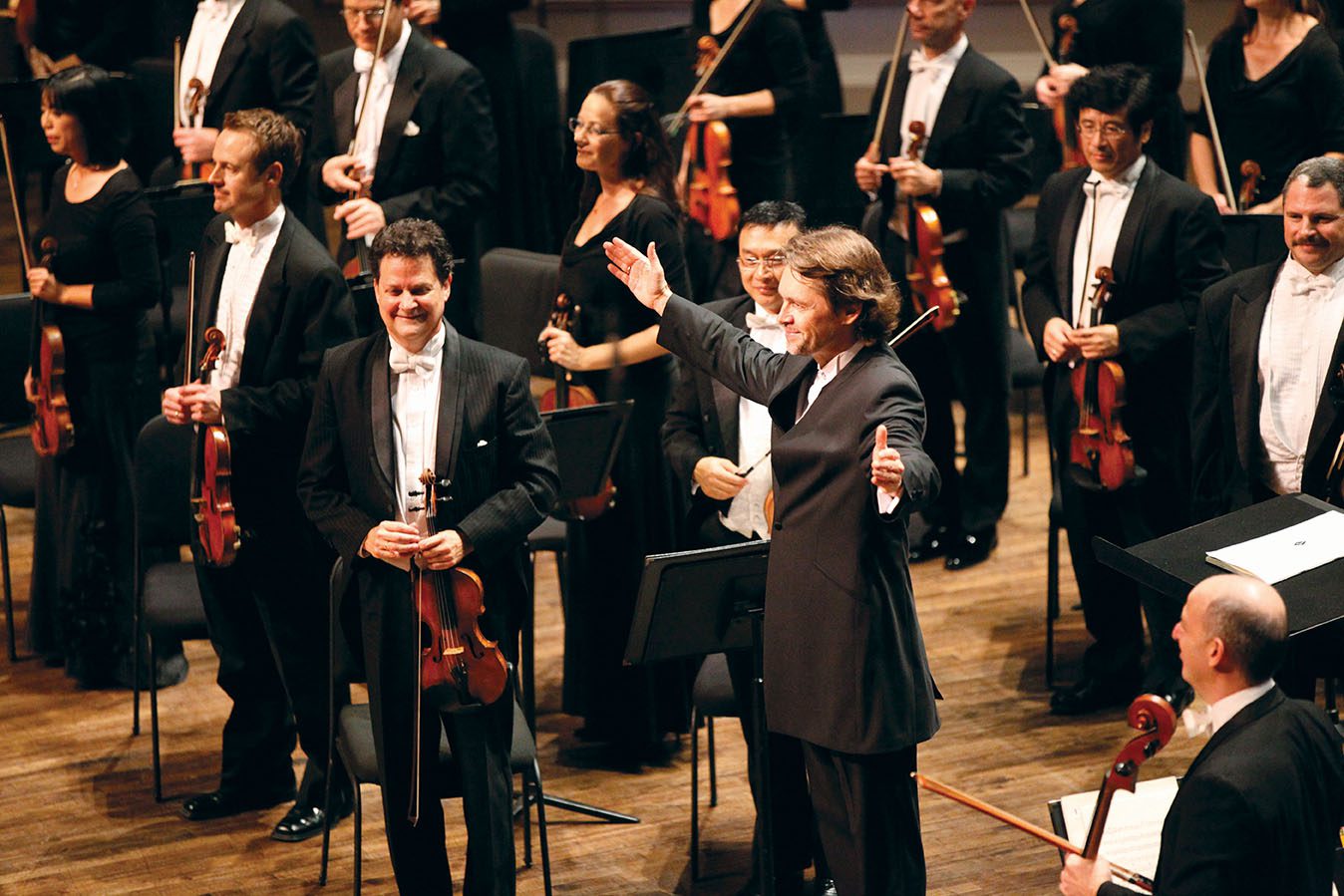 When conductor Andrey Boreyko takes the stage of Hayes Hall at Artis—Naples, an electrostatic charge practically crackles in the air. The musicians on stage sit up a bit taller. The audience’s murmuring quiets. Boreyko strides to center stage, a long, lean figure in black, extending an arm in welcome and acknowledgement. The audience applauds vigorously, then quiets again. Their instruments poised, the musicians watch him intently. He raises his baton and they begin to play. Together, they follow his lead, responding to a small nod of the head or flick of a finger. Music soars through the hall and the audience listens, captivated.

Boreyko began as music director of Artis—Naples in 2014. Currently in the middle of his second season, he has brought a level of intensity and musical excellence to the Naples Philharmonic welcomed by musicians and audience members alike. We wanted a closer look at the music and the man.

Born in St. Petersburg, Russia, in 1957, Boreyko has worked with many of the world’s leading orchestras, including the Berlin Philharmonic and the London Symphony. He is currently the music director of the National Orchestra of Belgium as well. The Naples appointment, which was recently extended to 2020, is his first American post.

Boreyko is warm and candid when we talk two weeks after the concert at the offices of Artis—Naples. He chooses his words carefully, occasionally searching for the correct English word. (He also speaks Russian, Polish and German.) He has sandy-brown hair, a Van Dyke beard and an angular, handsome face.

“I was prescheduled to become a conductor,” he says, his eyes crinkling into a smile. He began studying for his current career at the tender age of 7 at a school for musically gifted boys in St. Petersburg. “It was a half-day of music and a half-day of regular school. So no time for soccer, no time for football.” He stayed there for 10 years. He and his fellow students were so advanced by the time they finished they could have skipped the first two years of university.

At the Rimsky-Korsakov Conservatory in St. Petersburg, his head was turned briefly by the study of composing. He had a wonderful teacher and thought he might have found his calling. But then his beloved mentor died early, and, stunned, Boreyko rethought his path. He decided his bigger talents were in conducting. “The world didn’t need another mediocre composer,” he says.

Still, the strong background of composition is never far from Boreyko’s work. “A very beautiful goal for me is to serve the composer,” he says. “And his wishes and expectations are all in front of me in the score. If I ignore all his instructions and notes and signs, the music becomes like a map without words. You have contours only and you don’t know if it’s a lake or a city. There are many good interpretations [of the score]. But some conductors make very big changes. They say that the composer would approve. But for me, it’s always a little bit suspicious.”

Concertmaster Glenn Basham, the lead violinist who sits just to Boreyko’s left on the stage, has noticed. “[Boreyko has] … an incredible respect … for the composer’s intention. He has studied the score on a level that few conductors I’ve worked with have.”

But Basham admits it’s not always easy to reach his stratospheric standards. Basham recalls a recent concert where he was holding a long note on the violin. “I was running out of bow and wanted to sustain the note,” so he changed direction with his bow. “After the concert Andrey congratulated me and said it was fantastic, ‘But do you think you could just hold it for one bow?’” Basham laughs. “That’s a really, really difficult thing to do. But we all know that whenever he’s asking something that might be challenging, it’s always about the music. It’s not for any other reason. What we do is interpret these musical ideas of some of the great musical minds in history. And anything that might distract from that is a problem for him. And he’s there to try to solve those problems.”

Boreyko’s hope as a conductor is to present the highest-quality music and allow the audience to find the beauty in it—and enjoy. “You don’t have to be a musician to love classical music,” he says. “Just let the music flow through your body, through your ears, through your mind. We all understand music. It’s all around us. The songs of the birds, that’s also music. We are not thinking, ‘I don’t understand the sound of the wind.’ We’re enjoying the sounds of the wind or the ocean at night.”

There’s a recent addition to the thick Philharmonic program the ushers hand out before a concert: a two-page spread called “Andrey’s Recommendations.” It’s a list of books, recordings and films that provide background and context for the pieces on the program. In a fall program that included a Brahms concerto, Boreyko recommended the book The Unknown Brahms by Robert Haven Schauffler. Boreyko writes, “After reading [this book], I find myself conducting the music of Brahms very differently! It has really helped me to ‘feel’ him as a human being.” And in the list of recordings related to Strauss’s Also sprach Zarathustra: “… the band Deep Purple’s cover of Ike and Tina Turner’s song River Deep, Mountain High from the album The Book of Taliesyn was clearly influenced by this work.”

The list was Boreyko’s idea and he supplies it for each program. At the request of an audience member, he now compiles his picks even earlier, on artisnaples.org, so listeners can read up or catch a movie in advance of the concert.

Boreyko has made his mark on the other pages of the program, too, of course. “It’s my hobby to make concert programs,” he says with a smile. He laments that some orchestra’s offerings in an evening “ignore each other,” while he believes it’s critical to find the connections between musical works.

“You could take a source, for example Romeo and Juliet, and find pieces from composers from different centuries. If you put them together in a program, you are not only presenting different points of view on Romeo and Juliet, but also recalling Shakespeare to the audience. And maybe somebody will go home after the concert and go to the shelf and open a very dusty old book that he hasn’t looked at since college. And open it and read it. And I would be very happy if that happened.”

Certainly you could listen to a single piece of music at home. But that’s like cooking a single dish, Boreyko says. “When you come to the concert, you hear pieces that are communicating with each other.” And that’s like a full dinner. It’s a different and more satisfying experience, he says, like having a professional waiter, sommelier, entrée and dessert.

Audience member Anna Rac, of Naples, is thrilled with Boreyko’s work. “[His] musical interpretations are fresh, innovative and thoughtful,” she says. “There seems to be no ego, just a wonderful respect for the music. And I also see a new respect of the orchestra for the conductor and vice versa. I was truly amazed at the performance of the Strauss Also sprach Zarathustra [in October 2015]. I usually do not call friends specifically to tell them to attend a performance, but this time I did.”

He has admirers far beyond Southwest Florida, too. At his debut with the New York Philharmonic in 2007, an orchestra he has conducted regularly since, a New York Times critic wrote, “Mr. Boreyko … wrapped the Philharmonic in [Mozart’s] charms, drawing sparklingly bright wind hues and a trim, silken strong tone.”

Midway through his second season, things are going well for Boreyko, who lives with his wife, Julia Volk, a concert violinist, in Naples. (They have a grown daughter who lives in Berlin.) He has everything he needs here in Southwest Florida, he says: a great orchestra, a good hall, the ocean, the sun. “There is even Camilla,” an Eastern European Foods Market where he can find Russian delicacies and gifts for visitors.

“My favorite thing is to take long walks on the beaches near Naples Cay,” he says. “I can get my exercise and think about programming for the orchestra.” What does he listen to when he’s off-duty? Gregorian chants are a favorite.

He is happy with the work he and the orchestra have done together thus far and looks forward to it getting even better. And the feeling is mutual.

“It’s a life’s calling to be a great conductor,” says Basham. “And that’s what he’s done so amazingly well. Since he was named music director, the standards are significantly higher. The expectations are higher. And it’s not that we got a memo about it. Everyone just wants to do it. It’s very exciting what’s going on in this place and with the orchestra these days.”