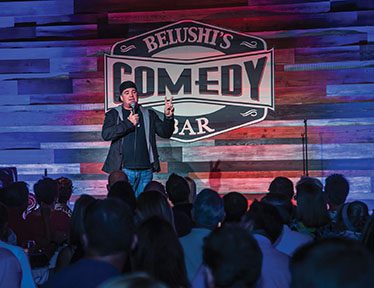 Mike Haddock, a stand-up comic based in Fort Myers who goes by the stage name “Max Mosquito,” has covered the gamut of comedy clubs. He’s played nice, clean spots where the audience was listening and the bartender comped his drinks. He’s played venues that resemble church basements, with dropped ceilings, white plastic folding chairs and inattentive patrons. He’s gone to a show as a fan and had a surprise invitation from the headliner to do a few minutes onstage. It’s fair to say that he’s game. And he’s going with the advice someone once gave him: “If someone gives you time onstage, take it.”

Still, he has mixed feelings about the stand-up comic scene in our area. “I wish there were more local stages to hit,” he says. “The only way to get better at comedy is by performing. A musician can go home and practice by himself. But when you’re a comic who’s just written a new bit, in order to shake the funny out of it, you have to do it in front of a crowd.”

Hence, the conundrum of the Southwest Florida comedy scene: big enough to feature a few established clubs, such as the Off The Hook Comedy Club in Naples, but not large enough to support many local performers full-time. But the comics are here. They may be selling real estate or waiting tables during the day, but at night, they step in front of the spotlight to give their dream a shot. So, they make a decision—stay in Southwest Florida, for better or worse, or take a chance and use it as a launching pad to something bigger.

Haddock has faced that decision. He has worked as a comic in Southwest Florida since 2006 but doesn’t make a living performing. He says few local comics do. He works as a real estate agent to supplement the pay he gets for gigs, which falls generally in the $50-100 range. He knows he will have to move to New York City or Los Angeles if he’s really going to make it as a comic. But, as the father of young children, that wouldn’t be so easy to do. Plus, he says, “I love it here.”

In the meantime, as he considers his options, he’s taking action to produce more stage time and a better payday for his fellow comics. He’s the creator of the Comedian’s Ball at the Seminole Casino in Immokalee, currently in its third year. In past years, approximately 60 local comics showed up to compete. Early rounds were in January and February and the finals were in March. The casino distributes some $15,000 in prize money, with the winner eligible to win about $7,000 of that; no small paycheck for a comic slugging it out on the local stages.

Haddock is putting his money—or at least the casino’s money—where his mouth is. “I think there’s a lot of great talent here in Southwest Florida,” he says. “I try to hit at least one open mic per week, and there’s always somebody trying to do comedy.”

Tonya Kay is another performer you’ll see out and about on local stages. But while Haddock built his career entirely from his Fort Myers base, Kay came to Naples with a solid performance career behind her. She’d made a living as an performer in Nevada and Oklahoma, entertained the troops on two Department of Defense overseas tours, and done some TV and movie work in Los Angeles. She moved to Southwest Florida in 2011 when she grew tired of the LA lifestyle.

She performs about once or twice a month locally, she says, and also picks up more lucrative corporate event work when she can. Like Haddock, she is not making a living as an entertainer here, and she also sells real estate to supplement. She too has discovered a dearth of places to perform in the area. “This is probably the least best place to [make a living as a comic],” she laughs, “just because there are not a whole lot of venues.”

“Ideally if a comic wants to make it, they’ve got to do the road work, or be in LA or New York, where you can be seen, and do it regularly, and be on stage all the time. I love it here,” she says. “But if I’m going to do comedy, I’m going to have to leave at some point.”

And just where do comics perform in the area? Established clubs include Laugh In in Fort Myers and Off The Hook Comedy Club and Old Naples Comedy Club in Naples, with one-off events popping up here and there in various spots. (The future of Belushi’s in Fort Myers is uncertain after its home, the Titled Kilt, closed in January.) Brien Spina, who owns Off The Hook, features national headliners at his club. After some years of building his business, and moving it from Marco Island to Fort Myers and now to Naples, he’s having better luck, from a business perspective, than Haddock and Kay are. “We’re busy all the time,” he says. And he’ll be adding a new venue to his holdings, the Southwest Florida Performing Arts Center in Bonita Springs, in the spring.

“At one point we probably had about 20 solid Florida openers in the Miami area and here, but about half of them have gone to LA or New York.” — Brien Spina, owner of Off The Hook Comedy Club

Part of it has to do with pop culture, and the success of stand-ups these days. “You look at who’s popular in terms of actors, it’s Kevin Hart and Amy Schumer—they’re all stand-up comics,” Spina says. “Almost everybody the networks are hiring are stand-up comics.”

Still, he knows it’s difficult for the less-than-famous comics to get the stage time they need to hone and perfect their acts. To help foster local talent, Spina runs open mic nights about once a month, where he gets about eight to 20 comics, depending on the month. And in the spring, he says, Off The Hook will start offering comedy classes.

It’s all in the name of refilling the comedy coffers, so to speak. “At one point we probably had about 20 solid Florida openers in the Miami area and here, but about half of them have gone to LA or New York,” he says. “They’ve kind of moved up the ladder. They’re looking to become solid headliners.”

And he knows the next talent is probably in line at that open mic. “Florida has just been a huge breeding ground for comics. Guys like Daniel Tosh and Larry the Cable Guy … there are so many stars that came out of Florida.”