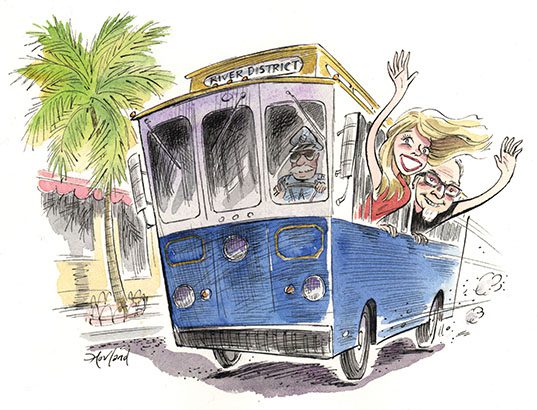 For someone who is at her most content lounging on her sofa, sipping a dirty martini, wearing a muumuu and thumbing through the latest issue of Vogue, I would call myself relatively adventurous.

I’ve paddleboarded in local manatee-infested waters. I’ve donned leather chaps, channeled my inner Annie Oakley and ridden a horse. And despite no athletic ability whatsoever, I’ve learned to play a mean game of pickleball without fracturing a limb.

But, if there’s one thing that holds me back from many an adventure, it’s my complete resistance to driving. I’ve never enjoyed it, and, in fact, on Southwest Florida roads—especially in the height of season—it terrifies me. Whether it’s I-75 or U.S. 41, I’m usually white-knuckling it all the way, complete with one foot on the gas and one foot on the brake. I’m that driver you hate, which is why I try to stay off the roadways.

I grew up here on the Gulfshore. Most kids couldn’t wait to get their learner’s permits at 15, and by 16 they were driving souped up Trans-Ams and Camaros from the north end of Lee to the southern tip of Collier. It’s a good thing I had lots of friends with cars who loved to drive or I would have been a teenage recluse—a Greta Garbo in stonewashed jeans. I didn’t get my driver’s license until I was 22, after failing the test twice (don’t get me started on parallel parking).

Maybe my aversion to being behind the wheel stems from my glamorization of public transportation. There are so many fabulous old movies featuring beautiful people riding in trains, or sweeping through Grand Central Station in Manhattan on their way to somewhere amazing, or any film set in San Francisco where the characters jauntily hop aboard the cable car (clang, clang!) to get from place to place. And while public transportation certainly lacks here in our lovely little corner of the tropics, we do have our trolley.

The trolley provides a delightful little tour through the most historic and charming part of Fort Myers as it winds through downtown and the River District. With wooden benches, brass accents and big, open windows, it affords passengers a wonderful view while ambling down First Street, picking up riders for free.

I didn’t get my driver’s license until I was 22, after failing the test twice (don’t get me started on parallel parking).

I’ve enjoyed plenty of downtown trolley rides. In addition to my abhorrence for driving, there’s also the stress of trying to find a place to park, and just about every downtown I’ve ever visited is challenged in that area. So, there’s nothing like simply pulling a cord to get the driver to stop in front of your favorite watering hole for happy hour and not having to worry about getting a parking ticket. Not to mention the freedom of knowing you can enjoy that second (or third) cocktail because you have a designated trolley driver. Snowbirds in the high-rise condos east or west of downtown hop the trolley regularly to get to monthly events like Art Walk and Music Walk, or to have dinner in one of the River District restaurants, or to catch a show at the theater. But they’re not the only ones, and it made me wonder about other folks who prefer a trolley ride as opposed to their own car. So, I recruited my friend, downtown resident and art curator Terry Tincher, to go on a trolley adventure with me to meet my fellow trolley aficionados.

On a breezy, warm Wednesday afternoon around 5, I boarded the trolley near my home about a mile east of downtown while Terry was set to join me near his place at First and Hendry streets in the heart of downtown. There were two ladies in their 70s already on board and I eavesdropped on their conversation.

“This is such a nice way to see the neighborhood,” said one.

“I could ride it all day,” mused the other.

We passed the historic Burroughs Home and the Langford-Kingston Home, then the shiny new downtown library, the stately Sidney & Berne Davis Art Center, Florida Repertory Theatre, my friend Terry on the corner, the Patio De Leon…. Wait—we forgot Terry. Quickly I pulled the cord for the driver to stop (one of the perks of the trolley is that it will stop anywhere you wish, as long as it’s safe to do so). I got out and walked the block to where Terry was standing.

Another joy of the trolley is that just by waving your hand anywhere along the route, the driver will happily pick you up. Even better, there are actually two trolleys making a continuous loop round and round the River District in opposite directions. So, we crossed the street and within minutes the second trolley picked us up. We rambled down Second Street past shady old trees and bungalows built in the 1930s, and looped back around to the main drag again as the sun started to set over the river. Back downtown, a group of festive young people came aboard just “for the ride,” and Terry and I chatted them up.

Cesar Aguilera is an artist from Ecuador who told us that riding the trolley reminds him of his hometown of Quito, where open-air buses are the norm: “I like it because it’s relaxing; there’s no rush and you can enjoy the sights.”

His friend, Reynier Llanes, also an artist, is 30 and from Cuba. “This is an awesome way to get around,” he told us. “It’s a perfect setting to strike up conversations and get to know people.”

Melissa DeHaven, who works at the Sidney & Berne Davis Art Center, is originally from Boston and told us that riding the trolley makes her feel like she’s back in a big city.

As the trolley took us past gorgeous riverfront views, almost to the Edison & Ford Winter Estates and back again, passengers boarded at the First Street Village Publix, their arms full of groceries, while others got off near The Veranda restaurant for dinner. Meanwhile, we all talked—about art, culture, politics—and at one point we decided the trolley would be even more fun if it served wine. We switched seats for different views, took photos with our cell phones and, as the two trolley ladies said when I first came aboard, decided that it really was the best way to see the neighborhood.

Terry and I got off at Dean and First streets and headed to The Art Bar for guava mimosas, with a few of our fellow passengers joining us to continue the evening. We all imagined what Southwest Florida would be like if there were plenty of trolleys that ran from the north end of Lee County all the way to the southern tip of Collier—and we agreed, what a fantastic adventure that would be, hopefully, someday.

If you ride: The Downtown Trolley is operated by LeeTran and runs seasonally from mid-November until April 27, 2016. Visit rideleetran.com for schedules. For more information, call 533-8726.