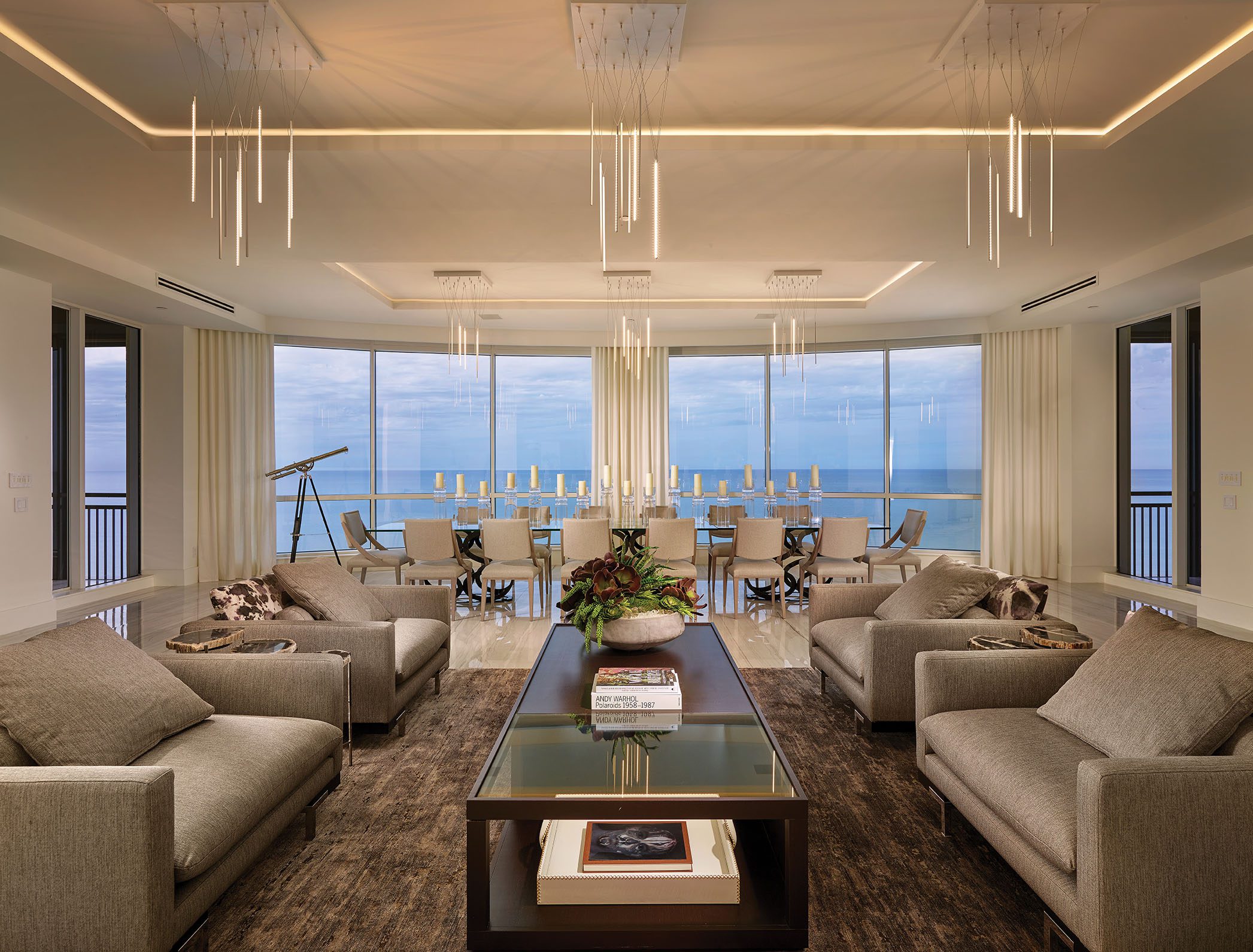 Consider this the first shot fired in the Southwest Florida penthouse wars.

The 22nd floor of The Seasons at Naples Cay, located at 81 Seagate Drive, has suddenly upped the ante for what it means to be exclusive and luxurious in Southwest Florida. And that’s saying something. The 11,698-square-foot residence (with an additional 1,750 square feet of balcony) features five bedrooms, five and a half baths, and 360-degree views that will make even the most ardent groundlings weep. But even with the blinds drawn there is plenty to make this home stand out from the rest.

Built in 2002, but never lived in, the unit was completely gutted and renovated in the second half of 2015 to standards that one should expect from a premium property. Everything from one-of-a-kind lighting fixtures to custom millwork to Italian doors throughout place the home clearly into the 21st century.

“It was an antiquated transitional apartment—beige marble in the bathrooms, wooden cabinets everywhere, beige marble countertops in the kitchen—everything you would have seen in Naples 12 years ago,” says Miami designer Steven G., who was tasked with resurrecting the jewel. “We basically gutted the apartment. We removed walls, the kitchen … and basically turned it into the ‘lifestyles of the rich and famous.’ Nothing remains of the old unit. We made lots of changes to the current floor plan.”

Basically given free rein by the homeowners, Steven G. put down massive 31-inch-by-72-inch Italian porcelain in a soft greige striated pattern throughout both the interior and exterior portions of the home, helping keep the expansive space in scale. The main living area covers 1,200 square feet and incorporates a gorgeous 14-person dining area with the Gulf of Mexico as a backdrop, two separate seating areas and a music room with the requisite baby grand piano.

“This is a level of luxury that I see as the future of Naples,” says listing agent Jane Bond of Premier Sotheby’s International Realty. “I see stuff like this in Tribeca and SoHo. … This level of modern is functional. It has a nice warm palette throughout. It is seamless with the Gulf. When you walk in, it still has a coastal value, but it’s more luxurious.”

And though it occupies the same space, it is worlds away from its former self.

Originally purchased as an investment back in 2006 by Cimex, a Prague-based real estate holdings corporation, it remained beige and unloved until 2015.

“Naples is an amazing city with many luxury properties, but there are very little to no modern high-end products to offer,” says Jana Sobotova, a founding partner of Cimex. “We felt the time was right to remodel in this vein.”

And now you barely need to step off the elevator to experience the taste and style high-end buyers in New York, Chicago and Los Angeles have come to expect, without sacrificing livability.

“The project as a whole came out amazing and we love it,” says Sobotova. “The final product emphasizes more of what the demographics are asking for today: beauty, combined with clean lines, exclusive furnishings, unique light fixtures and art. This design concept lives seamlessly with coastal luxury lifestyle living in Naples.”

Bond calls the unit’s style “coastal modernity.” Steven G. calls it “soft contemporary.” We call it “move-in ready.” And as of press time, you can call it “home” for $17.995 million. All furnishings, fixtures and artwork are included.

Restaurants with a singular focus on a favorite liquor keep spirits—and knowledge—high.

Designer Dwayne Bergmann’s ingenious transformation of a Fort Myers home layers in four decades’ worth of collectibles.
CONTACT US TERMS OF USE