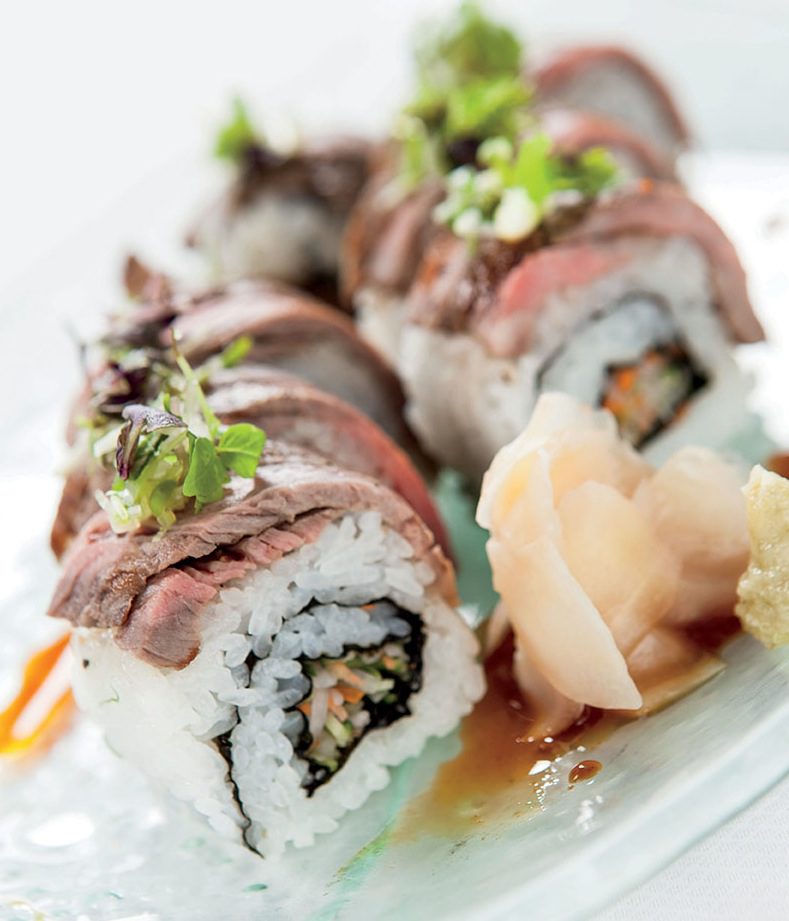 Best substitute for Sunday supper: In Italian households where Grandma makes the red sauce, it’s hard to find another source that’s up to snuff. At Osteria Celli in Fort Myers, the pasta (left) is made fresh, and the sauce is a sumptuous marriage of quality tomatoes and just-plucked herbs.

Best reason to go ’nuts: At Petar’s Restaurant, which opened in Bonita Springs recently to much well-deserved praise, a risotto takes a completely unexpected turn with the most savory results. A creamy base interwoven with puréed butternut squash is injected with chive oil and fresh dill.

Best time to say ‘They’re grrrrrrrreat!’: Everything from the culinary -school-trained chef at his old-school Joe’s Diner in Naples is insanely good, including the decadent sausage gravy, but we get giddy over the crunchy French toast that’s coated in Frosted Flakes and studded with bits of pecans and walnuts.

Best benefit of globalization: At Naples’ 21 Spices by Chef Asif, the “Progressive Chicken” appetizer embodies its mission of modernized Indian fare through a helping of sticky sweet-and-spicy nuggets highlighting China’s influence on the subcontinent.

Best use of half a pound of bacon: The WHO may have told us to eat processed meat sparingly, but make an exception for the BLT at Naples’ Bill’s Café, which takes an often sad, soggy, barely there sandwich and transforms it into a superstar. Nine slices of the cured meat prop up the thick, toasted bread to the point that you have to stretch your mouth to its limit to take a bite.

Best news for folks who want to drink well and eat very well: Somewhere in the past year, we saw the surge of the gastropub, a beer-focused bar serving gourmet food. At times, it feels more like a restaurant (TAG: The American Gastropub, Estero, pictured at right), and others it can translate to a heavier emphasis on craft cocktails rivaling those in any big city (Bar Tulia, Naples). Or, it channels an off-grid, pretty casual restaurant with awesome food and a bonus of great beer (Zen Asian BBQ, Naples, and BRB Gastropub, Fort Myers).

Best way to wine down: Booze has been mixed into desserts for years, from liqueur chocolates to rum cake. A new ice cream parlor in Fort Myers, Sandbar Breeze, however, is kicking it up a notch. A good portion of the 15 or so sorbet flavors incorporate either wine (its raspberry-shiraz is refreshing and sultry at once) or something stronger (like the margarita with a hint of tequila).

Best silver lining: In one of the year’s sadder developments, we lost a truly talented chef when Charles Mereday closed his three award-winning restaurants and left town. But we have been lucky that three of his recruits have landed with their feet firmly on our sandy turf: Joe Pittman is now the executive chef of Azure in Fort Myers (and deserves a standing ovation; see page 232); Jay Bucklin is heading the kitchen at TAG: The American Gastropub, at Coconut Point; and Kim Bechtel, whose green tea terrarium dessert was a bit of an Internet sensation last summer, is growing her Naples business Sweetie’s Custom Cakes.

Best way to please your inner devil and angel: Something we all struggle with (unless you’re a robot) is how to make healthy choices. But when you go out, you usually just want something decadent. The owners of the catering company Service by Jordan opened the Garden Café this year in Bonita with a genius concept—the breakfast and lunch menus are split in two, each having a side of “lighter fare” and one of “local favorites” (a gentler way to say “splurges”).

Best proof we are America’s Riviera: When a great Naples French restaurant teams up with the owners of a 53-foot sailing catamaran to offer a sunset cruise then a two-course dinner for $64 per person, it’s good to be a year-rounder. The Chez Boet package runs every off-season from May 1 to Nov. 30, with a few weeks pause in June while the Boets are in France and in August when the boat gets its annual maintenance.

Best improvement on a childhood favorite: The special- item fresh berry lemonade at Jane’s Garden Café (left) on 3rd in Naples is simplicity at its finest. A giant frosted Tumblr cup comes full of an iced, perfectly sweet-tart take on the nectar—and crammed to the rim with whole strawberries, raspberries, blackberries and blueberries. It’s “Oh, my!” refreshing down to the regrettably last sip.

Best rule breaking: We’ve seen quite a few people take risks over the past year, and the dining public is reaping the rewards. Paradise Wine in Naples built a specialty wine store with a bar; Fort Myers’ Cork and Barrel dared to serve only small plates; and Harold Balink downsized to a 38-seater in Fort Myers, Harold’s, for personal happiness, and his food is reflecting it.

Best dessert for breakfast: If ooey- gooey frosting is at the top of your cheat list for breakfast, go right away to Restoratives Café in Estero. The owner’s family recipe for piping-hot, sugary cinnamon rolls is hands-down the best on the Paradise Coast.

Best “it” food ’hood: South Cape Coral, no question. From a Michelin-trained chef running The Office to the wood-burning grill and oven behind Seven Oaks, plus old favorites like Nice Guys, Fathom’s (formerly The Joint), Slate’s and Rumrunners, niche eateries and watering holes (like The Boathouse and a new brewpub from Wicked Dolphin) are being added at an exponential pace.

Best teacher’s pet: When chef Mike Mueller revamped Lurcat’s menu last year, people were impressed by the ambition of the endeavor—two-thirds of the Naples restaurant’s dishes change every two months. The Voyage selections, a romp through whatever culinary territory Mueller is intrigued by at the moment, have become such a surprise and delight. His degree is from the CIA (Harvard for chefs), and he trained under Andrew Carmellini and worked his way through the kitchens of Jean-Georges Vongerichten’s empire.

Best swooping save: It was a tough year for downtown Fort Myers with the despair of Zombicon, but two very different stand-outs opened to balance the bad news: The Standard, a hipster public house emphasizing fresh food, and The Lodge, a kitschy-yet-cool sports bar with ginormous screens and cold brews, including a self-tap system where trying anything and everything is the name of the game.

Best building on a good thing: Chops, under the Culinary Concepts umbrella, underwent an overhaul of its menu this year. It’s still a steakhouse (and its sister restaurant, Yabba, just became one). Many of the tried-and-true favorites have remained, but if you look closely, you’ll see nearly 50 percent of what is served is new or tweaked, but the changes were subtle and rolled out slowly to its two locations (Naples and Bonita). Case in point: The oysters “Chopafeller” traded a garlic cream sauce and king crab with the requisite greens for a Southwestern accent with jalapeño cream and chipotle sausage.

Where to get great Cuban food

Best case where the butcher knows best: One of Jimmy P’s Charred’s house specialties, a “Frenched” wagyu strip, is not to be confused with the “French” style on the menu that tops your steak with seared foie gras and black truffle shavings. The technique for the former rests in knife skills, slicing the meat before plating it—and you can’t beat the accompanying skillet of cheddar-loaded potatoes au gratin.

Best journey toward (food) enlightenment: The Ritz-Carlton is known and respected for many things. Although the relatively new sushi bar Dusk (a sushi sample pictured at left) has not drawn the local following it could, it should. The ultra-premium cuts of fish get beautifully presented with micro-thin slices of lemon or a sprig of chervil pressed on top.

Best break for your body: Give yourself a rest. Personal chef services have sprung onto our Southwest Florida market, and for roughly the same cost as going to a fast-casual restaurant they will deliver healthy, fresh food to your door—most often gluten-free and dairy-free (Fresh Fit Foods, Body and Soul Café and Sage Events), while some are more chef-driven (Here’s Howe Catering).

Best excuse for continued learning: What Naples may not have in the form of a culinary institute, it has in a plethora of opportunities to learn from the best with an ever-growing roster of cooking classes. Norman Love’s summer series at its Fort Myers Chocolate Salon, where you can master everything from layer cakes to macarons through hours of hands-on fun, is among the top. Sur La Table, Barbatella and The Good Life in Naples have built a loyal following, too, and Naples Originals’ first Foodie Camp with local chefs was a huge success in October.