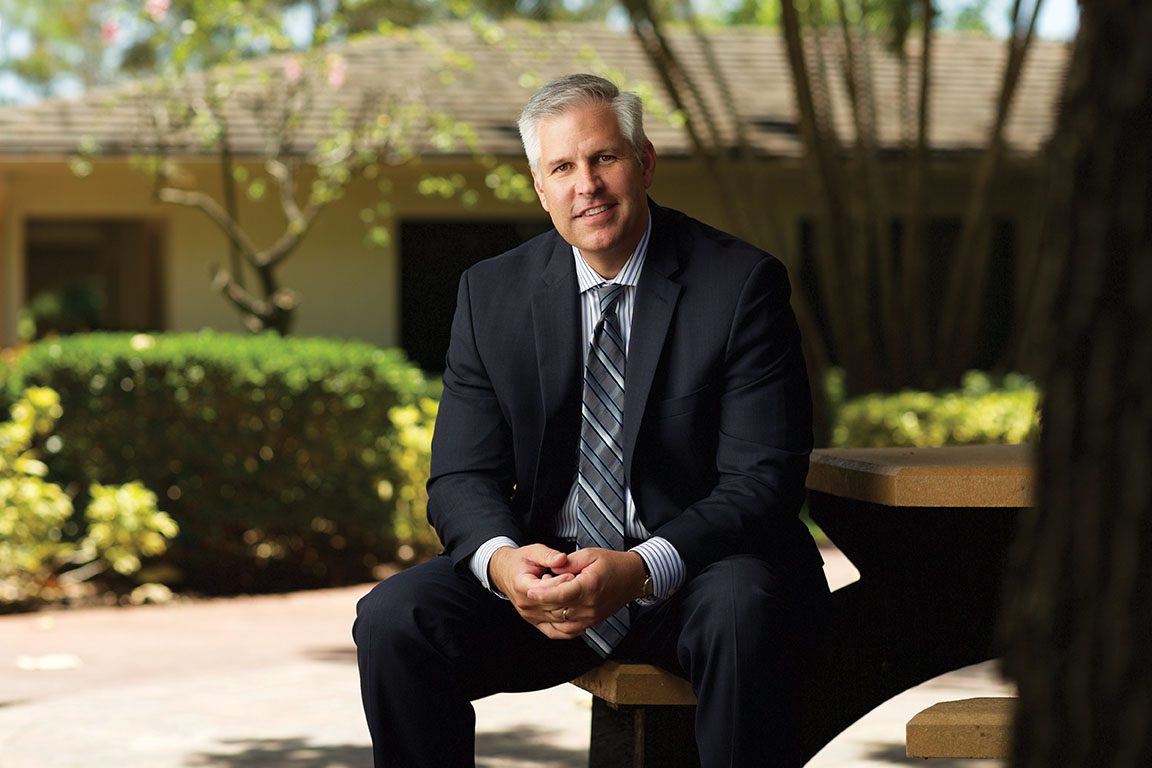 Once we’re past the facts about David Lawrence Center CEO Scott Burgess, like when he started (January 2014), where he came from (Arlington Heights, Illinois) and what the board of directors thinks now (happy, happy), I ask board member Bill O’Neill what kind of personal qualities Burgess brings to the center’s 300 employees and 40,000 patients a year.

He smiles. “Well, have you met him?” he asks. Not yet, I say. His eyes meet mine. He nods—I am about to be initiated, which O’Neill clearly believes will answer my question better than anything he could say, although he gives it a try. “Great diplomat. A listener. Very focused. When you meet him, you’ll see. He’s the nicest man.”

Burgess was hired from a pool of more than 100 qualified applicants when former CEO David Schimmel retired at the end of 2013 after 30 years with the center, having begun as its assistant director in 1984. Since then, David Lawrence has ballooned—most would say out of necessity—from one location and a $1 million budget to a main campus, two satellites, a preschool, a resale shop, a telemedicine program and a budget of $20 million.

“It’s a place with a lot of moving parts,” O’Neill says while we are seated in an office at the center’s main campus. “And it can’t be easy following a 25-year CEO, especially such an amazing leader and pillar of the community.”

Then enters a man whose height (6-foot-3 and, yes, basketball player, but only in high school) necessitates a larger-than-average suit (gray) so that the overall effect somehow makes him seem to float. Perhaps it’s also his calm demeanor, which doesn’t crank up even half a notch when I tell him that we’ll probably have to talk fast since we have just a short time. He was undaunted.

Burgess says he’s learned a lot about being a chief executive not only through education—earning a bachelor’s in psychology from Illinois State University and a master’s in counseling psychology from Concordia State University, plus working toward a doctorate—and experience in the field but also from his Christian faith and from sports. His dedication to the treatment of mental illness and substance abuse is personal only in the fact that, like most people, he has seen family members struggle. “I’ve always had a connection to this mission,” he says.

He says he takes literally a verse from the gospel of Matthew: “Whatever you did for one of the least of these brothers and sisters of mine, you did for me.”

In fact, Burgess’ friend of 20 years, Chris Colangelo, cites the same passage to describe Burgess. “He is a person who truly believes that when you serve the client, you give them your all. He’s a true believer in recovery,” says Colangelo, who worked alongside Burgess in vocational counseling at Northwest Mental Health Center, which later became Alexian Brothers Center for Mental Health—part of Alexian Brothers Health System, a large multi-hospital health care network. Burgess moved up at the organization to manager of aftercare services, director of program services and director of research, spending his last five years there as CEO.

“There are so many real-life tangible skills you learn being a member of a team,” Burgess says. “Leadership, negotiation, learning your role, communication skills. That the whole is bigger than the sum of the parts.”

“The people he worked with knew he wanted everyone to succeed as much as possible,” Colangelo says. “There’s not a lot of ego with him. There was never a hidden agenda. He’s a very genuine person. He was always in touch with what the center needed, and what the clients needed. He always maintained that focus.” There was O’Neill’s word again: focus.

“I’m used to funding challenges. That’s probably why I’ve got so much gray hair.”— Scott Burgess

Former colleague Rick Germann stressed Burgess’ can-do attitude. “The best example is when he became involved in a political task force to create a five-year strategic plan (for mental health services) for the state of Illinois,” says Germann, now associate vice president of Alexian Brothers Center for Mental Health. “Illinois has historically been known as a political nightmare and many have said, ‘Someone should do something,’ but few have volunteered to be that someone and enter into the tangled jungle that our state government is known for. Scott dove in and gave his all to this initiative, and in 2011 the governor of Illinois signed the bill into law and he came to our own center to sign the bill.”

What those qualities have wrought for the David Lawrence Center is Burgess shepherding the walk-in clinic from its infancy under Schimmel. Now about 2 and a half years old, the on-site spot is open weekdays for assessment on a sliding scale. “We’re trying to break down the real and artificial barriers to treatment,” Burgess says. He frequently cites a dismaying statistic: A person with a serious mental illness is likely to die 25 years earlier than someone else for lack of attention to physical health. “We know that what’s best is holistic care for the whole individual,” he says. He has established a partnership with the Healthcare Network of Southwest Florida to put a primary care clinic, and an agreement with Genoa to put a pharmacy, on the DLC campus sometime this summer.

Early intervention for young people has been a focus for Burgess as well. Collier County Public Schools and the David Lawrence Center have partnered to place a liaison to David Lawrence in the school system to coordinate access for young clients. A program that involves the Collier County Sheriff’s Department also has brought videos to the schools to educate students and teachers about mental health issues. In addition, this summer the center will add four inpatient beds for children to the four that exist today.

Mental health funding will continue to be a challenge in the state that ranks 49th in spending per capita, according to most sources. Illinois doesn’t fare much better, Burgess says. “I’m used to funding challenges,” he says. “That’s probably why I’ve got so much gray hair.”

Wife Renae Burgess knows her husband can be pretty persistent. She was working at a store that sold sports-themed items when they met. Both were students at Illinois State University. A friend of his worked there, too, she recalled. “He would come in to visit his friend at work. And then he started coming in when his friend wasn’t there.” They became a couple. She laughs, remembering a school holiday break around that time. He had shoulder surgery and she had surgery for a detached retina. “We were quite a pair after that. Him with his shoulder injury and me with an eye patch.”

The couple has three children who are now 21, 19 and 16. Joshua Burgess is a student at Florida SouthWestern State College; Connor is at Florida Gulf Coast University; and Paige is a sophomore at Gulf Coast High School. The family lives in North Naples.

Southwest Florida required some adjustment after the Chicago suburbs. Besides the difference in temperature in Arlington Heights, which averages a high of 80 degrees from June through August and a low of 13 to 17 in January and February, the average age is 40. But entering their third summer as Floridians, Renae Burgess says they are enjoying the pools and beaches as stand-ins for the Chicago-area national parks—which her husband must miss having grown up as the son of a forest ranger. (His mother worked for the courts in child support enforcement.)

“We probably don’t go to the beach nearly as often as we should,” Renae Burgess says. Spoken like a native.

Scott Burgess also appears to be acclimating. The hot lights that bear down on a new guy, particularly at a longtime community fixture like David Lawrence, don’t seem to make him uncomfortable. As for any big shoes to fill following a “pillar of the community” like Schimmel, Burgess stands pretty tall in his own size 13s.