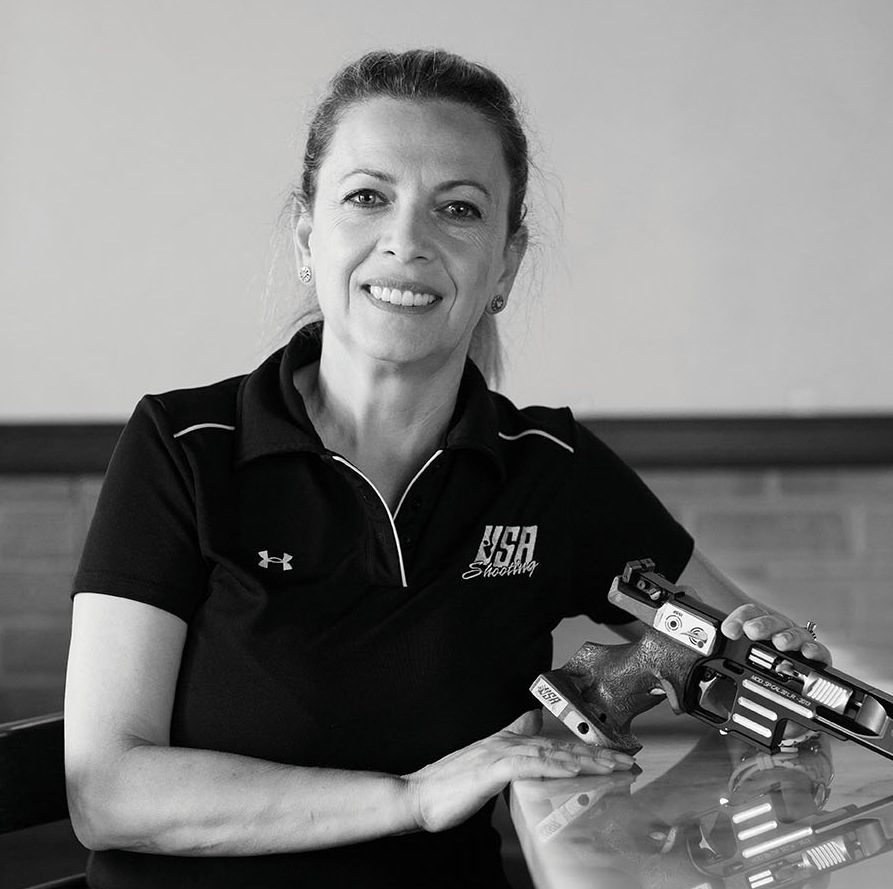 A dozen or so diners were finishing their weekly after-church breakfasts at Olympia Dining in East Naples on a late April Sunday as they spotted a slight blond woman with a wide smile emerging from the kitchen. Their applause was spontaneous and robust.

Restaurant co-owner Enkelejda Shehaj had just returned from a pistol shooting competition in Rio de Janeiro, where she qualified for the U.S. Olympic team. Shehaj—or Enka, to friends and family—smiled and blushed and clearly was pleased. But even so, it was just a taste of the kind of reception she once enjoyed, years ago, in another country. Another life.

Shehaj is a naturalized citizen who was born in Albania, a country of about 3 million people south of Montenegro, north of Greece and across the Adriatic Sea from Italy. For most of Albania’s history, it contained arguably the most oppressed and isolated people in the Northern Hemisphere. Until about two decades ago, Albanians could not own cars, practice religion or travel abroad.

But also back then, Shehaj and other young students whose test scores and grades were high were tapped for free education at the country’s one university. She attended the capital branch in her hometown of Tirana and studied literacy, learning multiple languages and becoming certified to teach.

Her first year, she joined the city shooting club. Nobody in Albania could own a gun, so even the sport pistols used in competition belonged to the club.  “Shooting is big there, but it has nothing to do with military stuff. It’s always been seen as a sport, even though I grew up in a communist country,” she says on a recent afternoon, on a break from doing restaurant paperwork.

At 17, Shehaj made the Albanian national shooting team—specializing in 10-meter air pistol and 25-meter sport pistol. By 18, she held a championship record. She believes her calm demeanor and focus allowed her to train the seven hours a day required, including four hours standing in one spot, day after day.

“My friends would go to parties, movies, and I’d have to go training,” she says. “But I wanted to. I love it.”

Although dissatisfaction with the communist government in Albania was nothing new, protests began in earnest at the university while she was a student. In fact, one of her history teachers was co-leader of the revolt against communist rule in 1991.

Albania’s government was overturned twice by 1992, the same year Shehaj competed in the Olympics in Barcelona. During the mid-’90s, widespread government-supported banking pyramid schemes swept up much individual wealth. The prime minister resigned and economic decline caused further unrest. But the earlier fall of communism meant Albanians were free to leave. And they did. In droves.

By the late ’90s, Shehaj was married and had a young daughter. She had competed in 1996 in Atlanta and was preparing to compete in her third Olympic Games in Sydney in 2000. As a professional athlete in Albania, her bills were paid and she was paid, too.

But she left her country, her marriage and her home and moved with daughter Megi Xhakaj to Michigan, where a friend’s cousin was living and an Albanian community had taken root. “I always wanted to leave Albania,” she says. “And now I thought it was time to move. Mostly for my daughter, to have a better life.” Her husband chose to stay.

She thought there must still be a way to represent Albania in the Olympics in Sydney, having qualified there. “I was still hoping. But they said no, and cut me off the salary,” Shehaj says. She was suddenly poor, unknown and unemployed. “I was a professional athlete. I never had a job in my life,” Shehaj says.

She found work in a restaurant. “I bought a mattress and a car, so I could get to my job,” Shehaj recalls. These are difficult memories. “That’s all I bought.”

“Every day when I went into that restaurant I would have a lump in my throat,” Shehaj says, putting her hand to her neck as if she could feel it still. “And I would go home and cry where Megi couldn’t see.”

It wasn’t an easy transition. Although she didn’t win Olympic medals, she had been a national hero, and then suddenly she was an emigrant to a country 100 times more populated than her native land—which plenty of her new neighbors wouldn’t have been able to find on a map—working for low wages and meeting people who struggled even to pronounce her name.

But in Michigan she met Tony Bekurti, a former professional table tennis player, singer and language interpreter who also was from the Albanian capital. In the United States, he had become a chef. “You come here and you’ve got to put food on the table, raise your kids,” he says.

The cuisine of their heritage is similar to that of Greece, and it became the foundation of a life for the couple, who married, had a child together and opened their first restaurant in Bonita Springs in 2004, after a friend introduced them to the area. Seven years later, they moved Olympia Dining to Naples.

The restaurant is so named for the city in which Shehaj also attended university and lectured, and where the Olympics were founded. Because a significant minority of Albanians are Greek, their culinary preferences are very similar. Gyros, souvlaki and feta omelets are reminders of home to Shehaj and Bekurti. But to Americans, it’s Greek food, and the name Olympia signifies that.

Olympia Dining is steps away from humble businesses like Muffler Works, So Big So Bright Preschool and Sunbelt Rentals in a small strip shopping center a good distance from the more upscale establishments of downtown Naples. But Shehaj has nothing but praise for her adopted hometown and Olympia’s loyal customers, who regularly fill the dining room.

Sometimes her sport takes some explaining. She’s been invited to go hunting, and declined. “I never owned one of those guns that you can kill someone with, or hunt,” she says. It took a while to find a place to practice shooting here. “I would go to this range in North Fort Myers and this guy behind me would have a machine (gun),” she says. But she found a suitable sport shooting range in Tampa, and one customer at the Naples restaurant has a range at home where she can practice.

To explain her sport’s intense focus and quiet precision, Shehaj plays a video of the March World Cup match in Rio de Janeiro. You can see her stepping into place in a horizontal row of competitors in the 25-meter sport pistol. All of the women, ranging from young adult to middle age, stood parallel to a row of targets. Each target bore a number matching the one pinned to the back of a shooter’s shirt. Competitors stood on concrete and fired over grass, making the range look like a patio and backyard in a suburban neighborhood. Olympic competition will be held indoors.

Shehaj sipped water from a commercial bottle as she awaited instructions from the announcer. A podium-like table in front of her held her gun and equipment. With her right foot planted in front of her left, she looked strong but serene, exuding a calm that belied the intensity of the competition.

“For the next series, load,” the announcer said in an indistinguishable accent.

And unhurriedly, she and her opponents each loaded a .22 caliber shot into their pistols. Shehaj slowly and confidently raised her gun. With her muscular right arm held straight and unwavering at a right angle from her body, her left curled around with her hand at navel height, she fired. Watching such deliberate moves, there was little sense that she—and the others—had just 3 seconds to shoot.

Scoring is complicated but ultimately depends on how many of five shots hit closest to the target.

Although most have never seen this type of match, customers are proud of her. They send text messages of encouragement when she’s competing and remain hungry for news about the upcoming Olympics. No doubt a great many will be awaiting word from the National Shooting Center in Rio when she represents this country in Olympic competition in the 25-meter pistol in early August.

She worries about being away from the restaurant and her family. But Shehaj hasn’t forgotten missing that competition in Sydney.

“When I was younger I wasn’t really aware, but I know my mom was kind of a big deal,” says Xhakaj, a student at Florida Gulf Coast University and a competitive body builder. “She has luggage at home (full) of all of her memorabilia, newspaper articles, medals, pins, pictures. Growing up, I remember always asking her to tell me stories about it or show me her suitcase and we would just reminisce.

“Presently, every time I would think about it (prior to her making the U.S. Olympic team), I still always got goose bumps or got excited and even would have an ‘I can’t believe it’ moment. My younger sister, Eni, and I always talked about how surreal it was to say our mom was an Olympian. Now that she’s made the team, I’m incredibly proud of her. She’s like Wonder Woman in the flesh. She’s a mother, a wife, an athlete, a business owner … and she’s even an employee at times when we are short and need the help. How she has found the time to do it all, I don’t know. Makes me proud though, that’s for sure.”

Although her daughters are both athletic and competitive, Shehaj acknowledges a difference in their approaches to sport. “Eni plays volleyball. I’ll say, ‘Let’s go training,’ and she’ll say, ‘But it’s Friday!’”

Shehaj’s unfinished business has no respect for weekends. It has been relentless. And finally, its time has come. “All those years it’s been inside me that I have to do one more Olympics.”