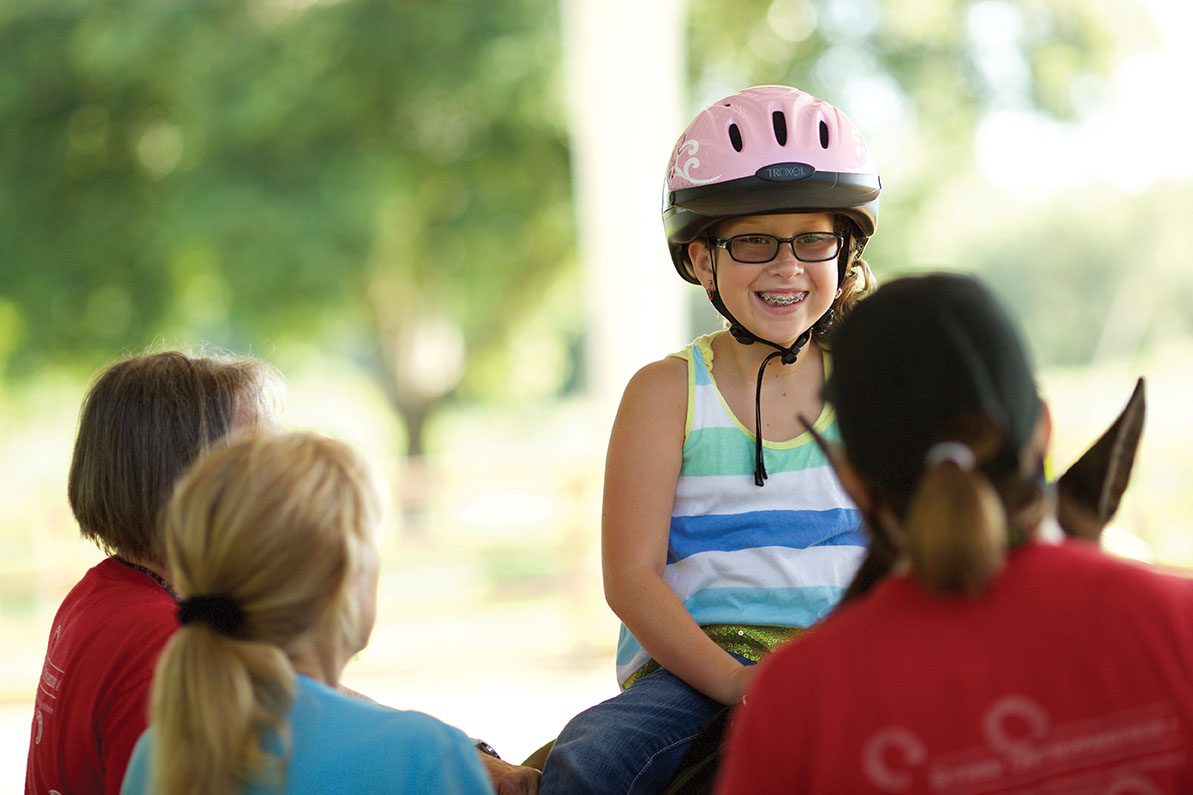 On land, Stephen Cafaro III, who was born with mild cerebral palsy, requires the use of crutches to get around. On the back of a horse, however, his legs can grip the sides of his steed, urge it into a gentle trot and enjoy an hour of unfettered movement.

Cafaro, 40, has been riding since he was 11 and his parents enrolled him in Special Equestrians Inc., hoping that riding would help his balance and coordination and offer a chance to socialize with other young riders facing physical, intellectual or emotional challenges.

“It has helped me a lot—with my back and my neck,” he says after dismounting one sultry July morning at the organization’s Buckingham facility in east Lee County. “Just being on a horse is awesome. It takes me to a whole other world.”

Special Equestrians will celebrate its 30th birthday next year, and (forgive the pun) what a ride it’s had. The group was founded with a few borrowed horses, a couple of volunteers, the support of a Kiwanis Club and the vision of its founder, Dee Hollander. It bounced around to six different farms over the next 20 years until the United Way, one of its financial backers, encouraged the group to develop a long-term plan and expand its offerings.

The Social Register
This is part of our annual guide to great causes along the Gulfshore. Also see our Nonprofit Listings and Social Calendar.

In 2007, the group moved to its 14.5-acre farm, which draws some 80 riders a week from Lee, Hendry and Charlotte counties. The youngest is 4; there is no upper age limit as long as the rider can participate safely. The program helps people with an array of disabilities, including autism, Down syndrome and developmental delays. It is a premier accredited center with the Professional Association of Therapeutic Horsemanship.

Horses have become an important tool for helping people with disabilities. To maintain balance, a rider must adjust his or her trunk, arms, shoulders and head as the animal walks. The horse’s movement prompts a rider’s body to move in a rhythmic, progressive way—a tremendous benefit for those with abnormally stiff muscles or limited muscle control. Some participants can ride independently; in other cases, volunteers guide horses on lead lines.

“On a horse, people with disabilities are more equal. It levels the playing field,” says Executive Director Jan Fifer. “The horse becomes part of their legs.”

Beyond the physical benefits, those familiar with equine therapy say the horse-human bond prompts emotional and social growth.

“I’ve seen children who never would say a word all of a sudden start talking as a result of the interaction with horses,” says Helen Cafaro, Stephen’s mother.

Kris and Scott Lehman of Cape Coral say riding has given their 9-year-old daughter Allie (right) a confidence boost, goals to work toward and something to talk about with her friends. Allie was born with spina bifida, a condition in which a baby’s spine does not develop properly. She uses a wheelchair to get around.

“She loves it,” Scott Lehman says of her weekly sessions. “It gives her a little freedom as well.”

The organization is working to get three new programs accredited and off the ground. The first is a carriage program in which a participant, seated next to an instructor, will learn to direct the horse from his or her seat. This opens up equine therapy to those whose conditions prevent them from riding. The second is targeted toward veterans, training them to work with horses—and in the process develop confidence, self-awareness, communication and trust that will evolve into improved human interactions.

And finally, Sarah Lacy, a lifelong rider and occupational therapist, is getting certified to offer hippotherapy, a type of equine therapy in which a horse’s movement is manipulated to yield a physical benefit to its rider, such as better balance, muscle development, motor skills and the like.

“It opens a new door to those who need more intense therapy services,” Lacy says.