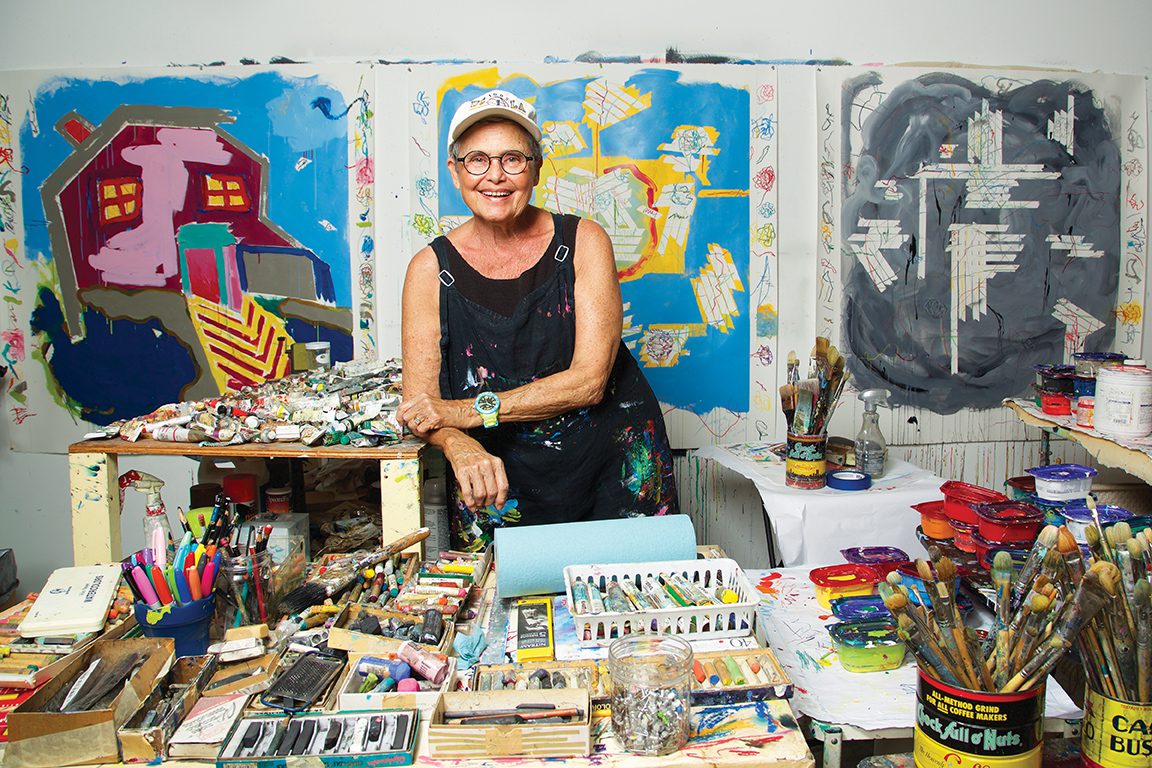 An artist’s studio can be many things—a showroom, a classroom, even a factory for art production. It can also be a pristine R&D lab or a messy but beloved sandbox where serious play happens and a single occupant makes the rules.

“All of my pure joy is right here, uninterrupted,” says Naples artist Tammra Sigler, perched on a stool in the back room of her airy, white-walled studio.

Nearby are tables heaped with hundreds of paint tubes, dozens of brushes, scads of colored markers and artist’s crayons. If an explosion were to happen here, the whole building might very well end up rainbow-spattered.

“When I’m in the studio, I just grab the joy and paint it,” the 73-year-old Baltimore native continues. “I get excited by the paint, by all these materials. I get excited by the music that I play when I’m working. My inner zest or inner joy comes out as soon as I pick up my painting materials—which I may or may not feel when I come home and have to make dinner or do the laundry or talk to someone on the phone. Sometimes when I finish painting for the day, I do other things just to stay in this space.”

That inner zest is most definitely expressed in Sigler’s recent prints, a lyrical and exuberant body of work. Each summer, she works with a master printmaker at Towson University in Maryland, when she and her husband, Dr. Arnold Sigler, a retired pediatrician, return to the Baltimore area to spend a few months with friends and family. Before moving to Naples in 2001, she was well-known in the region as an expressionistic painter. Her paintings and prints are in the collection of major institutions such as the Baltimore Museum of Art and the National Museum of Women in the Arts in Washington, D.C., as well as numerous private and corporate collections.

During a studio visit this spring, Sigler leafed through a stack of abstract monotypes that she made in the summer of 2015. They are flat-out gorgeous, full of life and color. Scribbly lines loop and twirl across the sheet of paper, and luscious shades of coral, grape, pink, tangerine, teal, turquoise and forest green shake and shimmy, as if a dance party were going on in the printmaking studio.

And in a sense, it was. Most of the prints are titled with the name of the pop song she listened to while making them. Her playlist that summer included musicians like Regina Spektor, Jason Mraz, Mumford & Sons, the Lumineers and a band that simply goes by the name of Fun. Looking at these mixed-media prints can give a viewer earworms, if you’re familiar with the songs.

“I usually don’t hear the words. It’s about the rhythm and the sound and the movement. I put the songs on a loop, so if you are the unfortunate one to be in the room, you will be hearing that song over and over again until the print is done,” Sigler explains with a smile.

Monotypes—also called monoprints—are single impressions taken from a glass or acrylic plate on which the artist has painted or drawn. They are one-of-a-kind works on paper, except when they’re not—for instance, when the artist has chosen to pull a fainter second print, called a “ghost,” from the same plate, which is something Sigler occasionally enjoys doing.

Her working process starts by drawing freely on a sheet of paper, using markers or artist’s crayons, which are fatter sticks with more permanent pigments than regular Crayolas. Sigler refers to the lines as “gesture marks.” Then she paints with oils on the plate. After that, the printer dampens the sheet of paper and carefully places it on the plate, before pressing the two together.

“And what goes on in between is serendipity,” Sigler says with a pleased look on her face. “Where things intersect and overlap.”

Her newest body of work, however, takes a more introspective turn. It’s a series of large, mixed-media paintings on a specially formulated paper, called A Very Serious Garden. This group of paintings contains somber, disturbing works as well as more lighthearted and playful efforts. In theme, they are loosely connected by the idea of home and garden, though not in a traditional sense.

Sigler made these paintings over the course of five months at the beginning of 2016, in response to an invitation to exhibit at the American University Museum in Washington, D.C. It will be a two-person show in the spring of 2017. The other artist is Sharon Wolpoff, a representational painter who lives in Maryland. Though the two are far apart stylistically, “We both really cherish color and are driven by color,” Sigler says.

In preparation for the show, the curator at American University gave Sigler one piece of advice: “Just go paint.” Needless to say, that suggestion was music to the artist’s ears.

Sigler had a few basic parameters in mind when she started, but little else. “I wanted to feel fluid in working on them. I wanted to work big. I wanted a large brushmark.” She didn’t expect to have the pieces conventionally framed, so she planned to elaborate the borders instead, to create a sense of framing. “I knew I wanted to have margins. I knew the scale that I wanted. I knew that I wanted the paint to drip. But other than that, I didn’t know what I wanted to do.”

She decided to use house paint, for its combination of liquidity and opacity. That choice gave the resulting works a raw, impassioned quality. Some areas are loosely brushed; others are heavily worked, painted and repainted. Her unruly lines and squiggles animate the surfaces, sometimes resolving into the shapes of blooms and seeds.

With this series, Sigler says, she relished the opportunity to ignore commercial imperatives. “What I love about this work is that it will be in a museum. It’s not for sale. I don’t have to worry about anyone liking it or anyone buying it. It was like this private romance. And that’s what painting should be.”

As she worked on the Serious Garden series, Sigler found herself increasingly intrigued by the visual possibilities of drawing with tape. She began each work by reeling off masking tape to establish her borders, and then making gestural marks all over the paper with her crayons.

“I play music and draw on the surface. It’s like a warm-up exercise. I basically dance on the surface until there’s some kind of rhythm going on,” she notes. Then, she’d pick up her tape and use it to create shapes on the paper that would remain untouched, more or less, by the paint. Sometimes, the shapes resemble grids or cellular structures. After applying paint, she’d let the sheet of paper dry for a day or two before removing the tape. “When I take the tape off, it’s really exciting. Where the tape was, it’s a strong white. I pick up my crayons and start to work on the borders,” she says.

With A Very Serious Garden—Night Rain, the second painting in the series, Sigler was fascinated by the strips of tape she pulled off the painting and its predecessor. The tape was colored and patterned in unique ways from the paint that had washed over it. “The tape was beautiful! I stuck it on the wall and let it dry,” she recalls.

Eventually, she brushed the tape strips with a clear coating and began to affix them to the surface of Night Rain, using fluorescent stickies. She loved the effect. The multihued strips cascade over the painting’s surface, adding a dimensional element that is concrete and conceptual at the same time. The painting’s overall tonality is dark, but the taped embellishments add rich bursts of color and patterning that balance the black and grayish areas.

“Artists are the original recyclers. Nothing is trash. Everything has possibilities. You just don’t always know what they are at the moment!”  Sigler laughs.

This improvisational approach is at the heart of her creative process. Sigler believes in “letting paint happen.” She embraces imperfection, accidents and “the little uninvited moments that no one expects,” she notes.

“When I step up to the canvas, I make a mark … and then another … and another,” she writes in an artist’s statement. “I let the marks create their own journey on the surface—weaving, constructing and interacting until patterns and relationships begin to speak to one another and to me. I play and talk to the canvas with my brush. It speaks back. If I listen carefully, I learn what my paintings are about.”

This intuitive, layered, call-and-response process has served her well over a career that now spans five decades, since her graduation in 1965 from the Maryland Institute College of Art with honors in painting. Over the years, Sigler has painted many subjects, ranging from dogs, food, flowers and toys to portrait heads, human figures and not-so-still lifes. Regardless of whether she paints what she sees in front of her or what is in her mind’s eye, Sigler’s art hums with vibrant energy, vivid color and an emotional charge that makes it compelling.

Janice T. Paine is program manager for arts education at the United Arts Council of Collier County in Naples and a freelance writer on art.