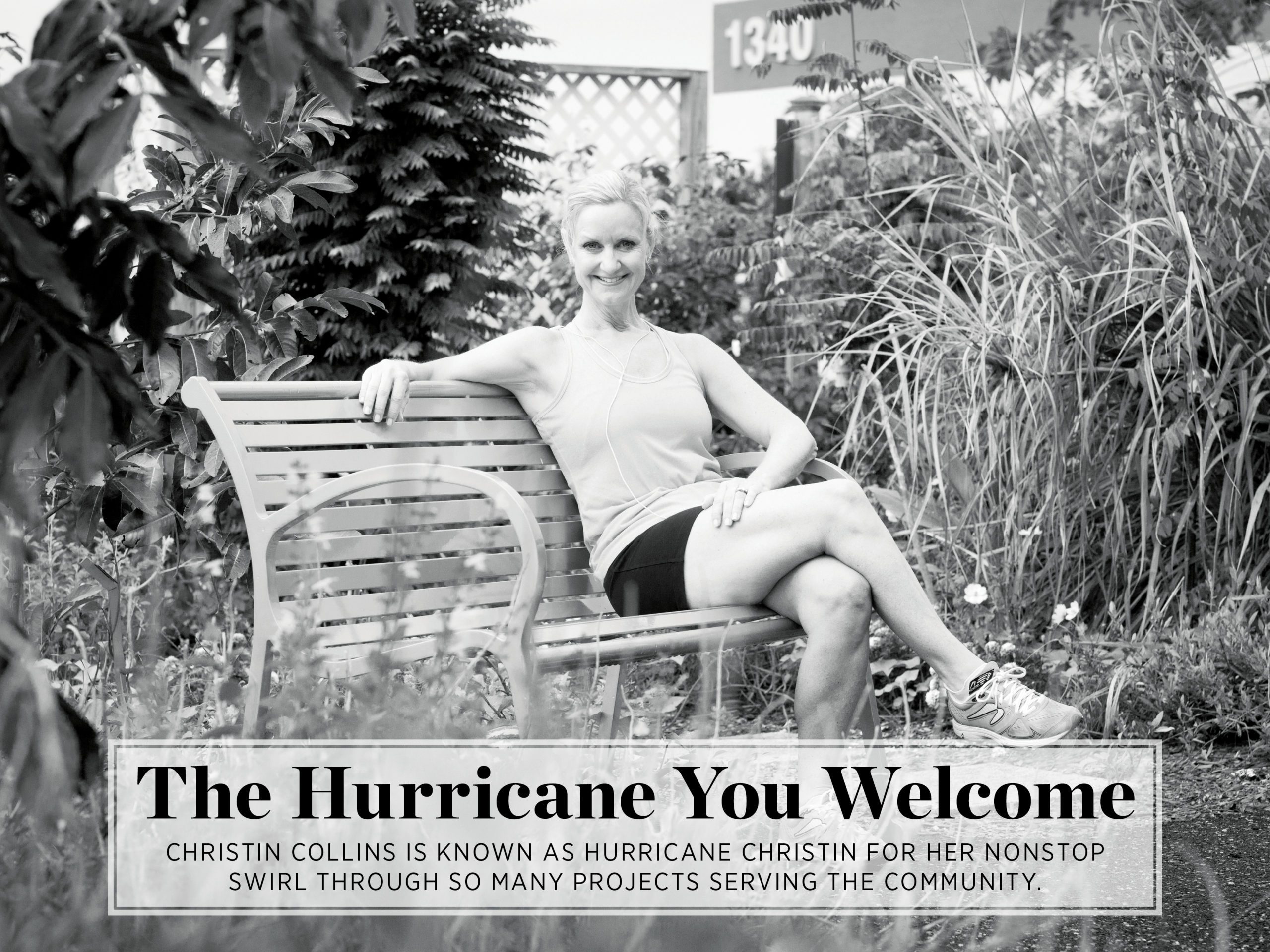 If Christin Collins had a slogan, it would be, “How can I serve you?”

Her day job has her pinging around region, state and country as the System Health and Wellness Strategic Business Partner for Lee Health (more on that title later). This particular day in mid-July, she’s put on a second hat of co-chair for the 2017 Southwest Florida Wine & Food Fest. Tonight she’ll collaborate with community groundbreakers through the fundraising group she founded, Impact Initiative. Earlier in the week she was in Collier County, organizing local efforts for the Florida Greenways & Trails Foundation. She’s fresh off a trip to New Orleans, where she was attending a conference as board director for the Women’s Foundation of Southwest Florida. She is also a board director for the Fort Myers Chamber of Commerce; a member of the Healthy Lee Coalition and of Rotary South; a supporter of the American Heart Association and PACE Center for Girls Lee County. Not to mention her private life as wife to David Collins and stepmom of 17 years to Brendan, 24, and Meghan, 22. Phew—it makes you tired just thinking about it all.

Her little downtime doesn’t exactly sound restful, either. That same busy week in July she traveled to Connecticut to see family; the next found her in both Tampa and West Palm to see her 43rd, 44th and 45th concert by the Dave Matthews Band; she runs 5Ks and does triathlons for fun. But such is the schedule of someone who literally wants to bounce out of bed.

Collins credits some pivotal moments for making her the type of person known as much for her unrelenting efficiency as for her heavy use of exclamation points. Perhaps the biggest moment came right out of college, at just 22.

What began as a routine exam aroused suspicion and led to exploratory surgery at Yale New Haven Hospital, and when she awoke she was delivered some stunning news: She had ovarian cancer, and her ovaries had just been removed.

She spent her 11 days recovering in a hospital bed wondering not why she was sick but why she was saved. She had had no symptoms from the tumor the size of a grapefruit. To her, the discovery was no accident. It was a spur to live life fully. Otherwise, she says, “Why bother?”

“Every day I wake up I’m like, ‘So, we’re still here! What do you want to do?’” she says, adding: “And why not choose the glass being really full, never mind half-full?”

She flipped what she calls a “selfish” young adulthood on its head and adopted the mindset, her husband says, of giving till it hurts.

If you’re wondering how she came to spend 40-plus hours of every week giving on behalf of Lee Health, that’s because of pivotal moment No. 2. In 2012, when she was raising funds for Golisano Children’s Hospital as senior director of development for the foudation at Lee Health (then called Lee Memorial Health System), she met Cape Coral Hospital CAO Scott Kashman over coffee. He wanted help executing his plan for an “optimal healing environment” within the hospital, and when he explained his concept—a framework that would allow for cohesion of patient, staff and community—she was sold.

Newly immersed in engaging others on the importance of prevention, an already active Collins took a hard look at her own health. She reevaluated her diet, incorporated rest, added yoga. Gone were years of unexplained crashes of fatigue, migraines, digestive issues. She’s now up at 4:30 every day, good on six hours of sleep. The breakthrough made her “evangelistic about wellness.” Pair that passion with a region ripe for healthy living and you have her current lengthy title, which since 2015 has had her executing a broader initiative of bridging the public and the health system as a whole.

The personal and professional turning points created a core force in Collins: the ability—and desire—to connect.

Collins has always had a lot going on, her husband says. So much and at such a high intensity that when the two first started dating, he nicknamed her “Hurricane Christin.”

Just what does the resume of a hurricane look like? The Connecticut native has held many a title since “varsity cheerleading captain” at UConn, the first being “teacher”—seventh grade history, in her old middle school. But a layoff and the pull of the wide world led her next to become a flight attendant. Those 13 years taught her how to find resolve in uncomfortable situations, how to bond with people rapidly.

Even while traversing the globe she wanted more: At one point, she was working as an aerobics instructor when she wasn’t in the air; at another, as a real estate agent, borrowing hotel fax machines after landing in her port.

Looking to stay home more with her family, she eventually transitioned fully to real estate in Southwest Florida. On days off she would help out her friends Norman and Mary Love as their Norman Love Confections was getting off the ground, and when her real estate business plummeted in the recession, she became their corporate sales director. There, connecting donated product with nonprofits, she came to see every relationship as a win-win partnership.

All the while she spun her energy into philanthropy personally as well, taking bags of clothing to poor areas of the world she flew to; volunteering with her stepchildren at the soup kitchen; joining nonprofit boards. Said nonprofits have been the breeding grounds for some of her best big ideas. Take PACE Center for Girls, where she served six years as a board director. In 2009, Collins took a $35 red dress and network of friends and grew it to $35,000 for the organization—that year alone—and their signature fundraiser, Love That Dress.

When Collins realized she could actually get paid to fundraise as she was doing as a volunteer, she decided to make that kind of difference full-time. Thus began her position with the foundation at Lee Health, which lasted five years until that fateful meeting with Kashman. And that brings us to the whirlwind of today.

Sipping on just her second cup of coffee in four months—you should know by now she doesn’t need the caffeine—Collins makes a confession: Most of her emails are checked on her phone at stoplights.

Her desk chair typically empty, she’s on the go often to spread health awareness and education to clinicians, business leaders, nonprofit officers, representatives of gated communities, heads of churches. On a micro level, she’s spending upwards of an hour with individuals, “trying to peel the onion” to get to their underlying motivations. On a macro level, she’s landing top-notch national speakers for audiences of more than 1,000. Somewhere in between are partners like the American Heart Association, with whom she’s pushing to children a daily wellness pledge.

“Every day is different. Today, by the way, happens to be fabulous. I mean, it’s hilarious what I get to do, how lucky I am.” That’s not her sarcastic brand of humor talking. “I get to meet incredibly interesting people, I brainstorm ideas with them, I support their work. I’m not operational, so I’m not going to brainstorm the idea with you and then deploy it; I’m going to brainstorm the idea with you or help support what you’re doing, and then connect you.”

Bingo: “connect.” Aside from the job she’s paid to do, all Collins’ projects are benefiting from her trademark knack for linking people, ideas, information, you name it. For the Southwest Florida Wine & Food Fest alone, it’s resulting in new secondary venues, attendees and funding. And it’s no doubt going to help them implement her even bigger contribution.

She persuaded the board of the country’s fourth-top-grossing wine fest to change the course of dispersal for its $1 million Fund a Need, to mental and behavioral health.

In the worst county of the nation’s 49th state for such services, Collins says, that’s big.

“When I left that meeting, I called my boss so fast,” Collins says. “I was like, ‘Are you ready to change the direction of this region? Because we just did.’”

And you can’t talk of Collins being the center of many spokes without mentioning her star-studded Impact Initiative.

“People are naturally drawn to Christin Collins. I’m not kidding you. If you ever saw her speak or just be in any special environment, people adore her.”—Debbie Toler

When Collins worked for the foundation at Lee Health, she got 19 women together to brainstorm: How can people who aren’t major gift donors to the children’s hospital get more involved? Together they came up with 250 leading women who could pledge $250 toward the hospital—which, with the matching grant then in place, would mean they’d ultimately be worth $125,000. They met their goal (of course) and have since opened the collective giving society to men and aided other causes.

She’s constantly emailing the membership to celebrate them, provide them news bits, give them ideas for growth. She puzzles together seating assignments for their gatherings, thinking hard of who would benefit from whom. Not just anybody has the magnetic spirit that can unite such distinguished people time after time.

“People are naturally drawn to Christin Collins,” says Debbie Toler, Collins’ co-chair of the wine festival. “I’m not kidding you. If you ever saw her speak or just be in any special environment, people adore her.”

Kashman even has photo of it. When he saw big-time biochemist Dr. T. Colin Campbell, author of hugely influential nutrition book The China Study, seated next to a barefoot Collins on her couch and listening to her so raptly you could see it in his body language, Kashman actually stopped to document the moment.

“Sheryl Sandberg focused on women and girls being empowered and leaning in,” he says, citing the book Lean In by the Facebook COO. “But this, to me … was about the importance of all of us leaning in. Of listening to each other.”

Collins listens almost stubbornly. She’s looking for a problem to solve, a hidden passion to unearth. (Like when talking with a prospective donor to Lee Health led Collins to give her a tour at PACE and help her become a donor there instead.) Any way to deepen your connection.

She makes the giving till it hurts look easy.

Perhaps an even better analogy for Hurricane Christin is a more recent one from her husband: a lighthouse.

“She’s more of that beacon out there that’s saying, ‘Hey, ‘I’m here if you need help. I can help you,’” he says. “She just wants to share what she’s learned.”