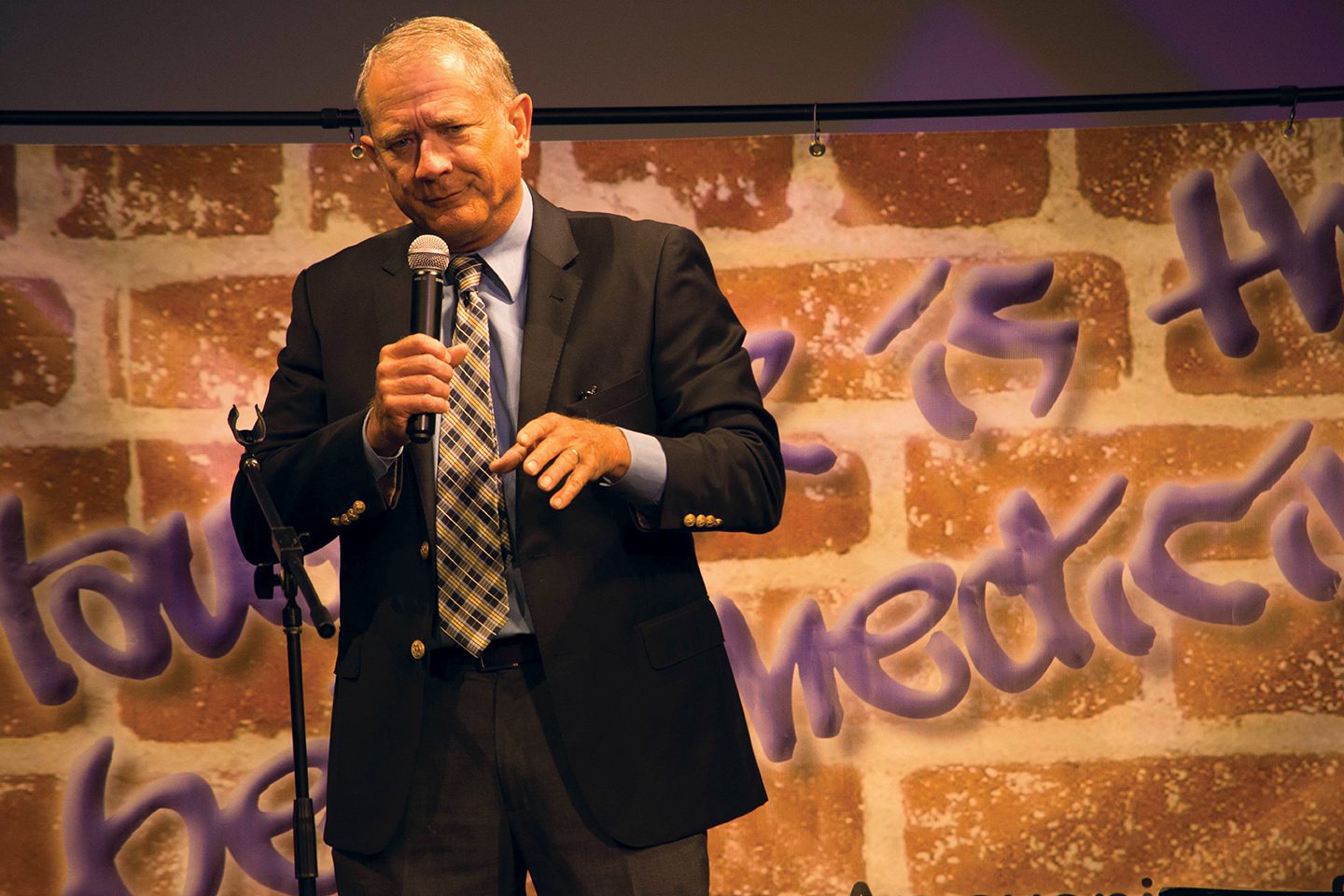 Tell us if you’ve heard this one before.

A Fort Myers personal injury attorney decides to try his luck at stand-up comedy. He starts out small at first, moonlighting for free at community cultural events and volunteering for area nonprofits. He even scores a gig at a comedy club, opening for a professional comic. Soon, his reputation as a local funnyman starts to grow, and he finds himself increasingly in demand.

That’s when it suddenly seems as if Thomas Chase isn’t joking around anymore.

But those who know Chase insist the wait won’t be quite so long.

“He has a way of telling stories and talking and sharing information in a way that’s just delightful,” explains Samira Beckwith, CEO of Hope Healthcare Services in Lee County, where Chase has volunteered for the past several years. “He’s a real Southwest Florida treasure.”

Chase’s path to comedy began early. A Florida native, he grew up in Plant City, where he established himself as a young classroom cut-up. In the fifth grade, he and a friend performed a skit for their fellow students, one that left everyone—including their teacher—in stitches.

“She laughed so hard, her mascara was running down her face,” Chase recalls. “And I’ve been pretty much a pain in the neck ever since.”

In high school, he continued to perform, joining the cast of the classic cross-dressing farce Charley’s Aunt. Later, he went on to earn a Bachelor of Arts from the University of Florida in Gainesville and a law degree from the Nova University Center for the Study of Law in Fort Lauderdale. With his Sigma Chi fraternity, he also planned and performed skits.

By the time he arrived in Fort Myers in 1980 and began practicing law, his creative direction had shifted, and Chase was writing poetry, something he still does. He also began to get serious about his “storytelling,” which is how he refers to his comedy approach. Rather than stand before a crowd and toss off a bunch of witty one-liners, Chase often relies on his gift for impersonation, drawing inspiration for his original material from sources such as movies, television and pop culture.

“I love to make fun of any ad, anything that seems a little over the top,” Chase says.

One of his most riotous routines is a riff on the television commercials for a certain big-name Florida personal injury lawyer. Portraying “Don Dorgan” from “Dorgan & Dorgan,” Chase describes his feelings toward the legal profession and his valued clients, and how they bring to mind a slightly risqué 1990s pop song by the Divinyls. The bit always brings down the house, but Chase promises there’s no harm meant toward the attorney who inspired it.

“They’ve done a lot of wonderful things,” he says of the law firm, which shall remain nameless. “But some things just invite parody.”

And while Chase might poke a bit of gentle fun at the marketing tactics of his fellow legal professionals, don’t ask him to tell any actual lawyer jokes.

“I actually don’t even like lawyer jokes,” he admits. “I was a good sport about lawyer jokes for about 25 years. And then someone told me one that was really hateful to our whole profession.”

He’s also relied on classic comedy routines—such as Andy Griffith’s famous monologue “What it was, was football”—to bring a smile to the face of his audiences. That piece has proved popular when he volunteers at Hope Healthcare Services, which includes Hope Hospice and Hope PACE. Chase has a personal connection to Hope Healthcare through his mother, Nadine, and father, Fred, who received hospice care through the nonprofit. Chase is also a volunteer at the Quality Life Center in Fort Myers.

“It’s an outlet,” he says of his volunteer work. “It’s a way of giving back.”

Beckwith says Chase’s volunteer contributions are invaluable, not only because they help to lift the spirits of those who are in Hope’s care, but also because they support the goals of the organization. She notes there are ample studies to show that laughter can help patients feel less pain, be more comfortable, and to report a better quality of life.

Simply because a person is receiving end-of-life care doesn’t mean they can’t or shouldn’t enjoy their remaining time, Beckwith adds.

“He gives of himself,” Beckwith says of Chase. “A lot of people don’t know what they can give, but he knows what his gift is, and he shares it with us.”

Chase concedes he does use that gift to get an occasional chuckle in the courtroom, too. Most of the individuals he has met in his 36 years of practicing personal injury law have been “regular folks, caught in bad circumstances,” he says, and a joke here and there can sometimes provide a release when emotions are running high.

“Invariably, something happens in the course of the case that I want to get a laugh out of them, because it breaks the tension,” Chase says. “I find that it humanizes you.”

With his comedy star on the rise, Chase is making more appearances where he finds himself center stage. He recently performed at the annual SalusCare Comedy Night Fundraiser at the Sidney & Berne Davis Art Center. Next up, he will take the microphone as the entertainment at the Southwest Florida Historical Society’s February “Cracker Dinner” fundraiser event.

Where the humor takes him next, he’s not sure. One dream is to start a video blog with his two sons, David and Bryant, who take after their jokester dad.