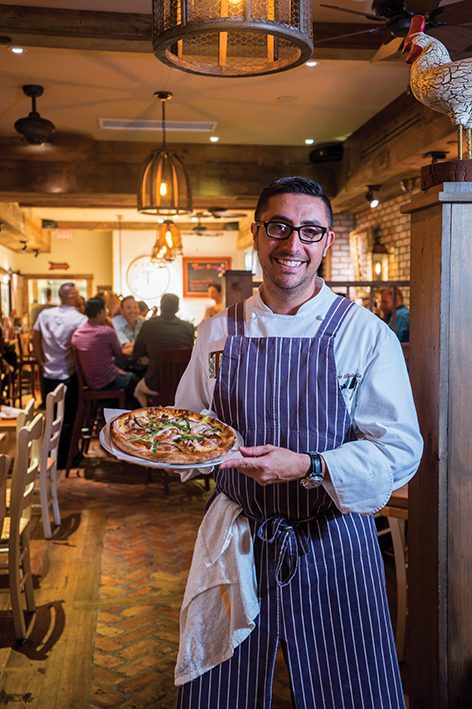 Some might call it fate. Others, a striking coincidence. But there’s no debating Vincenzo Betulia has a great story behind the beginnings of his restaurant coming soon to Old Naples, The French Brasserie Rustique.

“One day when I was walking down Fifth when I first moved here, I had a disposable camera in my hand. Even back then, I always had it in my mind that I wanted my own restaurant. I took a picture of that building and courtyard—it wasn’t even a restaurant, but the space was beautiful,” Betulia says.

Fast-forward 16 years, and the timing was right for Betulia to sign a lease for 365 Fifth Ave. S. A lot has changed since he moved here for a job at Campiello. Opening in December, this homage to a Parisian brasserie—down to the red banquettes and white mosaic tiles covering the floor—is Betulia’s third foray in downtown dining, joining his immensely successful Osteria Tulia and Bar Tulia (pictured, at left). Both of those serve his brand of rustic Italian fare, and he’s envisioning the same authentic approach at The French but with staples like steak frites, cassoulet and coq au vin.

But why French and why now for a chef who wears his Sicilian roots like a badge of honor? “In the repertoire of cuisine, everything is written in French. In culinary school, you’re trained in French cuisine and technique,” he says. “When I worked with my mentor, Paul Bartolotta, a two-time James Beard winner, I started at his Italian restaurant, and when he expanded and opened a bistro, I worked there. In some regards, I’m following in his footsteps.”

Betulia’s cautious with the distinction between bistro and brasserie, the latter typically larger, louder and with a printed menu alongside plats du jour. He’s also acutely aware that diners don’t just eat. “For me, it’s not only cuisine but the experience, a jovial atmosphere, a relaxed setting,” he says. “We want it to be fun.”

The Coupe, 3883 Tamiami Trail E., Naples, 239-228-5921, thecoupefl.com. When the rooster crows, head to this large daily brunch spot with WiFi and extra-large omelets and sandwiches.

New York Pizza & Pasta, 8855 Immokalee Road, Naples, 239-597-3800, newyorkpp.com. The original along with this new location further east are go-tos for delivery, take-out and dining in.

Flat Top Larry’s, 2122 First St., Fort Myers, 239-332-2000, flattoplarrys.com. An old-school diner open for breakfast and lunch on weekdays and around the clock on weekends with daring food, like red velvet waffles and spiked root beer floats.

Brooks Gourmet Burgers & Dogs, 845 Vanderbilt Beach Road, Naples, brooksburgers.com. Adding to the ongoing revitalization of the Pavilion across from Mercato is an additional locale of our nationally known burger joint.

Danger, Danger, 1017 Cape Coral Parkway, Cape Coral. This sliver of an eatery with 16 seats will focus on haute take-out and delivery; it’s a collaboration from the owners of Nice Guys and Nevermind (think: flatbreads, local whole fried chickens and burgers).

Brooklyn Dough with a Hole, 395 Third Ave. N., Naples. A New York bagel master is relocating to Naples with 25 recipes for the breakfast treat.

The Oyster Society, 599 S. Collier Blvd., Unit 218, Marco Island, 239-394-3474, theoystersociety.com. The family behind DaVinci’s and Marco Prime is adding an upscale raw bar and seafood spot to the mix.

The Warehouse, 9010 Bellaire Bay Drive, Naples, thewarehousenaples.com. Craft cocktails and modern cuisine will be hallmarks of this new structure being built in Cameron Commons.

Habitat Gastronomy on the Creek, Bayshore Drive, Naples. The owner of Three60 Market has purchased land across from it to build a park with permanent gourmet food truck-style vendors.

Seed to Table, 4835 Immokalee Road, Naples, oakesfarms.com. The highly regarded team behind Oakes Farms plans to open a retail store and café that is larger but closely in-line with its organic Food & Thought market (which is also remodeling and expanding this season).