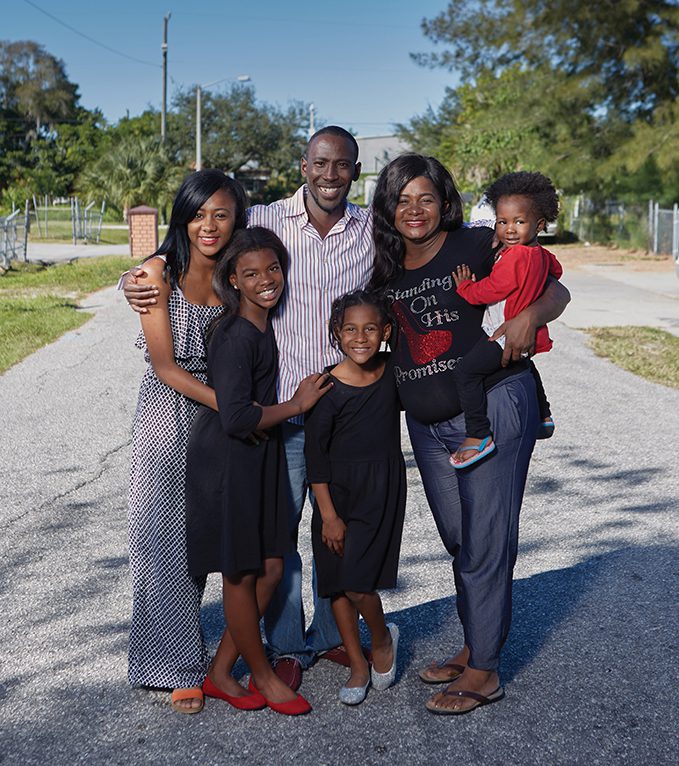 Olivia Walker detects the vibe right away one evening, watching her Diamonds in the Rough regulars trickle into their meeting room with less-than-typical enthusiasm.

“Who had a bad day today?” she asks. Hands shoot up. “There are some heavy hearts,” Olivia acknowledges. She seeks out her daughter, Jalexis Eason.

“Lexi, will you lead us in prayer?”

Jalexis, a petite high school senior, bows her head. “Father God, we thank you for this day. … We ask that you touch somebody tonight. We pray that they leave here with a little bit of joy.”

The air clears, as it often does during these mentoring sessions, where girls and young women learn to build faith and dismantle obstacles. (See our previous story, Transforming Fort Myers’ Most Dangerous Street.)

Olivia and Jalexis know a lot about those.

Before they could collaborate on this project, or offer an example of mother-daughter unity, or become a surrogate mom and sister, the two had to reconcile.

“I just didn’t know how to be a mommy,” Olivia admits.

Here’s how one mother and daughter—along with a husband and sisters—pulled together and are trying to inspire others to do the same.

“Lexi was 14 months old when I first got into trouble,” Olivia begins. Olivia had a temper and a swagger born out of Miami’s notorious Overtown neighborhood. It landed her in prison at age 19 following back-to-back arrests for assault. Jalexis went to the care of Olivia’s mother.

“What was I thinking?” Olivia remembers wondering. “I left my baby out there.”

Looking for Hope in Dunbar

She was released three years later and collected her child against her mother’s objections. “I am raising my daughter, and nobody else,” she asserted.

Jalexis doesn’t remember much of those years—a good thing, her mother thinks. She recalls starting school without incident and proving to be a good student. Her mother praised her academic accomplishments and showed up for school events.

“She was always there,” Jalexis says. It was, for Olivia, a way of repudiating her own childhood of neglect.

But growing up in an angry and abusive home leaves deep wounds. Outwardly, Olivia provided Jalexis the essentials; inwardly, she favored her emotional needs over those of her child.

Her spiritual parents—a couple who had introduced Olivia to faith and family—saw the fraying mother (who had three daughters by then), and offered help.

“I knew this was my last chance,” Olivia says. “If I didn’t make that decision then, I would have ruined their lives. … That was it. No more clubbing, no more uncontrollable drinking, no more drugs, no more men, that’s it.”

Lexi was 11. The hard work was just starting.

These days, you’ll find Olivia and her girls in a handsome, single-family home in Dunbar. The family has grown to include Olivia’s husband of four years, Erick (who had renounced a similarly troubled past), the couple’s 2-year-old, and another daughter on the way. The family prays together, has meals together, works together on Diamonds in the Rough and Erick’s Transformers Club. As of mid November, Jalexis had been accepted to two colleges. She’s considering law school eventually.

Olivia worries that her early impatience rendered her daughter unable to fully express her emotions. Jalexis isn’t sure she agrees with that. She does, however, admit to a few rebellious years, now over.

Still, a couple of months ago, they faced an uncomfortable realization. It happened after a Diamonds session in which Olivia, lecturing on anger, realized she harbored resentment toward her daughter. She had seen Jalexis bonding with a friend’s mother while sensing a wedge growing between them. Lexi, unbeknownst to her, was experiencing similar feelings, watching her mother’s relationship with neighborhood girls deepen.

“I pray you can again forgive me, but some things have to be said,” Olivia wrote to her daughter.

Her daughter replied she was “praying for God to mend” the strain between them.

It wasn’t the first time the family has dealt with conflicts between family needs and community ones; the mothers of Erick Walker’s sons once accused him of neglecting his obligations as he nurtured his new family and ministry. The situation was complicated, he said, but he acknowledged the need to make things right.

It all comes down to honesty, the family says.

“You have to want (the relationship), and you have to be completely honest with the way you feel,” Jalexis says. “If you’re not honest … things are never gonna get right. You can’t say to your mom, ‘Oh, it’s nothing you’ve done,’ when deep down inside you’re holding on to other thoughts.”