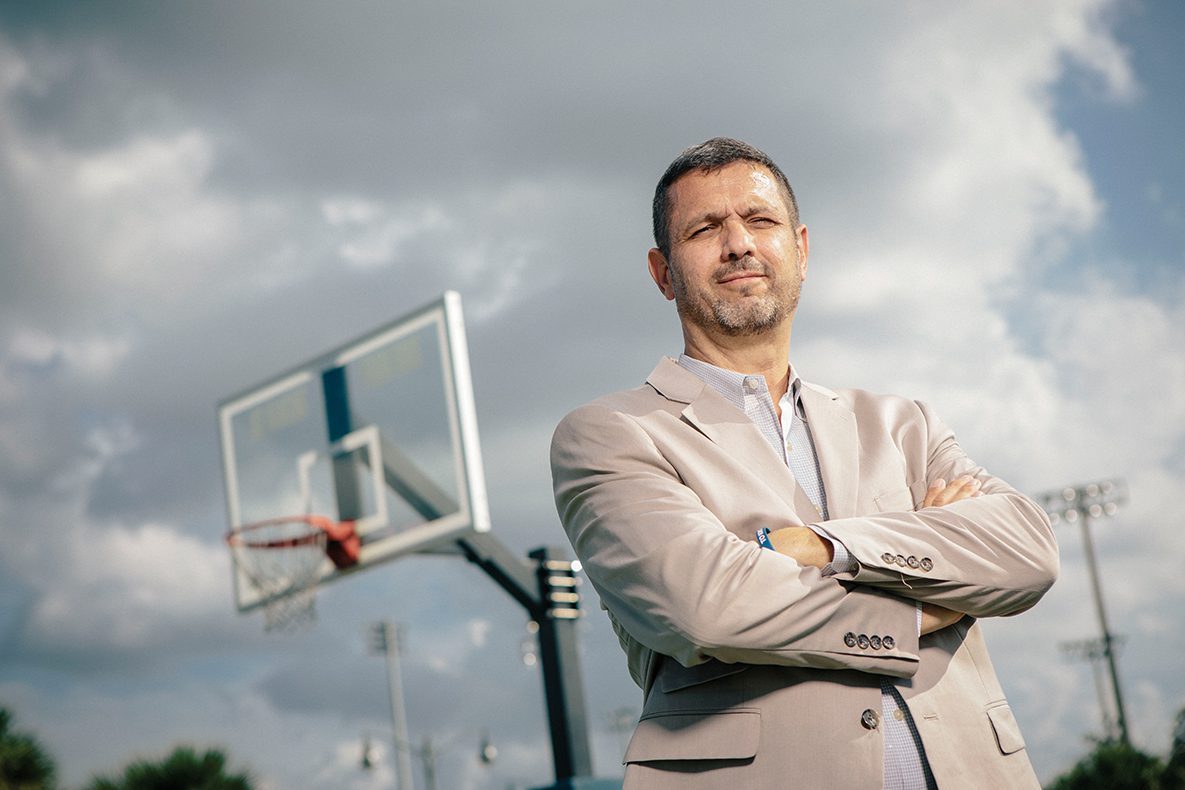 If you were to conjure an image of the ideal young man—respectful, well-dressed, mature—the members of Pickup the Ball made him come to life one afternoon in late December 2015.

Most wore khakis and polo shirts. Their cellphones were silenced and out of sight. A group from Lifeline Family Center, a home for pregnant and parenting young mothers, had joined them for a roundtable discussion. The conversation was both supportive and brutally honest.

“What about loyalty?” demanded one girl, who’d been shattered by broken promises.

Looking for Hope in Dunbar

“Boys mess girls up,” agreed Tonio Bridley, who was 24 at the time and newly engaged. “Now it’s come to the point where females think there’s no good men in the world. And it’s not true.”

One of the Lifeline directors cuts to the core: “How do you influence your generation so that the cycle doesn’t continue?”

That quest is at the heart of Pickup the Ball’s mission.

I was introduced to the group in late summer 2015, a few months after its founder, Ted Sottong, had sold his architectural firm in order to expand his part-time organization into a full-time endeavor. A longtime mentor and volunteer, he wanted to offer Dunbar’s teens a chance to experience the kind of opportunities he’d enjoyed growing up with parents who taught him to work hard and dream big. It was, he says, God’s calling.

“They think whatever is in arm’s reach is what (they’re) going to be able to attain. … The concept of looking out beyond here—it doesn’t seem realistic for them,” he explains one afternoon. “In areas of high poverty, you’re just working to make ends meet. You’re not living a fulfilled life where your career is your passion. The image they get of adults is just work and drudgery and misery. I want to introduce them to people who are pursuing their passions.”

Basketball provides a foundation, but Pickup tackles numerous issues: dating and relationships; jobs, college and goal-setting; trust-building with law enforcement among them. Ted has taken his members on visits to colleges, to nearby cities, to Haiti, even, on a mission trip.

“It’s giving us an eye-opener that we can be whatever,” Sabrina Bouie, 21, told me several months after Ted took the organization full-time. “Ted is helping all of us—if we need a job or community service hours or whatever. He’s got so many hookups.”

In my periodic visits, I saw both moments of advancement and of regression. There were experiences like the Lifeline visit and the candid conversations with Lee County Sheriff deputies, an effort to crack the wall of distrust. But then came other instances, in which they sunk into self-defeating behaviors—cockiness, narrow-mindedness, apathy.

“You guys are insisting you want to stay as ignorant as you have always been,” Ted railed one night. He’d taken about a dozen young men to Florida Gulf Coast University’s Institute of Entrepreneurship, an effort to teach them how to conceive, develop and run small businesses. The students were unfocused, inattentive, unimaginative.

The intentions are good. The results are mixed.

Every mentorship group has its dynamics. Pickup’s are complex. Ted is white, middle-class, 50 years old and, he admits, a bit of a “pushover”; his members are universally poor, nearly all black, in their teens and early 20s, and streetwise.

“Sometimes I feel like I’m asking you to change and that’s kind of offensive to you,” Ted addressed them one night. “What I’m asking you to do is make the choices that will set you up for success in the future.”

But I don’t think the group’s jagged progress has anything to do with race. Pickup’s story merely exemplifies a truth: Change is gradual, and signs of it are sometimes obscure.

“There are times I look at it all, and I think I’m not doing any good, that I should just bag it,” Ted confessed a couple of months ago. “And the thing that always brings me back is a personal interaction with one of the guys, when they just say something that let’s me know there’s something that has made a difference for them.”

“We’ll play basketball, we’ll go to all these meetings and nobody takes anything from it,” complained Shaun Sparks, 20, a regular attendee. “Me, I take everything … and I’ll use it to my advantage.”

The group teetered last August at its 2016-17 kickoff meeting. A guest speaker, a former FGCU basketball player, captured members’ interest; Ted’s long-term planning efforts did not. “The organization will evaporate if you don’t want to be here,” he warned.

But as the holidays approached, Ted’s outlook shifted.

It was time, he said, to recruit other mentors who could offer different skills and different perspectives. Time to shed the initiatives that didn’t work (anything in a classroom, he notes wryly) and focus on those having the biggest impact. And, most critically, time to push the members into leadership positions, where they could reach other young people and steer the fate of their community.

He’d been reflecting on the Biblical tale of Nehemiah, who had led the Jews to rebuild Jerusalem. The city had been in ruins for so long that its youth knew nothing but chaos.

“I think they know (their surroundings are) dysfunctional, but they’ve learned to adapt. They work with it. Trying to convince them to rebuild is a pretty big job that I thought would be easier because I wasn’t looking at it that way. I thought everybody was ready for change.”

He adds: “I look back on my childhood, and my dad told me stuff that I didn’t listen to, but that’s the same advice I’m giving other people. Some of the things I’m telling them they might not listen to, but they might feed it to their kids and instill in them a different set of standards.”

I wish Ted had overheard my exchanges with Shaun. The young man works full-time, but his passion is helping kids through Pickup and other nonprofits. “I’ll do anything to make sure they had more than I had,” he told me. Watching leaders like Ted and participating in community activities, he said, is making him a more effective mentor.

“It’s just furthering my experience,” Shaun said. In the backseat of his car is his own son, chattering in toddler-speak, the unknowing beneficiary of a slow and steady effort toward rebuilding a community.