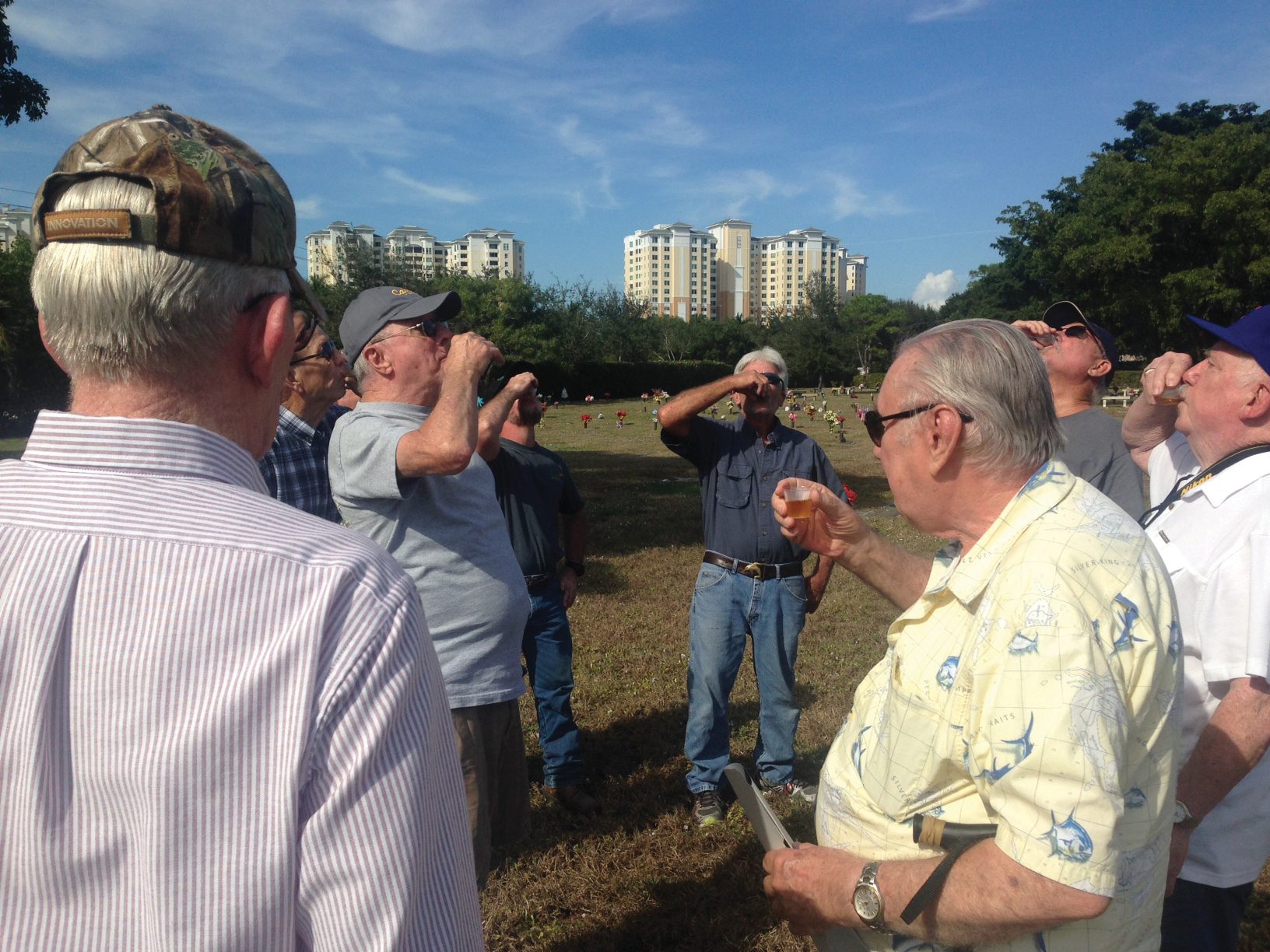 Richard Beatty likes his Old Overholt cold. The 77-year-old’s cooler rattles with a bottle of 80-proof whiskey as he makes his way to Lester Piper’s grave at Naples Memorial Gardens. Behind him is Ralph Curtis, who at 84 is the elder of this group of former Everglades Wonder Gardens guides who gather annually at the site to celebrate Lester’s Dec. 13 birthday with a shot or two of whiskey.

Lester and his brother, Bill Piper, started the Bonita Springs reptile attraction in 1936. Lester died in 1992 at the age of 89. He drank his whiskey with 7UP, at the end of day once the animals were fed, the men recall.

Hearing these 10 men reminisce, it’s clear that, at the gardens, under Lester’s rough-hewn tutelage, they tested their own stock. They hunted snakes; waded chest-deep in the Everglades; fed bears, gators and crocodiles; and survived wild animal bites.

Frank Liles, 73, shares the story of the gash on his right thumb. They gave the otters burlap bags to dry themselves. One morning, Frank went back for a bag and found a mama otter and baby inside it. She bit hard.

Lester considered Frank’s bleeding thumb. Anybody who’s stupid enough to do that can take care of himself.

“He might curse you out,” Liles says, “but he treated you right.”

And he treated the animals right. He talked rough, the men agreed, but Lester was a good man. A legend. Kenny Morrison, 65, started the whiskey tradition. But the group of Lester admirers has grown over the past decade or so.

“He was the most grounded person to the earth,” Morrison says. “Time was something that lasted the day you got up. He didn’t worry about next week or last week or anything. He was just so unique. All of us couldn’t help but to love him.”

Early in the afternoon of Dec. 13, the men meander past a handsome sausage tree they imagine Lester would appreciate and toward the plot he shares with his wife.

Beatty tells of a time Lester’s mother caught them with whiskey.

A red-shouldered hawk swoops through the clear sky. Its calls nearly drown the Lester remembrances out. One man remarks, “Lester’s spirit, right there.”

Beatty lifts a shot to the sky.

“I guess it’s drinking time,” concludes Charles LeBuff, an 80-year-old ex-guide who went on to a career with U.S. Fish and Wildlife. He also wrote a history of the Wonder Gardens.

Each slug the Old Overholt before a shot is poured in front of Lester’s grave. Someone, they joke, should keep an eye out for Lester’s mom.