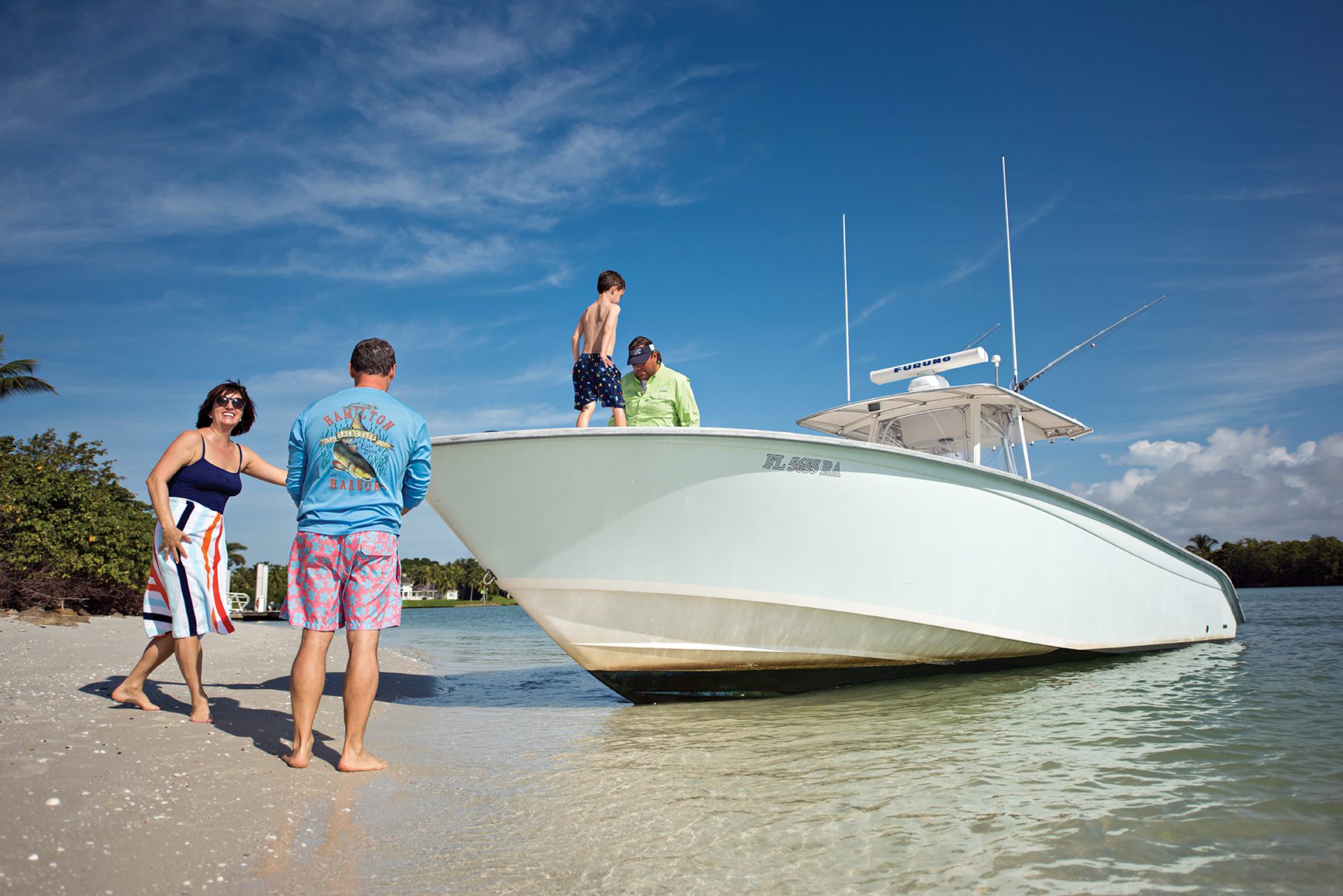 It began in the way of most great follies: with a flute of Veuve Clicquot.

It was the first night of the ninth annual In-Water Luxury Boat Show at Hamilton Harbor Yacht Club in Naples, a members-only affair complete with ice sculptures, surf and turf delicacies, and state-of-the-art vessels bobbing alongside the candlelit deck. The guests were all smartly turned out yet comfortable—khakis, not cummerbunds. That’s important because I’m married to a man who does not do cummerbunds.

Full disclosure time. I had been granted special dispensation to attend the private boat show party on behalf of Gulfshore Life, but it wasn’t my first time impersonating a dues-paying member. In fact, I’ve been wangling invitations to Hamilton Harbor for years—ever since my son Charlie’s nanny, Britta Schulze, made the mistake of showing me a photograph of him enjoying lunch on an elegant teak deck with a pristine water view.

“Where was this taken?” I asked Britta, thinking of the sad tuna sandwich I’d eaten at my desk at work.

“At Hamilton Harbor,” she said. I assumed Hamilton was the name of some chic waterfront eatery in Old Naples until Britta and her husband, Marc, invited us to join them for a morning of boating followed by lunch at their private club. A charter boat captain with the aptly named company Saltwater Magic, Marc Schulze has been at the helm of fishing and sightseeing tours around Naples Bay, Gordon Pass and the Gulf for five years. While no business can be conducted at Hamilton Harbor, it makes the ideal post-charter setting for Capt. Marc to relax and trade tales of fishing glory with other anglers after a long day wrestling kingfish. Britta spends most of her time these days selling the Naples lifestyle as a hardworking Realtor, but the Schulzes have become family to us, and we are the sort of family who visit. Often.

It’s what happens on the water that makes us truly grateful to live in Naples. The best moments of our week involve collecting seashells on Keewaydin and building sand castles on what we call “Wedding Island,” the small beach on the Port Royal side of Gordon Pass where Britta and Marc exchanged vows in 2010. Reformed northeasterners, we’re glad to have traded snow and traffic for the calm, peaceful rhythms of the Gulf lifestyle. We’ve been in Southwest Florida for a dozen years, but when we encounter a dolphin, we’re as thrilled as tourists on their first excursion. We know there are other excellent yacht club options in the area, but thanks to the Schulzes, we’ve never made it past Hamilton Harbor.

“Could we join?” I began asking my husband, Tom, every few months.

“Why would we join a yacht club when we don’t own a boat?” Tom would very sensibly reply. I hate when Tom is sensible.

I grew up spending summers on the water in Wellfleet, Cape Cod. Boating has meant magic to me since I was a little girl. It must be in our blood because Charlie greets all bodies of water with the same enthusiasm.

Despite our guest status, Charlie has been treating Hamilton Harbor like a second home for years. When we arrive, a pretty blonde named Carie greets us warmly as Charlie dashes through the store to the main offices, hunting for candy from Membership Director Pat Schulz. Next, Charlie loves to challenge members of Marine Operations to a race, running alongside their golf carts.

“Look out, Usain Bolt!” a smiling young man named Wycliffe calls out to him as Charlie surges into the lead.

At lunch, server Nick always trades some good-natured smack talk with Capt. Marc, and then he spoils us with all the mini corn muffins we can eat. The club’s dramatic, circular, high-ceilinged teak clubhouse features one of the best kitchens in south Florida, commanded by executive chef David Schue, along with a mesmerizing marina view.

No trip to Hamilton Harbor is complete without a visit to the manager of the fuel dock, Amy, who gives Charlie shrimp to feed her “pet” snook.

Hamilton Harbor is located within 10 minutes of Gordon Pass, along a mangrove preserve—a hard-won location for parent company Collier Enterprises, after many years of litigation over the club’s potential environmental impact. While a boon for Gulf access, the location does come with one significant wildlife-related drawback: The gnats that congregate at dusk are impossible to ignore.

At the boat show soiree, there were no gnats in attendance. I spoke to several members who were quite satisfied with the club’s service and amenities without the snooty airs.

“Everything is elevated except the dress code,” General Manager George Hunt explained. “There’s no event you couldn’t wear flip-flops to, if you wanted. You really only see formal dress here at weddings, and then it’s mainly the bride and groom.”

Maureen Purcell has settled nicely into club life. She and her husband, Pat, own a boat called Weekend Edition, a moniker that makes perfect sense when you learn that they own the Boston Herald. “Everything you could imagine from a yacht club,” she says, “it’s done. The guys are always waiting to help you dock, and of course the food is spectacular.” The Purcells embody the approachable Hamilton Harbor ethos.

A young software businessman named Onur Haytac said, “This is my safe haven. I spend more of my free time here than anywhere else. My favorite thing is the sincerity of the staff.”

After a few sips of champagne, Tom and I decided to explore the glorious boats arrayed before us. We noted the sharp geometry of the Italian Azimut and the all-American beauty of the Hinckley, and then we wandered onto a 44-foot Tiara Coupe being displayed by Galati Yacht Sales, a local, family-owned company.

“You’ll run out of daylight before you run out of fuel,” the salesman assured us.

Next, we sampled the charms of a 45-foot Cruisers Cantius.

“Were these cushions made from the skin of newborns?” Tom asked the shocked salesman. I was glad to note Tom’s enthusiasm for the boat—and that no animals or humans were harmed in the making of the super-soft, marine-grade cushions.

I was most taken with the charms of the 40-foot Sea Ray Sundancer, a handsome, well-designed express cruiser. I’ve heard about Sea Ray boating events for years, and was delighted to learn that Hamilton Harbor offers similar multi-family outings and “Women on the Water” seminars, along with themed dinners and wine events. Senior salesman John Dean of MarineMax demonstrated the joystick technology that has been saving marriages and paint jobs up and down the Eastern seaboard.

“If I bought this boat, how long would it take you to teach me to dock it?” I asked him.

“Five minutes,” he said, without missing a beat. After watching his brief demonstration, I believe him.

Back on the dock, I filled my plate with Kobe beef tenderloin and wild mushroom risotto prepared by a chef who had been flown out from the Collier family ranch in Montana to help make the night a success. No expense had been spared.

Maybe it was the champagne, or the culinary delights, or the new joystick technology. That night, as we drove home from the party, I decided to make a serious pitch to join the club. I played my 10-year anniversary card with Tom.

“I think I know what I want for my present,” I told him.

If the champagne keeps flowing, it’s in the bag.