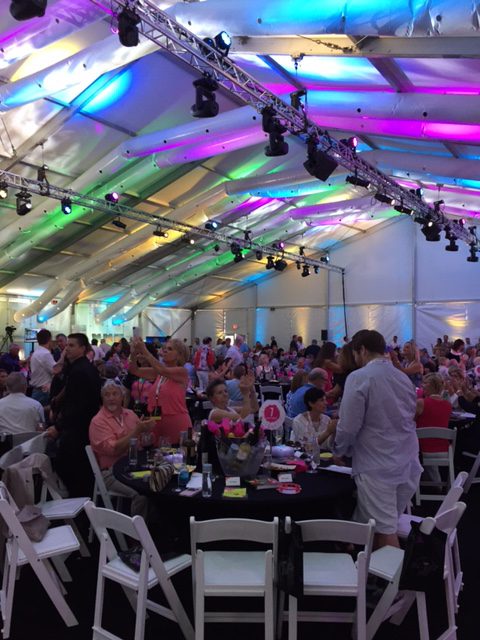 Lee County’s largest annual fundraiser has done it again. The 2017 Southwest Florida Wine & Food Fest brought in $3.2 million to be distributed by SWFL Children’s Charities (the nonprofit that organizes the festival) to the Golisano Children’s Hospital of Southwest Florida, Florida Gulf Coast University and Florida SouthWestern State College. The 2017 theme was "Uncork the Power of Giving," and it was embodied to the fullest by so many, from the chefs who cooked their hearts out—both for vintner dinners at private residences on Friday and for the Grand Tasting at Miromar Lakes on Saturday—to the hundreds of people who raised their paddles at the capstone live auction on Saturday.

FACES BEHIND THE FEST

Christin Collins and Debbie Toler (above left), co-chairs for this year’s festival, put plenty of panache into the event. As they greeted people in a receiving line as they entered the Miromar Lakes clubhouse on Saturday, guests were treated to bubbly from a glamour girl decked out in a champagne tree skirt. Outside, more pours awaited as people took their etched souvenir tasting glasses and worked their way around stations set up by the pool. In all, 13 wineries and two distributors were represented, with V Madrone Cellars as the honored vintner. The boutique endeavor is known for its Cabernet, and it recently gained new owners, Mark and Jill Schratz (above right), who left jobs in the corporate world to run the operation with a few other partners.

Another noticeable touch was the addition of gorgeous floral arrangements decorating some of the tasting stations—more so for what was in the vases, an apropos reuse of bottles and corks (above right). As for the food, 16 chefs from throughout Southwest Florida set up camp with cocktail party bites. Mini forks were a kind gesture for the “pork and pancakes” by Summerlin Jake’s chef Richard Howze (above left). But the dish of braised meat atop cornmeal with truffled chantilly and pea shoots was so good, it was easy to down it whole (and even easier when sweetened with the maple syrup hot sauce).

At the festival for the first time was Continuum by Tim Mondavi, a budding project from Robert Mondavi’s son and his own children. Before branching out, Tim helped create Opus One, his family’s super-wine that garnered praise from Old World vintners and critics. Like with Opus One, Continuum makes one wine, a Cabernet Sauvignon-heavy blend. Tim’s son Dante was pouring the 2014 vintage with Katy Krumpholtz (above left). “My dad’s a great dad and a great boss—I love working for ‘the man,’” he said. He also made sure to mention RAEN Vineyards, a label he started with his brother Carlo, that’s focusing on Pinots and sustainable agriculture (the acronym stands for “Research in Agriculture and Enology Naturally).

Williams Selyem (last year’s honored vintner and one of California’s best Pinot producers, period) was on-hand with its 2014 release (above right). Winemaker Jeff Mangahas also surprised guests with a rare bottle of Chardonnay. To put things in perspective, Williams Selyem makes 18,000 cases of Pinot Noirs annually—but only 400 to 500 cases of Chardonnay. (By the way, Pinot lovers take note: Sojourn Cellars, a festival first-timer, also had some pretty fantastic offerings.)

By the time the drum line Riot Parade (above left) started ushering people into the auction tent, the word around the pool was that the foie gras (above right) from Café & Bar Lurcat’s Michael Mueller was something to write home about—and was it ever! The perfect cocktail-size bite of tiny toast capped by an airy poof belied its complexity, because what resulted was a never-ending firecracker of subtle sparks from kumquat confiture, hazelnut granola, pink peppercorn, shiso and chamomile. (P.S., Mueller is serving a variation of it for the new Pacific Northwest “Voyage” menu at Lurcat.)

ONE LAST SIP AND BITE

As everyone was flowing into the tent, quite a few people lingered to grab a final snack from the food fair. Ocean Prime stood out for serving its tuna appetizer and a refreshing cucumber gimlet (above left), one of the only cocktails, and it went down like lemonade that hot afternoon. A sweet ending was provided by chef Andy Hunter of The Bay House, in the form of beignets and fried strawberries (above right, top), a departure from his usual oysters. But as festival faithfuls know, he always has a surprise after the crowd starts breaking up. This year’s was his pimiento cheese (above right, bottom).

A gigantic, white, state-of-the-art tent made its debut this year adjacent to the clubhouse to host the live auction (above left). Trustees of SWFL Children’s Charities and sponsors, including title sponsor Hostess, made sure that every expense to host the weekend was covered so that every last dollar raised during the auction—in addition to ticket sales—would go to local kids. A heartwarming note of thanks greeted each person as they sat down (above right) from patients at the Golisano Children’s Hospital, the festival’s primary beneficiary. As the program kicked off, everyone let out loud cheers upon hearing the construction of the new medical facility was ahead of schedule, with the facility now slated to open May 10, 2017.

Longtime emcee and NBC2 anchor Kellie Burns (above left) and auctioneer Scott Robertson got paddles flying immediately. The opening prize, a week for 10 couples in North Carolina, took in $40,000 alone. As bidding on the 39 other lots got underway, there were priceless flashes of generosity from trustees, attendees, vintners and chefs. Mueller offered to duplicate his private dinner lot, for example, to bring in $60,000 rather than $30,000. Another serendipitous moments came when Jane and Charles Sawyer (above right), who had been spending more time at their Miromar Lakes house this winter, saw the festival was going on and decided to buy tickets—and then wound up being crowned with the winners’ top hat and tiara for Lot No. 7, a Mediterranean cruise for $27,500.

Yes, trips around the world, a collection of 100-point wines, a golf outing with Olympian Michael Phelps and the idiosyncratic “Pass the Hat” (an annual tradition in which people drop in anything from Rolex watches to FGCU scholarships and the winner takes all) got the attention and bids they deserved. But two real showstopping moments of fundraising didn't offer a "prize" in return.

Twin 5-year-old artists Leo and Lola Grabinski (above left), who began their lives with 98 days in the NICU at Golisano Children’s Hospital, joined Burns on-stage with other former patients to present a painting they made that will hang in the new hospital building. People lodged pledges that totaled to $180,000 to have their names appear on a wall plaque next to it.

And Burns, participating vintner Shari Staglin of Staglin Family Vineyard, and a local mother implored the crowd to give big to the year’s fund-a-cause for mental health initiatives. Their stirring pleas drew on how the issue has touched their own families. (Staglin’s son, Brandon, a Dartmouth grad and member of the vineyard’s team, struggled so much in his youth that the family created their own foundation to help others.) Joe Anderson (above right), owner of Benovia Winery and one of the festival’s biggest benefactors over the years, was the first to raise his paddle to pledge $50,000. This was even more impressive given that, just minutes before, he had donated a week aboard his private yacht for Lot No. 20. People dug deep into their pockets, and the final bid brought the fund-a-cause's total to an even $1 million.

After the 40 lots were auctioned off, the celebration continued with bourbon and cigars at the Six Bends Harley-Davidson after-party that featured more eating (courtesy of local food trucks) and live music.