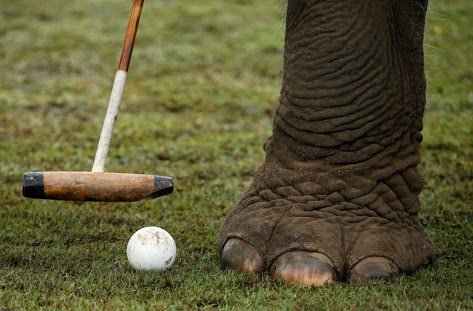 Picture a swanky, charity polo event set on an exotic bank in Thailand.

Now picture the horses replaced with a parade of elephants.

One Naples man didn’t have to use his imagination to see just that.

David Partridge, 53, spent the past week competing in one of Thailand’s largest sporting and charity events, the 2017 King’s Cup Elephant Polo. The annual occasion is exactly what it sounds like—polo, but with elephants. This year’s tournament marks his third time competing in the games since their inception in 2001. David was joined by 40 other players from all over the world. He and two other players were the only American riders.

The four-day competition took place during the week of March 9 near the shoreline of the Anantara Resort in Riverside Bangkok, Thailand. Among the spectators were the royal Thai family, notable philanthropists, celebrities and sports fans. The diverse mixture of athletes and attendees made for a unique experience, Partridge says.

“It’s a really fun time playing with such an international cast of characters from all over the world,” he says.

Due to the nature of his job as a pilot, Partridge has lived and traveled in many parts of the globe. And as a former college polo player, he developed a fond love for the sport. His colorful journeys connected him with like-minded people, which led him to be invited to participate in the King’s Cup.

A concept that started out as a playful conversation between two eccentric sports lovers evolved to be recognized as one of the largest and most globally renowned events in the Thai calendar. When first introduced to the idea of riding “elephant-back” and driving wooden balls with an extra-long-handed mallet, Partridge was immediately enthused.

The rules of the game are mainly the same, minus the animal in play and the time it takes to complete each match. It’s a much slower pace, Partridge says, and more of a challenge because of the elephant’s height. However, the animal’s docile and intelligent nature makes the sport an incredible experience.

The tournament’s fundamental purpose intrigued Partridge as well. It first launched as a way to better the lives of the decreasing pachyderm population. Because they are such triumphant symbols of Thailand’s history, the elephants are treated with the utmost care and respect. Through the partnership between Anantara Resort Hotel chains and the Golden Triangle Asian Elephant Foundation, tournament proceeds are used to ensure their safety, sustenance and overall well-being—including helping to build the first Thai elephant hospital. In addition, donations raised have gone toward funding a new therapy program for children with autism.

“Similar to the horse programs we have here in the states, there is a magical synergy between the elephants and children,” Partridge says. “It’s pretty amazing.”

“It really is about the elephants and the various charities,” Partridge continues. He hopes to return to the tournament next year. “The pomp and circumstance are secondary. It’s about helping the elephant’s welfare and the program with the children. It’s just a wonderful thing.”