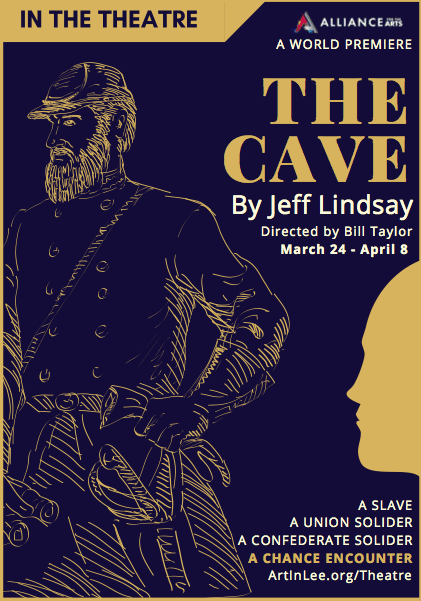 Southwest Florida author Jeff Lindsay is best known as a novelist, but his literary career was born on stage.

The Dexter series author earned double master’s degrees at Carnegie Mellon University in playwriting and directing. In his post-graduation youth, he started a theater company in Los Angeles with the “brilliant idea” of having his troupe members support their live theater habit by working TV and movie gigs on the side.

Needless to say, that didn’t work out, and Lindsay turned to writing novels. No regrets, he says, but he did long for an opportunity to return to that first literary passion.

And he found it. The Cave, Lindsay’s first play in 25 years, premieres Friday, produced by Theatre Conspiracy, the resident company at the Lee County Alliance for the Arts.

“I was really happy to have the opportunity to do this,” Lindsay says.

The Cave is set during the Civil War and tells the tale of three men: an escaped slave, a blind Confederate soldier and a Union deserter who hide out in a cavern, seeking freedom and survival.

Inspiration struck during a chance visit to Linville Caverns in North Carolina. A brochure noted that Union and Confederate deserters as well as escaped slaves had gone into underground hiding there. Lindsay immediately thought: What if they were all there at the same time? What would they say to each other?

He decided immediately that his story would be best told as a play, but he wasn’t thrilled with his draft.

Enter Theatre Conspiracy founder and artistic director Bill Taylor. Among his troupe’s initiatives are a new plays workshop and a playwriting group.

Lindsay says he’d long admired Taylor’s work and asked the director if he would assemble a group of actors to read The Cave to help Lindsay with his revision process. Taylor did, liked what he heard, and before Lindsay knew it, his play had a spot in the 2016-17 lineup.

Taylor, for his part, says the fact that the well-known author had sought out his company was “a boost of confidence” for him and the troupe. “It’s been a great experience so far,” he says.

Learn more about author Jeff Lindsay in our December 2016 interview about his love of Florida.