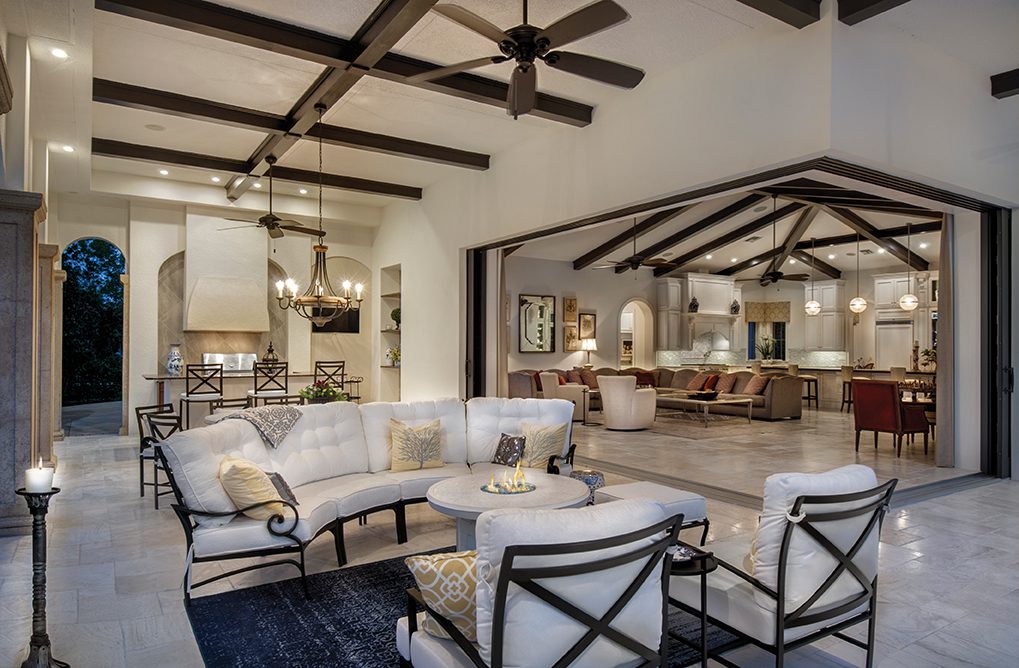 What do you get when you combine British clients with an American architect and a French builder/interior designer? A beautiful home with continental undertones and a serious ability to entertain.

With 6,300 square feet of living space under air (9,150 total under roof), this four-bedroom, four-and-a-half-bathroom Quail West estate is a testament to international cooperation and good taste. Perched majestically along a lakefront, the recently built Dan Sater-designed property informs guests immediately that they’re not going to experience the traditional Mediterranean home that Naples has become famous for.

“I think we wanted something that was a little on the English side, but without being a cottage,” the homeowner says. “And I think we created an interesting home from the front. We get a lot of compliments because our garden is a little different as well. We’ve gone for the more formal look, with holly trees and podocarpus hedging around the house so that we’re tiering the house around the outside to look more European. And when you step inside, you have these incredible long lake views.”

But before your eyes can get anywhere near the lake, they first take in an impressively tiled foyer with 24-foot-high ceilings, which carry over into the formal grand salon. That area also features a unique curved bar, which feels as much like a piece of furniture as any bar you’re likely to belly up to. In fact, the floor of the bar is sunken 18 inches to allow for the barman to be eye-to-eye with his customers.

Just off that space is a lovely turreted dining room with a 26-foot stepped ceiling and second-story windows that would look at home in an abbey. Builder/interior designer Karine Rousseau of Michelangelo Homes appointed a double mirror on both sides of the dining room, making it appear even larger. But she also hid two secrets behind those mirrors: one is a door that opens into the butler pantry and main pantry, and the other is a double-sided mirror that looks into a spacious wine room when its lights are on.

But for less formal gatherings, guests tend to gravitate toward the large kitchen and family room, which open into an expansive outdoor space with its own kitchen and oversized pool. Easily capable of hosting parties of 50 people or more, the family room has the feel of one at an old English country estate. The design anchor of the kitchen is the colossal island covered in rich dark wenge wood. Rousseau added dark beams across the ceiling of the family room to compliment the wenge and also break up what would otherwise be a massive area of white.

And while the family room, kitchen and outdoor living space may be British-casual, you could argue that the master suite—and particularly the master bathroom—has gone French-royalty. The shower is built into a domed turret, giving the room exceptional acoustics. (We’re told the homeowner has a lovely singing voice.) “Most showers today look like carwashes—you go in one side and out the other. I didn’t want that,” says Rousseau, who used to design palaces in Saudi Arabia before moving to the United States.

Another perfect example of what can happen when nations work together.