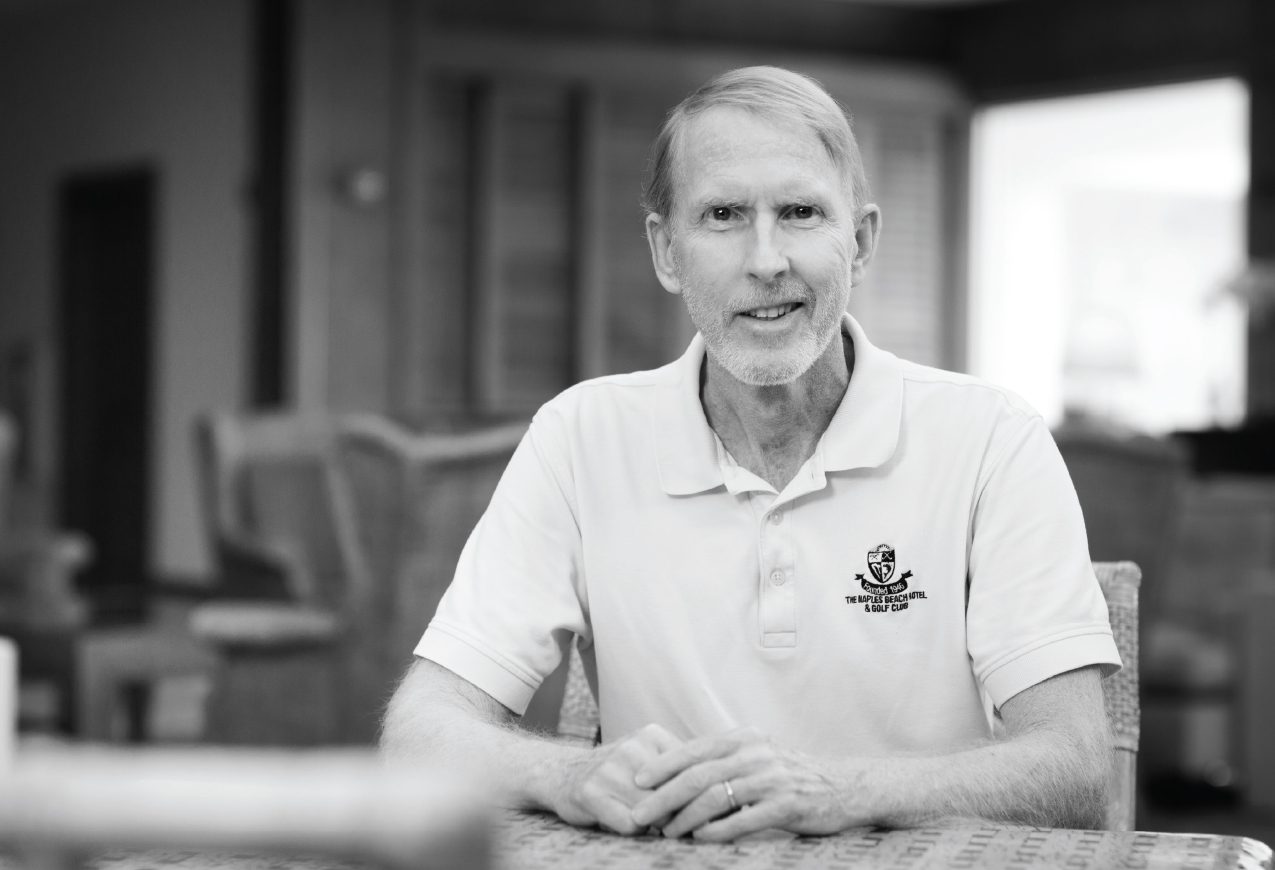 Michael Watkins understands the attachment people feel to The Naples Beach Hotel & Golf Club, both longtime visitors and locals, including those who have never spent a night in one of its rooms. He knows generations of people have met up at the beachside bar for sunset cocktails, to attend charity galas or for SummerJazz on the Gulf. So he knew that when he made it public that the ownership group of one of Southwest Florida’s most venerable institutions was exploring all options—including its sale—people would take notice. He just didn’t expect it would be the only thing they wanted to talk to him about.

Editor’s note: Due to poor health at the time, Watkins had difficulty expressing himself during the following interview. Therefore, it was conducted with the hotel’s general manager, Jason Parsons, acting as Watkins’ voice in many cases. What follows are not direct quotes, but paraphrases compiled from both men in the same interview held in Watkins’ office.

On the changing nature of downtown Naples

This city will always be in a state of redevelopment. The small houses have been replaced by bigger houses. That’s not a change, but an evolution. Every property owner is constantly evaluating the best use of his property. Every business owner is evaluating his business. It’s pretty natural that we would do the same. That doesn’t mean there is going to be change to what we are doing. It is our hope to always have a hotel on this property.

On the public nature of the exploration process

It used to be that you could do your due diligence privately without people finding out about it. But that’s just not the case anymore. Someone somewhere is going to notice, and then people are going to be talking about it. So we were upfront about it. The number of people asking us has eased a bit since October. It was shocking at first for people, but now they are getting used to the idea.

On operating the hotel and club during this period

We haven’t made any decisions yet. But it hasn’t changed the way we are operating the hotel. We haven’t not moved forward with a project because of this. We are still every year evaluating what the hotel needs and taking something off the list. Can we do a big full renovation like The Ritz or JW Marriott on Marco? No. But the fact that $10 million was just invested in a new golf course should say something about the fact that this is still a business we believe in.

On the changing nature of tourism

People don’t come down for the two- or three- week vacations anymore. Now, you are lucky if you get four, five or six days. And they’ve changed the way they recreate. It used to be sailboats and now it’s paddleboards. But the big difference is technology. The newer properties are built with the technology component integrated, but that’s something we have to work on. People are still connected to work. It’s no longer that you told everyone at the office you’d be back in two Mondays and you’d tune out while you were gone. All that work would be waiting for you when you got back. Now, people are working more and more on their vacations.

On the blessings and curses of running a resort in Naples

We want you to know you are in Florida every moment you are on our property. That’s why you are coming to stay with us. If you can’t tell where you are, then we aren’t doing a good job. We are lucky to be in a place where people don’t mind paying $450 a night. That allows us to keep our focus on providing a great guest experience.

It also makes it difficult to recruit and retain employees. Naples is an expensive place to live. Wage rates are something everyone in this industry is constantly looking at. It used to be that people who worked here would often come from Fort Myers or even Cape Coral. But now there are more and more places for them to work in Estero and Bonita Springs. So why would they drive down here? It’s a big concern, but it hasn’t stopped us from getting the job done.