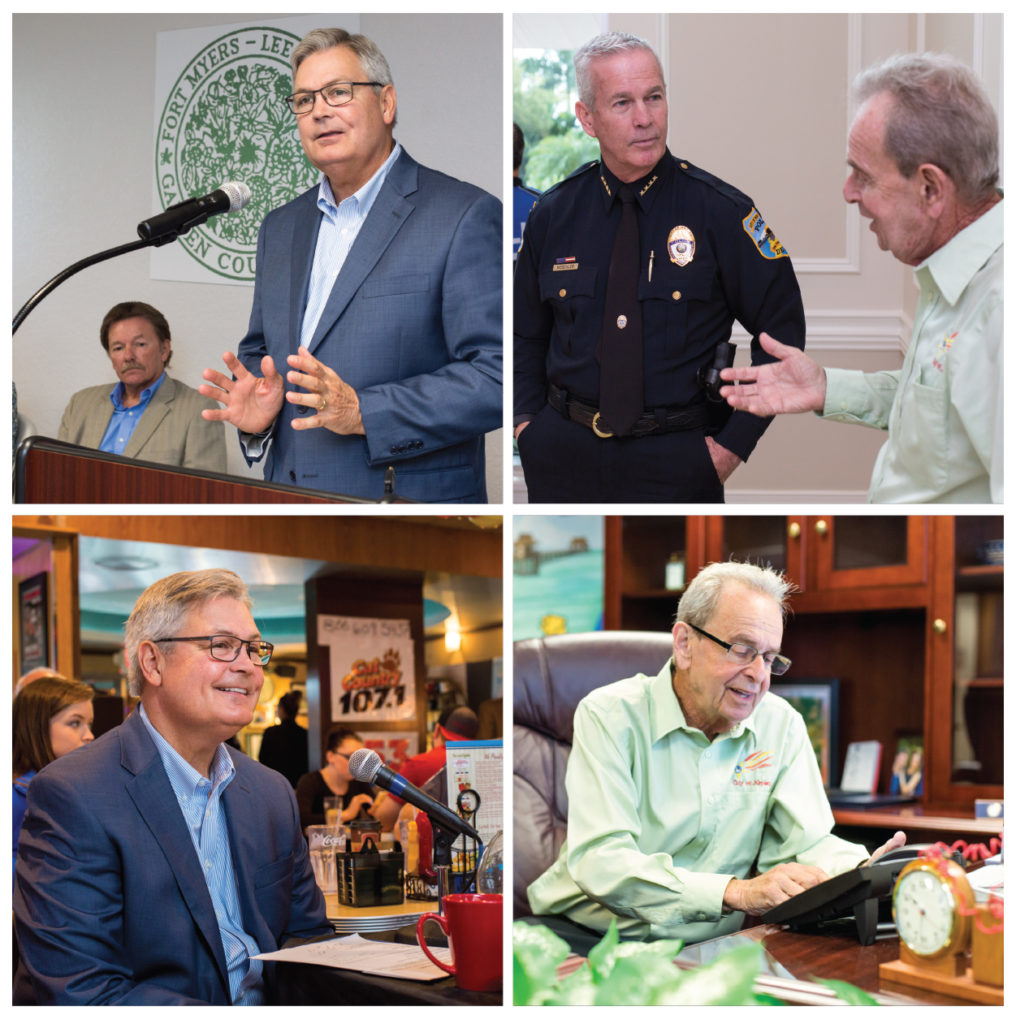 When my editor told me his idea for shadowing the mayors of Fort Myers and Naples and stepping into their shoes if allowed, I thought, What fun!

I’d get a slug of power with no responsibility, no fundraising, no compromise and only a minor amount of exchanging germs. As I would soon learn, when you are mayor, everyone wants to shake your hand. Some people even want hugs. Visions of cutting grand-opening ribbons danced in my head.

Mayor Randy Henderson greets me outside his office on a recent Friday, which is his light day “if there is such a thing,” he says.

First on our agenda: a radio fundraiser for Golisano Children’s Hospital.

Henderson calls to his assistant: “Do you need anything? I’ll bring you back some whiskey.” She’s been sick, he says, explaining the joke.

As we walk out, I wonder what it’s like to work in a building named for your late father-in-law. Humbling, Henderson says. Mayor Oscar J. Corbin served from 1967 until 1976. Henderson is married to Corbin’s daughter, Ginny. Henderson moved to the city in 1979 after meeting Ginny at college in North Carolina, where he’s from. “I fell in love with Ginny. I fell in love with Fort Myers.”

Henderson hangs his blazer before climbing into his 2008 Tahoe. Today, he’s sporting a relaxed look: no tie. He’s formal in a Southern gentleman way. He refers to his late mother-in-law as Mrs. Corbin, though his in-laws lived next door.

As mayor, he gets lots of requests for his time. “I probably overdo,” he says. There are limits. (Don’t ask him to sit in a dunk tank.) Helping to raise money for Golisano was a no-brainer. He shows off a photo of his only grandchild. A gifted surgeon repaired her heart when she was a baby. His voice cracks, “She’s going to have a normal life.”

Before the radio interview, Henderson scribbles his name and title on a paper for the DJ, though everyone seems to know he is the mayor.

He offered to see if they’d let me on-air, too, but it’s clear the radio people want to hear from the real mayor, so I drift into the background, dodging and annoying the waitresses shuttling eggs and hash browns through the packed restaurant.

Before leaving, he shakes hands with all the public service workers and makes them grin with quips about the strengths of their grips. Next up: a dedication of the Fort Myers-Lee County Garden Council building.

“I always support the gardens because they keep the lipstick on cities,” he says.

We laugh. He will repeat this line later to the garden ladies.

“What time was I supposed to be here? Ten?”

We kill time chatting in the parking lot. For the most part, being mayor is fun. If it weren’t, he wouldn’t be planning to run for a third term. “Nobody makes me do this. I volunteer, and when you do that, no complaining allowed.”

The hard part, the stuff that keeps him up at night, is his city’s violent crime. He keeps his cell on at night. This summer, he first heard about the Club Blu shootings that killed two teenagers from a resident who called in the wee morning hours.

Of all the photos I’ve seen of Henderson, one, taken at a prayer vigil during a rough stretch of crime, sticks in my mind. His hand shields his eyes, his tears. He doesn’t try to stifle emotion, but he seeks to be the source of strength for the residents. “But the way I’m made, you can’t control it.”

“Excuse me, coffee for the mayor!”

A woman navigates the group of mostly older women inside the newly renovated building for the area garden councils. I help myself to coffee this time.

He wins the crowd with the lipstick line.

A woman brings him a plate of leftover sheet cake. Outside, a woman stops him. The chains on the swings at a park need to be longer. Another asks how the stained glass windows in a church can be saved. He pulls over the city manager to listen.

“See what happens to Randy?” laughs one woman. “We pin him to the wall.”

Events like these are where the nitty-gritty work of the city gets done. And also, at the grocery store. “You wouldn’t believe how much I get done at Publix.”

“I’m going to take some executive privilege here,” he says, before stopping at his midcentury home off McGregor Boulevard to drop off the leftover cake for his wife. “Ginny and I both have hopeless sweet teeth.” Downtown is great for lunch, but it would be a three-hour affair. “We’d hear every story known to man.”

Over cod and potato salad, Henderson shares the best part of being the mayor: seeing downtown projects come to fruition and seeing the city he dreams about come into view.

His office boasts a sweeping view of a historic downtown that boasts local restaurants and shops. That is the kind of charm he wants Fort Myers to be known for, a la other great cities of the South, like Savannah and Charleston. It’s getting there. He hates when people down south (he’s talking to some of you, Naples) say downtown Fort Myers isn’t safe. (Zombicon, the downtown festival where an unknown shooter killed a man in 2015, he points out, was an isolated incident.)

People from outside of Fort Myers are coming downtown. They’re coming and they’re eating. They’re going to Florida Rep. “We begged for a day we’d have a parking problem, and it’s here. It’s here.”

We part ways before a tax appointment for his real estate business. “Everybody deserves to get off early on a Friday.”

I love this about the South. Tonight, if I were really the mayor of Fort Myers, I would be nibbling Cheetos and sipping a half-glass of merlot in an evening routine that began with his mother-in-law. There would be plenty of cake for the weekend.

If you want to do lunch with Naples Mayor Bill Barnett, ask him to breakfast. Barnett prefers breakfast meetings. You’re not groggy afterward. You get more done. It’s quick, and Mayor Barnett is an efficient man.

He does not linger over his blueberry waffle. It’s a Monday. Go time.

Mayor Bill sits down with his 9 a.m. appointment: a lifestyle coach he met at a Blue Zones meeting, where she shared her story of fighting diabetes. The Blue Zones Project is a movement to promote well-being and longevity that Mayor Bill and his city have embraced. “This is not Blue Zones,” he pushes away a large glass jar of taffy as they chat. “I’ve never met a piece of candy I didn’t like.”

Later, Mayor Bill’s assistant offers coffee. It’s good coffee that the mayor buys from The Fresh Market. “I don’t usually do this,” she says, of fetching the coffee. Not even for the real mayor.

A window on Mayor Bill’s computer opens to Rolling Stone. His cellphone ring is Eric Clapton’s Layla. So, he’s a little rock and roll. I want to know more. We maximize the time between appointments.

Barnett came to Naples in 1973 when it was barely a blip. He and his first wife visited, and, in a day, they decided to move from New York.

“It was the most pristine, beautiful place either of us had ever seen.”

He opened a muffler franchise, but not before a monthlong stint flipping Big Macs at what he says was the first McDonald’s in Naples. It’s reassuring that an affluent city like Naples has a mayor who has dabbled in fast food. He aims to be mayor for everyone from the millionaires in Port Royal to working-class residents in River Park. (He lives in the more middle-class Sun Terrace neighborhood.)

His assistant sits next to him with a notepad.

The stickiest matter involves a resident who didn’t want to move her trees from the right-of-way. She wants to talk to the man at the top.

He doesn’t put things off.

She expresses her appreciation for the call before launching into the story of her ill-fated sweet acacia trees.

“The issue is the right-of-way. I feel badly for you that someone from the county intentionally told you they could be planted,” the mayor says.

It goes back and forth like this for a good bit.

Mayor Bill and the city manager review a proposed live entertainment permit that caused neighbors to go “ballistic.” Bill Moss worked with the Edgewater Beach Hotel to revise the permit to soothe concerns. Should they send the changes to the people who complained?

An out-of-breath woman rushes in. She’s a friend and a political consultant. He’s officiating her wedding, something he will do free-of-charge. People of a certain stature like to be married by someone of a certain stature. In Naples, that’s the mayor. Several years ago, he married the now late Anthony Quinn to his third wife.

“Zsa Zsa!” The mayor bolts from his seat to greet his Old English bulldog, a rescue, that zooms into his office. He pulls treats from his desk. This, it seems, may be the only mayoral task for which I’m qualified this day, so I sit at his desk and dole out kibble.

He drives us to lunch. His license plate reads MAYOR-12, for his time as mayor. The plate has a downside. “You can’t use hand signals if someone cuts you off.”

His Mustang creeps through a snarl of traffic near U.S. 41.

“Ah, I hate this traffic,” he murmurs.

Traffic, he says, is one of the city’s biggest issues. The city is trying to fix it, but the infrastructure hasn’t kept up with the growth of the county. In the city, they’ve managed growth, he says, but they can’t halt it. “You can’t stop someone from building a mega-house” or from coming to Naples.

After speaking to a room of fifth-graders at a DARE (Drug Abuse Resistance Education) graduation, he smiles out at the fidgeting group. This is not his first DARE graduation. Nor will it be his last. Maybe disguising boredom is an art all mayors learn. But he seems to genuinely enjoy being there. His smile was as big as when he greeted Zsa Zsa. I’m not sure how many DARE graduations I could attend with an unwavering engagement. This is why I would be a terrible mayor.

He has plans to visit a sick friend and later the dentist.

We don’t stay for cake.

Apart from their very distinct stances on sheet cake, the mayors of Naples and Fort Myers exude a sense of approachability. They love their cities, and they love being the mayors of their cities. When the woman groused to Henderson about the length of the swing chains, I thought, Really? Call the rec department. Henderson listened intently. But to feel like the mayor, you have to be the mayor. You have to be open to complaining strangers and pre-dawn phone calls. There are not a lot of boundaries. Your ear belongs to constituents. Both mayors realize this, and so do their constituents. I, on the other hand, just wanted to cut a ribbon.

Sadly, no ribbons were sliced in the reporting of this story.