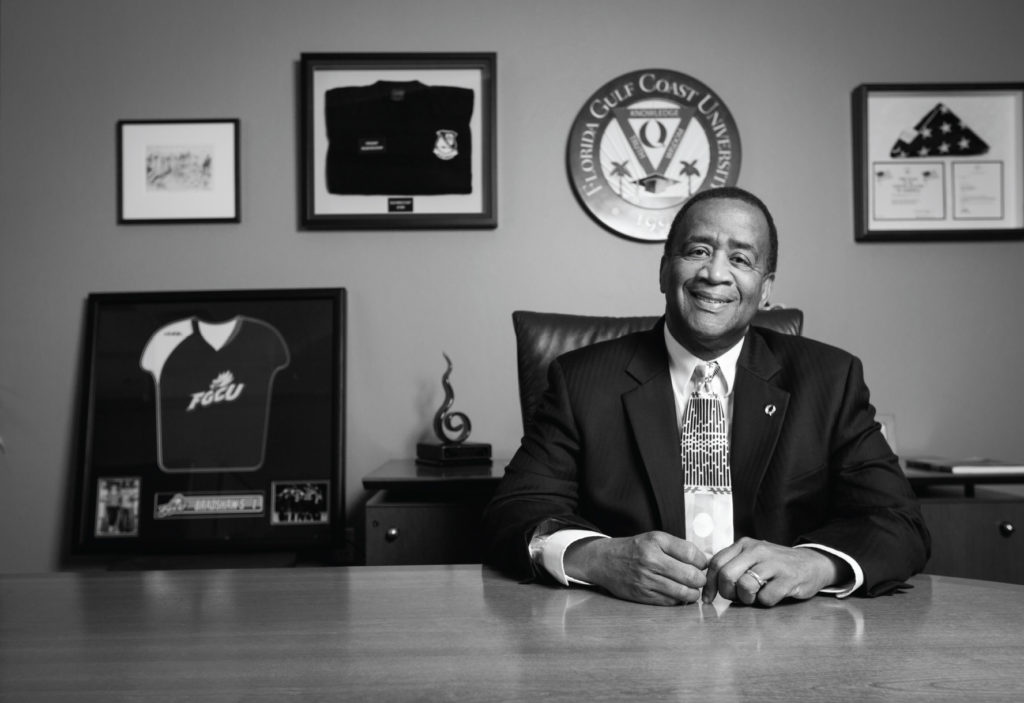 By the time he steps down from his post next month, Wilson Bradshaw will have served as president of Florida Gulf Coast University for half its existence. When he started, the university was just beginning to realize its potential but growing at a rapid rate. Now, while there is still a good amount of formative work to be done by his successor, Michael Martin, the rate of change has slowed to a manageable amount. In 10 years, FGCU became a Division I sports program, added its first and then several subsequent doctoral programs, expanded its student housing and briefly became internationally famous as “Dunk City.” Today, Bradshaw is looking forward to slowing down but proud of the legacy he leaves behind.

On the pace of his first year at FGCU…

“You never know the specifics of a situation until you are actually on the ground. But I knew it was going to be a challenge. It was an exciting first year. We were transitioning into Division I, trying to accommodate tremendous growth, building new buildings, adding more faculty and staff. It was just a year of moving very fast.”

“Maybe now we are getting mature as a university. We intentionally slowed the rate of growth. Now we are growing 1 to 3 percent a year, in part because our funding is now based on success of our students, not solely on enrollment. Now we have a critical mass of laboratories, classrooms and offices. Though, we are rapidly maxing out the space we have. But the rate slowed very intentionally. We are adding new programs, but it is in response to what the community needs. We added doctoral programs in nursing and physical therapy and our physician assistant program is about to come online. Early on, our roots were really spreading fast. Now our roots are going deeper.”

On completing the transition from commuter school to residential campus

“Early on we were lucky enough to have Roy McTarnaghan, one of the great minds in higher learning in Florida, as the first president. His vision was to maximize the distance learning concept. But when he stepped down, the trustees brought in Bill Merwin. Bill’s vision was different. He wanted to, and the trustees wanted to, make this into a more comprehensive university. By the time I got here, that was the direction it was headed. Now we have Division I athletics. There are more than 200 clubs and organizations on campus, Greek, non-Greek. But we still have a lot of students using online learning. So really we have the perfect mix of both.”

On goals for students not always met

“We want to admit students with a high probability of success. We are providing incentives for them to take 15 credits each semester so they can graduate in four years. If students complete a degree in four years, we will reimburse them for the out-of-pocket tuition they paid their first year. … We are helping them choose a major sooner, prolong their stay in that major. Really, we are more intrusive about helping them. We are not where we want to be at FGCU when it comes to graduation rates. It’s very important to not only the trustees but to all of us.”

On what he wishes he could have accomplished

“Typically, university presidents have a long list of things, a list no one would be able to accomplish. I thought I would be able to develop a research-based Ph.D. program, and we haven’t done that. I see that happening in the next few years with our marine sciences department. But none of that was as important as responding to what the community said we needed. We are an upstart when it comes to higher education. People are amazed at what we’ve been able accomplish in a mere 20 years.”