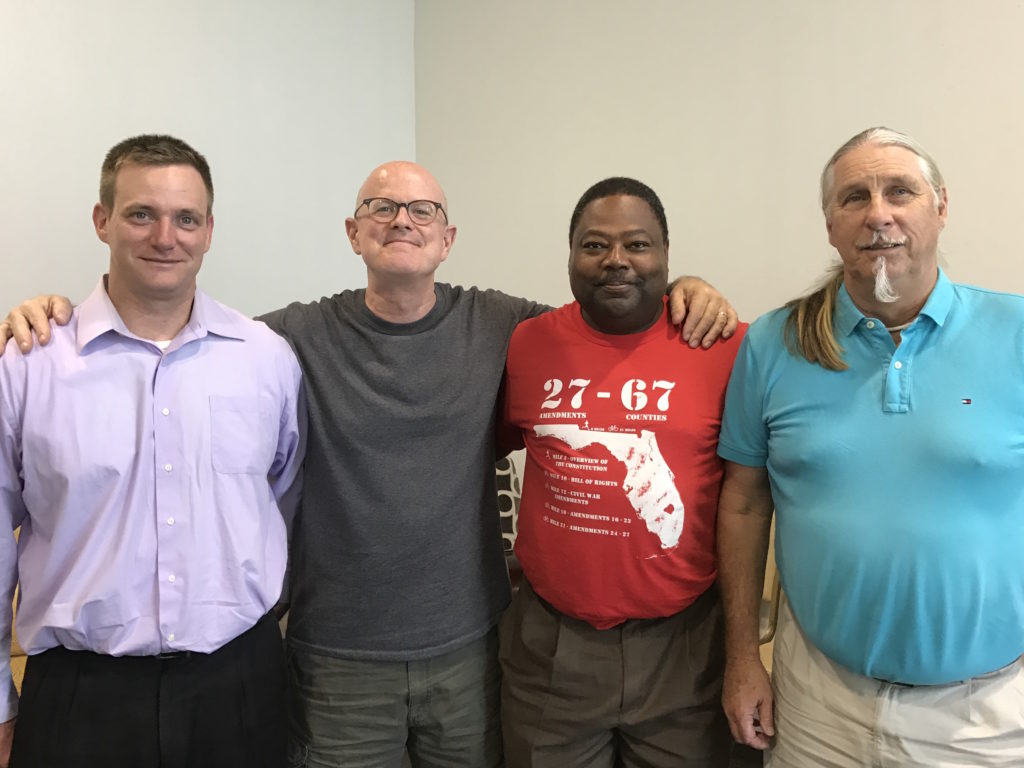 Just about 1 percent of American adults serve in the U.S. military. The other 99 percent of us have no idea what their jobs are like, how it feels to experience combat or what it means to serve an organization that most of us have reduced to stereotypes.

And that becomes a problem, especially when they leave the service and reintegrate into civilian life.

That’s why four Southwest Florida veterans will get up on stage and tell their stories in three performances starting this weekend. They’re hoping to bridge the gap between soldier and citizen, dismantle the myths and ease the discomfort that often arises when civilians try to ask vets about their experiences and vets try to answer.

“When I got out, I had a very good support network and loved ones there for me,” says Jason Calabrese, 42, of Naples, who spent three years in the Army immediately following the Sept. 11 terrorist attacks. “I had a lot to live for and the best possible scenario to come into. That being said, there is still a big adjustment. … I was fortunate to come back without any physical scars, but I think it’s impossible to come back with no internal scars.”

He’ll join three other men in “Telling: Southwest Florida,” scheduled this weekend at the Wang Opera Center in Naples and next week at the WGCU studios at Florida Gulf Coast University.

The performances are part of the Telling Project, an organization dedicated to helping veterans across the country discuss their military experiences (in Florida, it is partnering with the Florida Humanities Council). The project was born out of founder Jonathan Wei’s experience teaching former vets in Eugene, Oregon. He quickly realized he didn’t understand anything about their previous lives—how they had trained, what they had experienced, what they were going through now that they’d left.

“They didn’t really trust conversation, and with good reason: Not that anyone had ill will, but it was awkward and people would ask awkward questions,” Wei says.

Wei, a writer, director and producer, teamed up with Fulbright Scholar Max Rayneard and eventually came up with the idea of having veterans tell their own stories, like a play. He started conducting extended interviews with vets and then helped the men and women condense their tales into a script.

The first “Telling” performance in 2008 featured his Oregon students. Since then, some 300 veterans and their family members have taken the stage. The Southwest Florida performances will be the project’s 50th site.

“The military is a figment in the minds of most Americans,” says Wei, who is now in Austin, Texas. “The fact of the matter is it’s an experience and a life for every person that’s in it. … We feel it’s important that we as voters and taxpayers and citizens understand this is a human experience, not a political one.”

Calabrese says he gained much from the experience and looks forward to sharing the production with Southwest Florida audiences.

“In our presentation, we have individuals from the Vietnam War, the Cold War and from Iraq. We’re kind of blessed in that regard where the audience can get perspective on all three (experiences), and we can learn from each other,” Calabrese says.

The performances will be held:

Thursday, May 4, at 7 p.m. at WGCU studios on the FGCU campus

There is no cost to attend, but reservations are required. Reserve a seat here.