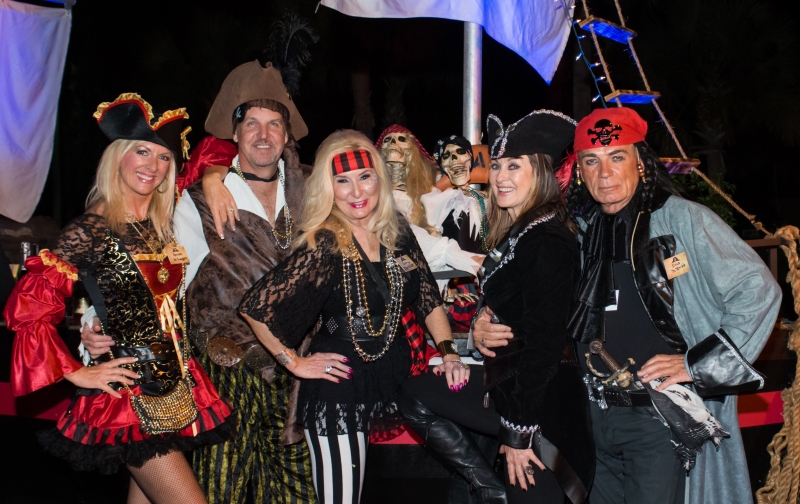 These stood out among many a successful, swanky and surprising fundraising effort.

Best greeters: It’s hard not to feel the warm and fuzzies when you’re welcomed by four or five golden retrievers. The pups were at the Port Royal Club for Third on Canvas, which benefited both PAWS Assistance Dogs (hence the furry friends) and Friends of Foster Children Forever.

Best star power: It’s pretty hard to top the one and only Andrea Bocelli, who performed at the American Cancer Society Bucket List Bash.

Best “Listen up!” moment: Around the Southwest Florida Wine & Food Fest auction’s $2 million mark, emcee Kellie Burns of NBC2 silenced the patrons and entertainment. Burns tearfully turned to the focus of the next lot, mental health, and her impassioned plea spurred another $1 million in donations.

Best cast of costumes: Patrons really go all-out for the Golisano Children’s Museum of Naples’ annual Pirate Ball, and this year was no exception. Eye patches and tattered garments never looked so good—and the energy level seemed higher than ever, with guests dancing from the minute they arrived until it was time to depart

Best reason to raise a glass: The Naples Winter Wine Festival recorded its second-highest fundraising since its 2001 inception, with more than $15 million going to the Naples Children & Education Foundation between the event’s live and online auctions in January. The Southwest Florida Wine & Food Fest, held in February, also came just shy of its all-time high, successfully raising more than $3.2 million for SWFL Children’s Charities.

Best dazzle for profit: One donor dazzled even brighter than the others at the Guadalupe Center’s Dazzle fundraiser. The generous guest announced a matching bid in the middle of the action—if 100 other donors would likewise contribute $1,000. Nearly all in attendance obliged, helping the organization get to $1.5 million.

Best (and biggest) centerpiece: The elegant creations at the Mending Broken Hearts with Hope Luncheon, benefiting The Shelter for Abused Women & Children, nearly scraped the ceiling of The Ritz Carlton Golf Resort, Naples tent. The arrangements designed by event chair Annette Pakula and the Ritz floral team started with a tall glass vase housing a decorative butterfly, and its crowning flowers of sumptuous purples and pinks were stretched even higher by delicate faux branches and more butterflies.

Best musical surprise: The trustees of the Naples Winter Wine Festival surprised their guests with an original song, For the Children. And it just wouldn’t be the wine fest if they didn’t tap an award-winning songwriter, Monty Powell, to help them pen it—and perform it. Powell and the eight co-chairs sang the moving lyrics just before the Fund a Need lot, which ended up raising a record amount. Coincidence?

Best dessert delivery: An Evening for Better Tomorrows, an annual event for JFCS of Southwest Florida, dropped a few jaws when the meal’s sweet ending—a chocolate mousse—arrived tableside on the head of a kneeling waiter.