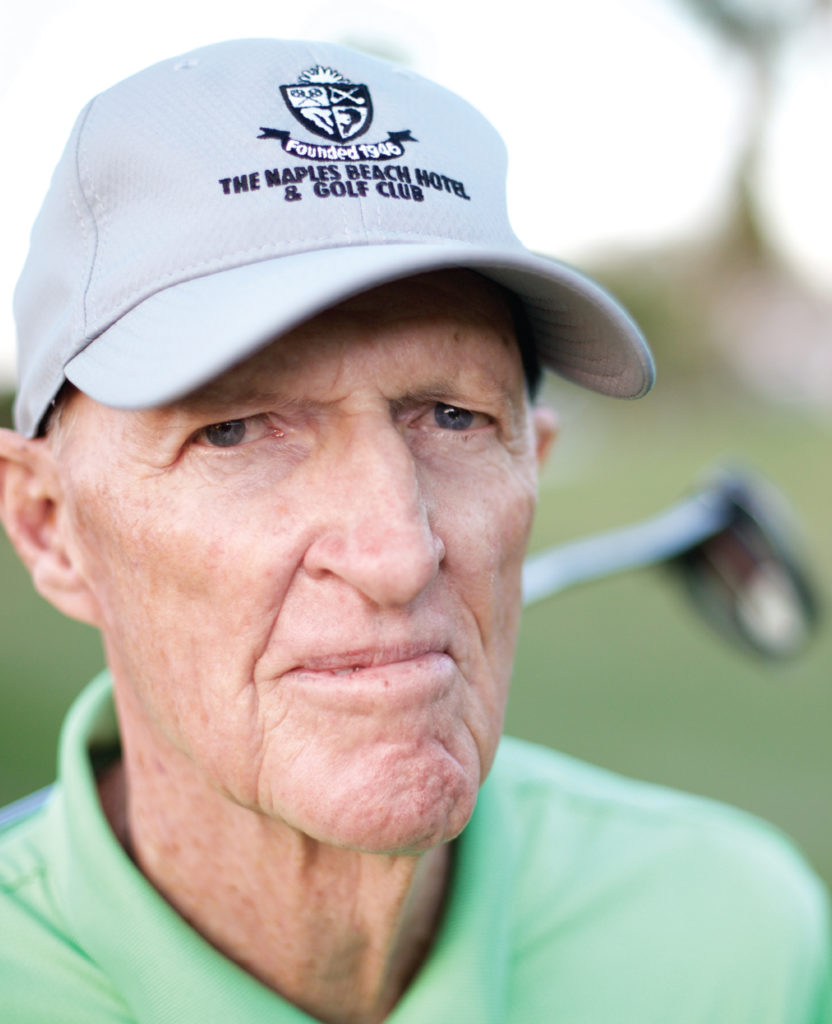 The boy watched as tracer bullets lit up the night sky like fireworks. “How pretty,” he thought. War through a child’s eyes. This was life to young Billy Lowry. Thousands of miles away in his native America, children his age were starting elementary school. Billy was confined with his mother to the walls of the Santo Tomas internment camp in Manila, where battles waged just miles away.

His father was an engineer from the Midwest who found work in the Philippines and brought his family. Initially, it was an exotic life, but still, a relatively normal one. Then World War II happened and everything changed.

Bill Lowry is slim and angular, younger- looking than his 79 years perhaps because of his dedication to exercise. He swims regularly. He plays golf and teaches it at The Naples Beach Hotel & Golf Club. His enjoyment comes from meeting people from all over the world—just a 15-minute conversation with a stranger will make his day.

He’s met hundreds of golfers, and he’s asked them all about their lives. He’s never really broadcast the part of his life that he’s now telling. Never really wanted the story to be about him. He was just a kid.

The elder Bill Lowry was a mining engineer from Michigan at a time when the American mining business was struggling. Bill and his wife, Jean, and 2-year-old son, Billy, moved to a small island in the Philippines. There, Bill worked to extract gold, manganese and other precious minerals from the earth.

Then war broke out. The family was stuck. Stacks of manganese lined the docks. The Japanese were coming for it.

One night, a loud knock came at the backdoor of their home. Bill opened it to find a friend—a Japanese businessman who had a warning: Get out. The military was coming. If they found Americans, they might kill them. The Lowry family went into the hills.

For two years they lived there in the humid jungles of the Negros islands. There was a bamboo hut on the edge of a cornfield where they stayed during the day. Shrouded deep in the vegetation was another hut. It was where they slept.

Many other Americans lived in the jungles, and relied on each other for food, support, communication. Billy’s mother started The Victory News. It was a makeshift newspaper—one type-written page with information gleaned from the radio. But it helped keep morale up among the Americans.

The elder Bill Lowry joined a band of guerillas and would be gone for long stretches of time. During the absences, Billy kept faith that his father would return safe to their jungle huts. But as time wore on, the chances of that happening slimmed.

In late 1943, after the Lowry family spent two years in the jungle, the Americans were caught. Young Billy remembers the Japanese military discovering their hut; men in uniform crowded the small room. Then he remembers fire. Soldiers used flamethrowers to spit fire on their home. It went up in a magnificent and terrifying blaze.

Billy and his mother were shuttled among different jails and holding cells. His mother was interrogated for information on the guerillas. She refused to tell, and her punishments came in beatings. Eventually, she developed an infection on her leg. She thought it’d have to be amputated. But a Japanese surgeon came to the jail one day. He had been educated on the West Coast of the United States. In hindsight, Lowry thinks the doctor took pity on the mother with the young boy. He was able to remove the infection without amputating the leg. The only anesthetic was two swigs of whiskey.

Billy and his mother were shipped to Santo Tomas, a former university that had been turned into an internment camp. They were there with 4,000 other Brits and Americans. He slept in a former classroom filled with cots.

Life in the camp became normal to him because he really knew no other normal. They were only about 15 miles outside of serious combat. He remembers dogfights between U.S. and Japanese planes, the kids peeking out of windows at the sky, the cheers rising up from their housing when smoke started to trail one of the Japanese planes—and the furious Japanese soldiers below who pointed guns to silence them.

He remembers collecting fireflies once, scurrying around campus with a Japanese soldier. He had a glass bottle with some leaves and bark in the bottom and a cap with holes poked in it. They captured the bugs with their hands, then transferred them to their glass cell.

Another incident stands out, even to this day, for Lowry: A soldier told him to deliver a message. A wall cordoned off the campus, but a hole had been blown into one side. Sandbags partially plugged it off and a soldier stood watch with guns. The soldier gave him a slip of folded paper and pointed to a house across the street he could see through the hole. Deliver this message, the soldier said. He left through the hole and stopped in the street. He was terrified. It was one of the first moments he remembers being scared. Essentially, he was free. But he didn’t know what to do with that freedom.

He delivered the message to the military officer in the house and quickly returned to his camp. “Freedom can be a little scary,” he says now.

The boy always thought his father was alive. One day, mother and child were taken to meet a Mr. Lowry. He was in another camp. The boy got his hopes up. His mother told him otherwise. They arrived and indeed saw a Mr. Lowry—the boy’s uncle, who also worked in mining in the Philippines. He was glad to see his uncle. But he also realized that he would never see his father again.

The year wore on, and the war became a lost cause for the Japanese. Food became scarce in the camp. His mother grew emaciated. Their rice rations dwindled. They ate mush with salted fish heads.

The Americans finally came. Feb. 3, 1945. The camp was liberated. A few days later, Gen. Douglas MacArthur arrived. Billy remembers the general vividly. Dark sunglasses and hat, crisp tan uniform. Over weeks, the internees left the camp. Both Billy and his mother had to spend time in a hospital to recover from malnourishment.

The Americans went from military convoy to plane to ship. They sailed the Pacific back into San Francisco, Billy gazing up at the Golden Gate Bridge on a chilly day.

They returned to Massachusetts, where his father’s parents lived. Shortly after, they were finally able to put his father to rest. His body had been discovered in a gravesite on the island of Mindanao. The Army had commissioned him as a captain for his role in organizing the guerillas. He was given a funeral at Arlington National Cemetery.

In the Boston suburb of Newton, a more normal life started to take course. He went on to graduate from Indiana University and held a series of jobs before setting here in Naples about 35 years ago. He’s worked in a variety of capacities at The Naples Beach Hotel & Golf Club, mostly as a golf instructor. He traveled the world, playing in senior tournaments. Now, he’s content to teach. He never married but has been in a long-term relationship.

Over time, he’s filled in the blanks about his time in the Philippines, finding details in books and old news clippings that rounded out what his mother told him. On occasion he’ll reflect on life in Santo Tomas compared to Naples. He came far, both literally and figuratively. But he doesn’t credit himself for surviving. He was just a child. “My parents,” he says, “they were the real heroes.”

Jean Lowry died at age 89 in Naples. Tears fill Lowry’s eyes when he speaks about what she had to endure. She was beaten, starved—and yet she was always hopeful. As she told her son, “I always knew the (Allies) would come for us.” She kept her boy safe and, in turn, gave him hope to live a life free of war.