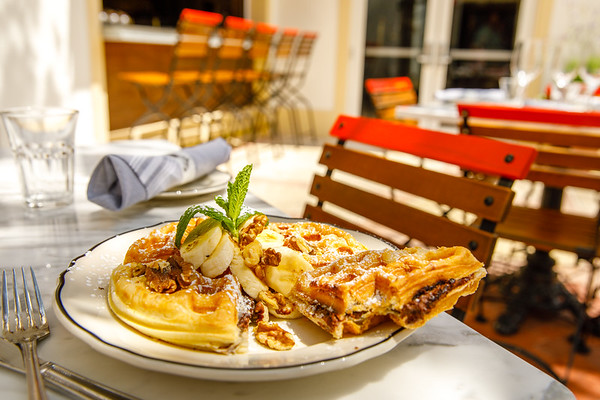 Everyone in Southwest Florida knew to expect big things when chef Vincenzo Betulia opened his latest restaurant, The French Brasserie Rustique, in January.

But, like the seasoned and smart restaurateur he is (he owns the enormously popular Osteria Tulia and Bar Tulia just down the street), he was careful not to bite off more than he could chew. In fact, he surprised some by taking only a limited amount of dinner reservations for the first few weeks and not even attempting brunch or lunch for several months.

Now, though, the kitchen has worked out all of its kinks, and the restaurant is in a groove—and so by the end of April, it rolled out its midday menu.

Of course, it was worth the wait.

The vibe is slightly more laid-back than the electric dinner crowd, and the menu has classic oeuf dishes alongside boulangerie favorites (Croque Madames, breakfast pastries, omelets and waffles). It also has some of Betulia’s nighttime ventures that wade into more modern territory, such as his lamb loin carpaccio with goat cheese and charmoulah, a Moroccan condiment with fresh herbs. As he has demonstrated with rustic Italian cuisine before, he has an aptitude for melding flavors from French spheres of influence with what is popular at the moment with American palates—for both lunch and dinner.