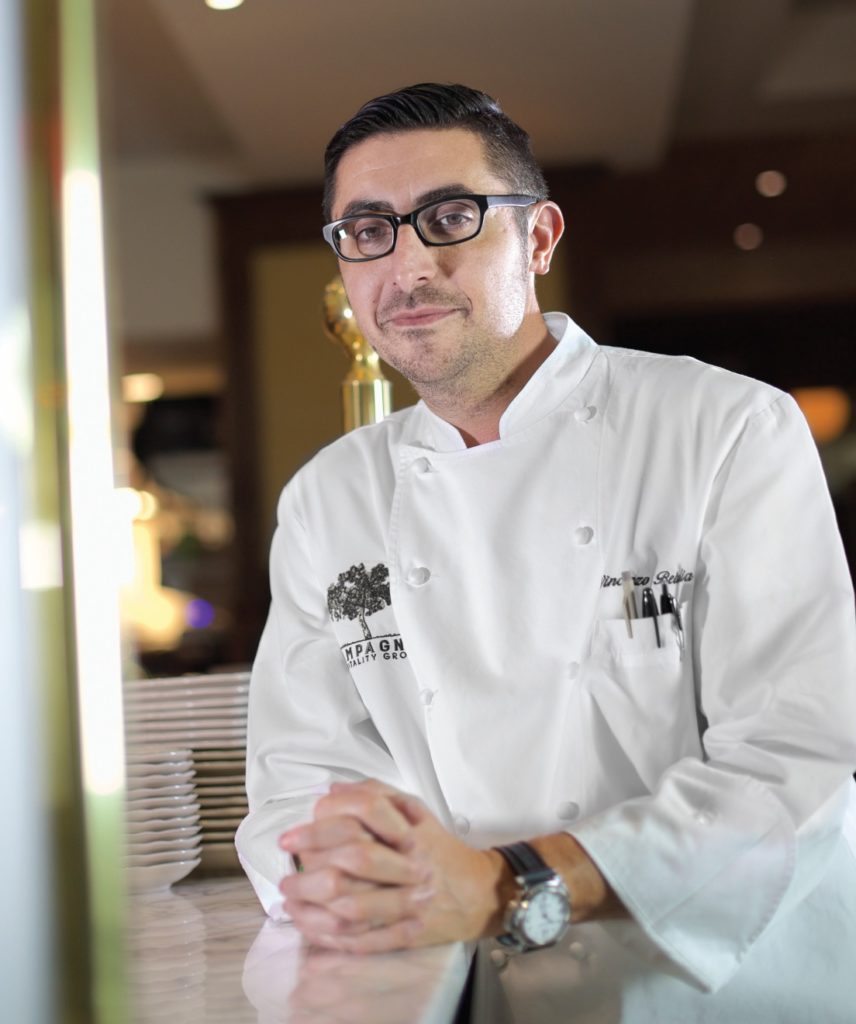 Seven days after opening his third restaurant, The French, chef Vincenzo Betulia stands at the entrance to its open kitchen and surveys the scene. It’s early in the evening, about 6 p.m., but already tables are starting to fill up. Still the kitchen remains relatively serene, thanks to a stringent reservations policy set for the brasserie’s infancy stage to ease the operation’s introduction to the Naples dining crowd.

“We’re still getting our legs underneath us,” Betulia says to me. “Right now, I can see the wheels turning as people are going through each step of a recipe. It should be like muscle memory, but we aren’t there yet.”

Then he pauses, glances toward the salad prep station. “Like there, he’s using too much crème fraiche.”

Betulia walks over to the station and explains the issue to two members of the kitchen staff making the salads. He demonstrates how it should be done, using an amount of crème fraiche that to the untrained eye probably isn’t much different than what his employee had originally put on the plate.

Betulia, 41, knows the little things matter when running a restaurant. It matters to the diners’ experience and it matters to the bottom line. Although most people talk about restaurants, particularly his restaurants, in terms of the quality of the end product, success or failure is determined by more than just making good food. For The French, as for his first two restaurants—Osteria Tulia and Bar Tulia—Betulia is leaving nothing to chance.

Shortly after moving to Naples to take a job at celebrated Italian eatery Campiello, Betulia was walking down Fifth Avenue South with a disposable camera. He took a picture of a building near the corner of Fifth and Third Street South and thought, “That’s where I want to open a restaurant.” When the space The French now occupies opened up more than 15 years later, Betulia showed the picture to his business partner. They had been talking about opening a classic brassiere in the mode of Balthazar—Keith McNally’s legendary New York City bistro. This would be the perfect spot to recreate that vibe in Naples.

It’s been nearly a year and a half since Betulia, his investors and his team started the process of creating The French. Betulia compares the process of opening a restaurant to pregnancy. His wife, Anna, is convinced Betulia uses launching a new place as a weight-loss plan. (He’s down 20 pounds in the past six months.)

Jason Zadorski, Osteria and Bar Tulia’s general manager—and, along with Anna, the front of house yin to Betulia and his cousin Frank Pullara’s kitchen yang—describes the restaurant industry in general as glorious organized chaos.  Inside this chaos is Betulia, serving as the center of gravity around which everything rotates.

The players on the team, which now includes former Truluck’s managing partner Rick Rinella as general manager at The French, truly seem like extensions of one another. They share a collective passion for perfection, even when much of what they do is excellent because of its relative simplicity. Each evening, Rinella constantly juggles the lighting and music volume to complement the ever-changing dynamics in the room. Anna has a strong preference for servers and bartenders who work in hospitality as a career, not for students paying their way through school or looking for a gap-year job. Noting the consistency of the Osteria Tulia and Bar Tulia experiences, a friend of mine suggested it was in part because either Zadorski, one of the Betulias or Pullara—and usually more than one—was always on-site. That way, when something gets off the rails, which can happen almost any night, everyone knows it will be tackled efficiently. Rinella actually started with Campagna Hospitality, Betulia’s umbrella company, about six months before The French opened in order to get fully ingrained in the culture. (Editor's Note: Rick Rinella is no longer with The French. According to a news release June 23, Jason Zadorski will serve as general manager of The French and will continue to participate in the operations at Osteria Tulia. Frank Pullara has been promoted to executive chef at Osteria Tulia, Bar Tulia and The French. Anna Betulia will also serve as the special events director for the restaurant group.)

Zadorski remembers an early night at Osteria Tulia when they suddenly realized their grease trap wasn’t working properly. It wasn’t busboys or kitchen staff who dealt with the problem because the customers needed their attention. No, it was Zadorski, Betulia and Pullara in the back alley trying desperately to clean up the mess and make things passable until the next morning. The grease trap was from a previous restaurant in the building. It was quickly replaced with something that worked better.

The vibe at all of Betulia’s restaurants is a blend of humility and hubris. Betulia will in the same breath both call himself nothing more than a cook and talk about his desire to lead a nationally recognized culinary scene in Naples.

The humility comes from his Midwest upbringing. Arriving here from Italy as a small child, Betulia grew up in Milwaukee in a family that valued hard work. He got into hospitality at a young age, 14, thanks to a friend of his father who needed a dishwasher. Eventually he moved up to the pizza station and spent three-plus years making salads for famed Midwestern chef Paul Bartolotta. “Every day I wanted to be the best I could possibly be at my station,” Betulia says of his early days. “And I worked my way up the ladder to the grill station to sous chef.”

He went to culinary school in Chicago, worked at the city’s revered modern Italian restaurant Spiaggia, then back to Milwaukee. After vacationing in Naples, he took a job as a sous chef at Campiello. A few years later, he was the head chef there.

It was at Campiello that he met Anna, with whom he now has equal numbers of children and restaurants, and Zadorski. Eventually, when Pullara reached out with the idea of moving his family to Naples, Betulia got him hired there as well. (Even though the two were not especially close growing up in different parts of Milwaukee, their instincts in the kitchen seem in perfect sync.) Campiello is also where he met the investor (who asked to remain unnamed and unquoted for this story) who would buy the building and set up the financial backing to start Osteria Tulia.

The hubris comes, in part, from the success he’s experienced since opening his first restaurant. The team’s work to perfect every detail, and then maintain that level of excellence, has made Osteria Tulia consistently one of the best restaurants in Southwest Florida and, according to Florida Trend, the state.

When the space next door opened up, instead of expanding his original restaurant, he decided to execute a new concept. The always-packed nature of Bar Tulia is proof enough of its success.

He hosted a James Beard Foundation dinner in Naples and then was invited to cook at the James Beard House in New York. Short of becoming a celebrity chef or getting a Michelin star, he didn’t have much more to prove.

“I’ve always been looking to go to the next level, asking myself what’s the next step,” he says. While he hasn’t been in a rush to see something new happen (see his nine years at the helm of Campiello as proof), he has had his eye on another rung up on the ladder.

“Vincenzo has more passion for what he does than any man I’ve ever met,” Anna says. “He’s got the talent, but the passion is why I knew Osteria would succeed. We just needed the right people and the right location.”

Sometimes Betulia’s passion might be too much on his sleeve. He initially scared Anna away when he told her early on in their first stint  of dating that he was going to marry her. But that same passion drives Betulia to care about the details, from The French’s hand-painted murals that reminded him of a place in New York to the amount of crème fraiche on a salad plate.

It’s telling that the photo he has framed in the kitchen at The French  is of superstar chef Marco Pierre White, aproned and smoking a cigarette, looking drained from the all-out pursuit of getting some seemingly minor detail just right.

At one point during a conversation, Betulia stops for a moment and walks down the kitchen line at The French. He takes out a spoon and tastes the onion soup, a dish any self-respecting French bistro has to have down-pat. Early on, a diner commented to him that it was too thick. So the recipe got thinned out a bit. A day later, another patron said it was too thin.

“So we’ve been trying to find the right balance where it’s thinner but still has the right mouth feel,” he says.

Then he yells across the kitchen, “Careful with that garlic. I can smell it.”